"Is that the TV from the laundromat?"

"Hey! What are you doing!?", says Bina, trying to shove Kendra back, "Don't look at it! It might be the Botfly!" 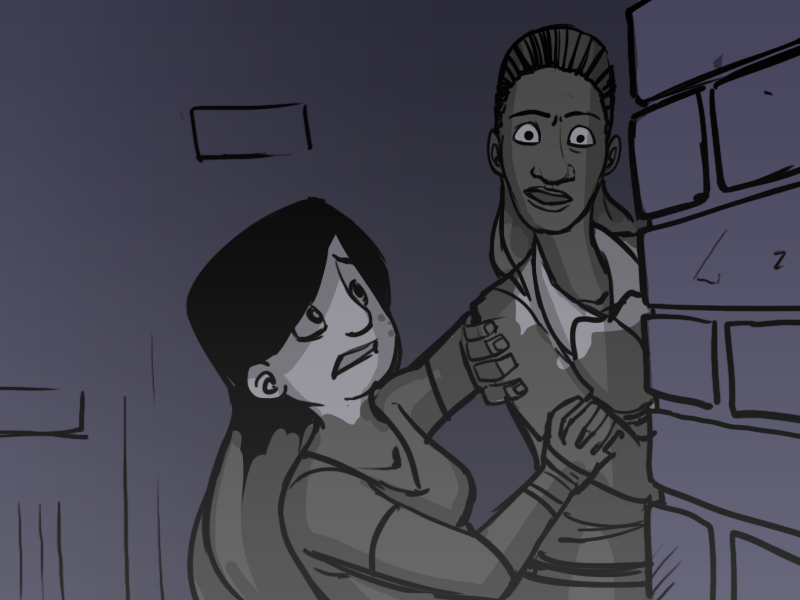 "I doubt it." says Kendra, not moving.

"You said it did funny things in the corners of your eye. Changed shape and stuff. This one is just sort of sitting there."

"Just sitting there, half submerged in mud, in a place it's got no right to be." says Bina, giving up. Kendra weighs about twice as much as she does. "It should be back there behind us in the pile, smashed to pieces, with half a laundromat on top of it."

"Well yes, there is that. Maybe the Russian guy carried it here? Must get boring down here when you're… planning murders or whatever."

"Or maybe, maybe it fell with all the rest of the stuff, like you said, and it sort of got bumped around, maybe bounced a few times, and washed up here because of all the disturbance caused by the building collapsing."

Kendra appears to think for a few second. Eventually she says, "Batteries?"

"Not buying it?" asks Kendra.

tegerioreo:
Bina & Kendra: Resist temptation to see what's on. Creep up behind the TV and tip it facedown into the mud.

"I'll just… I'll just go around behind it and sort of kick it over into the mud."

"Are you sure that's a good idea?"

"Not really, do you have a better one?"

"We could see what's on the screen maybe first. I think it's just static, from the sound of it, but it's hard to tell from this angle. It might be important."

"And risk it giving us both involuntary cranial surgery? No. Kick it over into the mud. That's the end of it. I think there might be a way out up ahead. Lets just -

"Uh, is it supposed to start doing that?"

Jeepers. Bina turned out looking very Disney Princess in that first panel there.

Kytin:
+1 reader. This is a very nice story you have here. As you might be able to tell from my sig, I love time travel.

Hello! Welcome to the forums. Thanks for reading! I like time travel too!