Primary Temporal Position: 2029
Reset Temporal Position
Nerdling365:
I kinda want someone to say "In loop five, with the rest of my lunch…." but I'm not sure which one would say it at this point.

"In loop five, with the rest of my lunch…" says Emmie, wincing. He's sitting in the passenger seat of the car. On the other side of the alley, Kendra opens the drivers side door and swings up into the seat.

"All set," she says to Bina, who is standing on the running board and looking in through the window. "Is everything strapped down back there?"

"Should be!" says Bina. "Amie's just checking our sensitive cargo, but we're almost ready to go."

Bina hops down onto the gravel siding, the damp of her t-shirt clinging to her, her hair in tangled strings. It had taken longer than she'd expected to transfer all the supplies from the Moment to the truck, and the sun is setting.

Water dribbles off the leaves of the bushes that overhang the alley as she makes her way along the body of the truck, leaning on it's painted side for support.

They've seen no naughts, nor any sign of Gregor. They are, presumably, busy with Twelve.

"We ready back here?" Bina calls, banging the side of the truck with the palm of her hand.

Amie grunts at her, a rough affirmative, as she reaches the back of the truck where the cargo ramp is still down. Bina bends down and grabs it, and, lifting, immediately regrets her decision. The ramp is heavy, and awkward, and slithers back and forth from side to side as she staggers forward, holding her breath at the strain.

When it eventually bangs home in it's cradle just beneath the floor of the truck-bed, Amie calls out from the darkness. "What are you doing out there?"

"Putting the ramp back," gasps Bina, more out of breath then she expected by far.

Amie's concerned face appears behind stacks of time machines and supplies. "You ninny! You should have asked for help!"

"Yeah," says Bina, trying to think of something funny to say and failing. "Yeah… probably!"

Amie's hands grab her by the wrists and more lifts, than assists, her into the back of the truck. Carefully stacked time machines and supplies loom around them. There is very little spare room back here now. Bina looks for somewhere to sit and finds nothing, all available surfaces now covered in supplies and boxes. Instead she leans against a stack of journals bound with packing tape and covered in sticky notes. Amie, after checking that the ramp is secured, reaches up and grabs the nylon strap that serves as the handle to the door to the back of the truck. 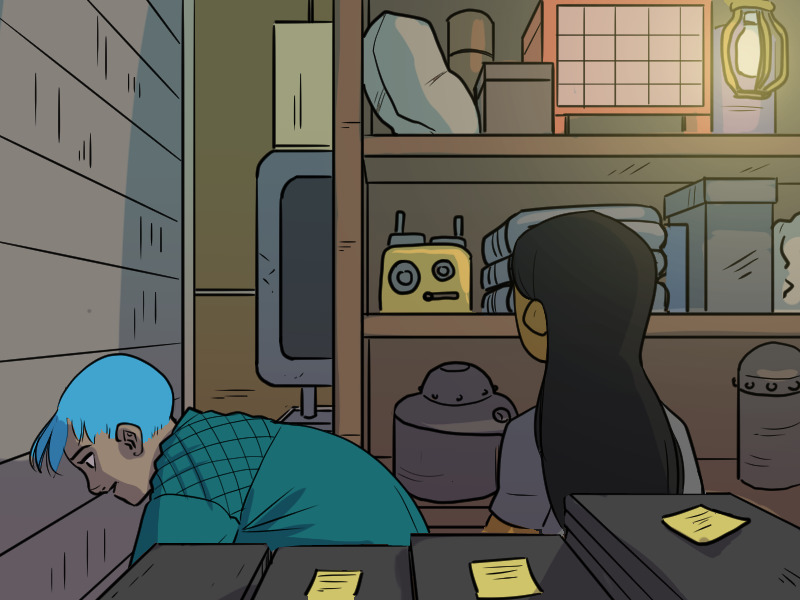 The door shuts with a slam, leaving them lit by a utility light hanging from a wire that Kendra had taped to the inside of the roof. It's dim, and as the bulb swings slowly on it's wire, the shadows wriggle and dance.

"Are we all ready?" asks Bina.

"Almost!" says Amie, worming her way through the closely packed supplies. "I just want to re-seat the Fuzzball in it's box."

Amie's job had been to secure the Weapons before they jumped again. They make Bina a bit queasy every time they move between time-lines with what are, basically, jars full of chronological nitroglycerin.

"Are they leaking?" asks Bina, closing her eyes. She'd been concerned that the paradox charge they'd worked so hard, and risked so much, to make might have been abraded or damaged by moving between time-lines.

"They look good," says Amie, voice muffled by the intervening junk. "All the indicator lights are still on!"

"OK, bang on the front of the truck a little," says Bina. "Let Emmie and Kendra know we're on our way."