From the hall, silence. Bina's pulse beats loud in her throat. Everyone waits for another sound, but it doesn't come.

"I'm out," whispers Three, reaching for the Moment about her neck. "Not doing this."

"I'll build your damned life-raft!" she hisses. "But I have no interest fighting naughts!"

Bina has a hundred other questions, but right now the important thing is to avoid blowing up the time-line or getting caught. From outside, there's a crunching noise as soft waxy feet step on the shattered scrap of what had, up until recently, been the door to the staircase.

Three vanishes in a flash of green light, and, again, the noise outside stops.

Nobody suggests that maybe it's just a clumsy person or an accident.

Amie-Five boggles, eyes wide, at the space that had contained Three just seconds before. "Was that-"

Bina's Amie clamps a hand down over her younger self's mouth, "Shh!" she says again.

"How do we get out of here?" whispers Emmie, slowly and quietly grabbing the duffel bag and slipping the box with the Slingshot in it back inside. He does not do up the zipper.

That is a really good question. They came here by using Twelve's machine, and because she didn't immediately reappear in the same place, it can't be fully NP-Instant. That means that Twelve will show up first, then they will show up later.

And when they show up, they'll be surrounded by even more naughts.

If only problems would show up one problem at a time!

There is a long slow scraping noise out the in hallway, and Bina wonders why they haven't burst into the apartment yet. These naughts are very strange. The ones they'd encountered before, they were like… almost more mechanical than animal. These two are different, persistent but not as deft or engaged as the naughts were in loop Thirteen.

After they'd left Four, Bina had grilled Amie on everything she could remember about their weird stalkers, but Amie hadn't been able to tell her much. They were late loop naughts, based on their appearance, but Amie had described them as sort of listless. Possibly broken. They moved slowly and erratically, and on two occasions when Bina had tried, they had ignored commands to slow down, or leave. It's possible that Gregor had spent long enough creating a set of orders that were specific enough to avoid any kind of post-hoc editing, but something about that explanation feels off to her.

Kendra had clearly been thinking about how to get back to Twelve's loop as well, and while Bina's thoughts wander, she takes the initiative. "All we have to do," she whispers, hefting the Not-Yet up to her shoulder and moving to stand at the corner where she'll be able to get a drop on a naught leaping through the door. "All we have to do is fuzz our vector," she says. "Right? Unlight would do it - just uncover your hand."

Bina nods, but makes no move to undo the bandages. It's not that Kendra's wrong, unlight will work to break their projection from Twelve to Five, the problem is, if they do that, then they'll be moving quite 'fast' along the e-axis of reality. They might keep going, smashing right through the Twelfth loop and keep going, especially if they hit reality at a place where it's already damaged by B12 reappearing. If they hit to close to her re-emergence, then they could crash all the way back down into loop Thirteen.

Bina tries to consider whether that is actually a problem. They probably won't be able to track Twelve down, not unless she wants to be found, and they could get in any amount of trouble hanging around in another loop. Even assuming they used the map, and passive time travel, they still run a major risk every time they jump. They've been lucky so far, but luck runs out.

If it weren't for the truck, the decision would be easy, but that's parked in Twelve's loop, and they absolutely need that bomb, as well as the other two paradox weapons they left in a box underneath the cot. Leaving them was kind of dumb, Bina realizes. They could really use the Fuzzball now.

Footsteps, heavy and staggering, pass the door, and everyone tenses. It's the big one then, the one who looks like a weird sexless bodybuilder with half a dozen heads. The smaller one sounds different, skittery, like a spider.

Is it alone? Their duel stalkers don't usually move on their own.

Bina's heart beats fast and frantic in her breast, as she struggles to tell her disobedient limbic system that she's not in any real danger. They can leave. If they crash through Twelve and land in Thirteen, well, if they absolutely have too, they can go back and get the truck later. It would be an unnecessary burn on the Moment, but they could. They can leave whenever they want.

Her limbic system ignores her brain, dumping significant quantities of adrenaline into her system as the tension in the room slowly ramps up. Is it just standing there outside the door? Bina hopes Mrs. Pak remembers not to look outside.

The footsteps start up again, padding away in an awkward stutter-stop shuffle back down the hallway.

"Let's go then!" whispers Emmie, once the footsteps have faded down the hall. "Let's just-"

"Wait!" It's Amie, their Amie, her voice loud enough after all the whispering to make Bina jump.

"But what about me?" 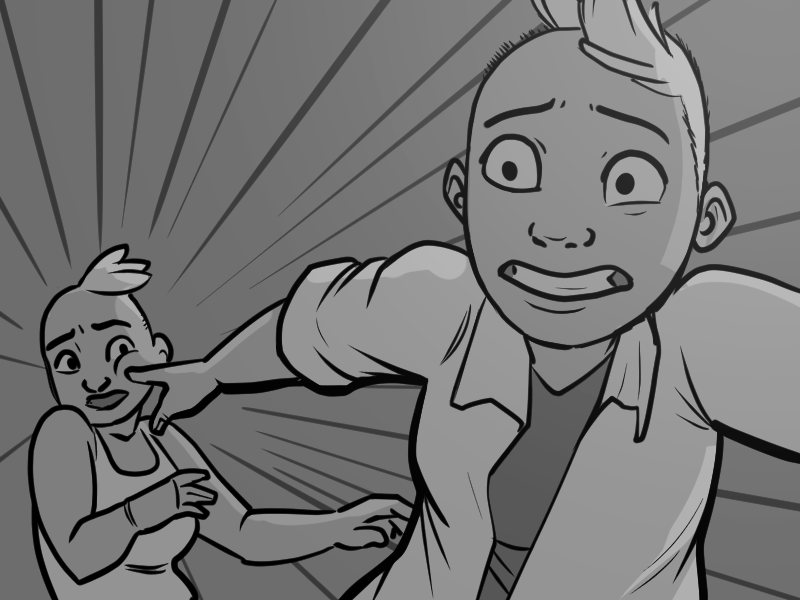