She's cold, and not everything is quite working properly, but Bina manages to get to her feet.

Kendra is not being helpful right now.

Bina considers grabbing the lamp, but her experience with the swiffer doesn't make her particularly confident that it would help.

And that was when this thing was HALF the size it is now.

It's head is the size of her torso. The empty eyesockets of it's skull are dark. This thing would be less disturbing if it had eyes or some kind of ominous glow, but it doesn't. 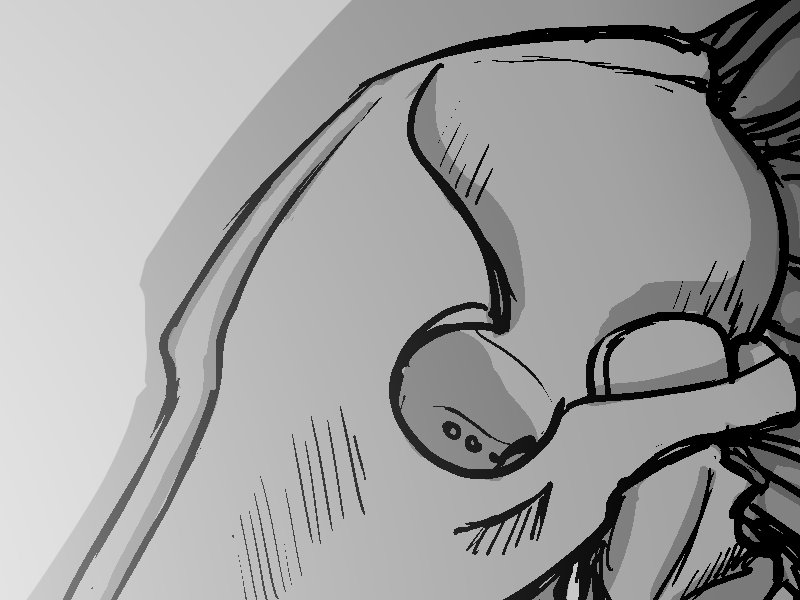 By the time she's managed to get to her feet under her so she can lurch away from the wall, the thing is almost at the bottom of the stairs.

Dang, she'd forgotten how FAST the creature is. With how it's built, it should lumber, especially now that it's so huge, but it doesn't. The dang thing practically skuttles.

A bit too fast on those steep stairs with broken back legs. It crashes into some shelves at the bottom of the stairs. 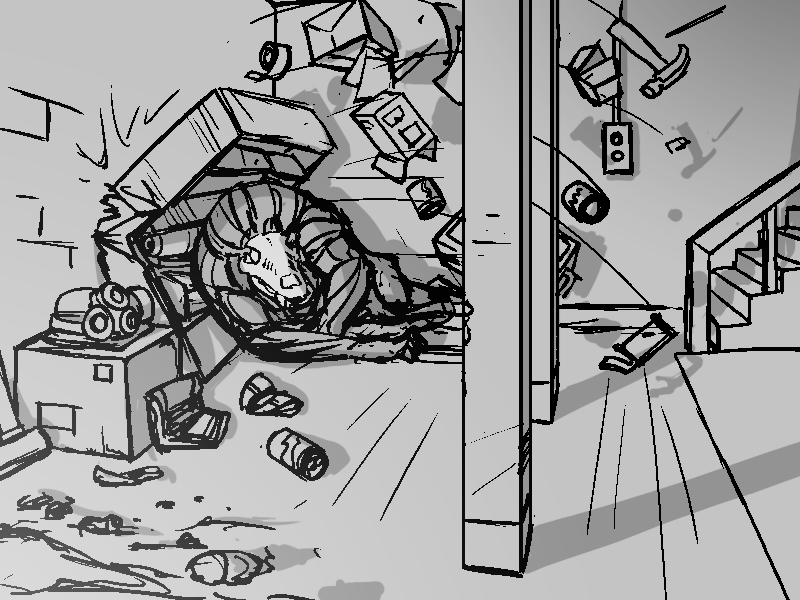 The plywood boards of the cheap shelving unit crumple like wet paper, causing tools, boxes, and half-empty cans of paint to be hurled across the room.

Lacemaker:
I just want to take a moment to congratulate you on your massive improvement in artistry! I read through all the posts in a relatively short span of time, and I went back to Bina's first doggy encounter to make sure this comment works within the overall arc of the story. (I forgot the dog could glow green.) I've always liked that your art is more sketchy than polished; I think it conveys movement much better than some of the more stylized pictures I've seen. Over time you've kept that essential feeling of movement and positioning, but the sketch lines are disappearing, the grey shading is filling in, and your lines are smoother overall. Good job! Also, I like that you've kept it mostly black and white. I think it really compliments the mood of the story, and when you use the lime green it's so much more jarring and eerie than it would be in a world with more color.

Basically, I liked your art in the beginning. But you've grown considerably as an artist, and I thought it'd be nice to take the time to point it out and say, "Good job!"

This was really… validating to hear. This adventure, all 193 updates of it, has been some of the hardest stuff I've ever done, and also the most rewarding.

Thank you again, and to everyone who has spent the time to read and comment on my adventure. Thank you. It means a lot to me.