"Good question!" says Kendra, starting up from the wall as though she expects her double to step out of the shadows at that very minute. Her beat is in this area. "I… don't think so," she says, trying to remember schedules from back before her life decided to nose-dive into absurdity. "No. I'm down there somewhere. I won't even be getting in my van for a few hours."

She waves her hand towards the residential section of streets. "I think," says Kendra, doubt creeping into her voice. "I mean, I haven't thought about work in a while."

"You work around here? Now?" asks Four. "It's like three in the morning."

"Are you going to ticket the Botfly for parking on the grass? Oh! No - definitely for exceeding the time on the meter, right? Because she's been here for a hundred years." 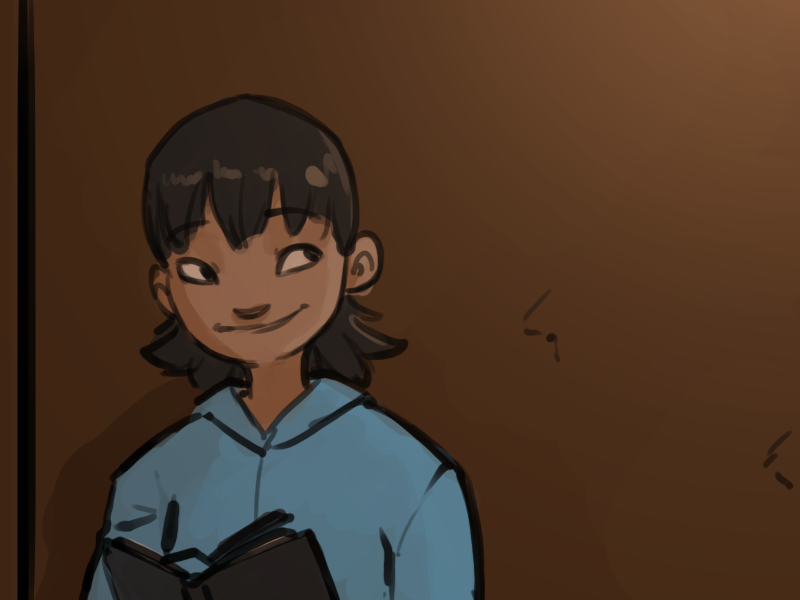 "The fines would stack up," says Kendra, not rising to the bait. "But nah, Gregor thought I was a cop."

"I did eventually get to kick him in the face really hard, so I consider us mostly even."

ZLOK, BIGOT SLAYER:
Aaaaaahhhhhh I've done it! I have achieved the PTP! This is my second read through - last time I caught up just as the hospital adventure was starting, maybe I'll actually stick around this time…

The comic has only gotten better, and back when I read, the PTP wasn't implemented in the website, and this has made dealing with the retcons so much easier for a reader like me.

But yes, even though I knew it was coming, the only having three buttons at the bottom weirded me out. Oh, and this run through took me about two weeks instead of two days ð

Hi Zlok! Welcome to the PTP! Glad you caught up again! I'm glad to hear the retcons are working better now.

matthew:
…Yes. I have achieved PTP… The Tree-Button-Event.
Reader++ (I can use this format too, yes?) and now Conspiracy Theory Time:
I have had no where near enough free time to read the whole archives in two days, or two weeks. I've taken more like two months. But there were some very sleep-deprived nights in those two months. And If Zach isn't himself the Botfly, he's an unintentional slave of it. Think About IT!
We all (Especialy those who binge read) take hours and hours staring at… what we precive to be a comic with lots of GREEN in it. We observe and observe and observe. If the Fantasy-Fulfillment angle is important then Zach is being totally played, and the Botlfy has made him into such a successful author/artist/creator; That's how the Botfly is using him to further it's reach. -To each of US… -and then we go and tell our friends, and more and more come and OBSERVE. Many of us have also personally witnessed the Time-Shenanigans: At Midnight ready Only-One-More-Page… and then it suddenly being 2 am. The Paradoxes too: when we "remember" Kendra and Emmie being engaged, or many other things happening… OR DID THEY? There's no Proof that things WERE the way they NOW-were. Perhaps they Were-Were different… when they first Were…
Zach, I'm onto you… But I've looked at the Botfly too long to turn away now.
>Botfly: Observer-Slave +1