"Well I got the wound closed, and I've got a bandage over it. I'll probably have to shave her hair around the cut later to get the bandage more secure but the bleeding is stopped mostly."

"I -" Kendra starts, and then decides to tell the truth. "I have no idea Bina. She could have a - she could have a lot of stuff wrong with her and there's no way for me to know."

"She needs a hospital. She needs trained doctors. So do you."

"They're all gone though. The hospitals. No more space."

"Yeah," says Kendra, who has been thinking about this. "But that's just here, in the Moment."

"Kendra, my head's all full of goo. I can't think. What are you talking about?"

"I mean that we're here, but out there, in the real world, things are continuing like normal, right?"

"They're not continuing at all though. Time's stopped. That's what the Moment does, right?"

"I'm really tired Kendra, can we talk tomorrow? I want to go to sleep."

"Yeah OK. Don't you worry. I just need you to do one thing ok? After that, we absolutely have to get you into bed." 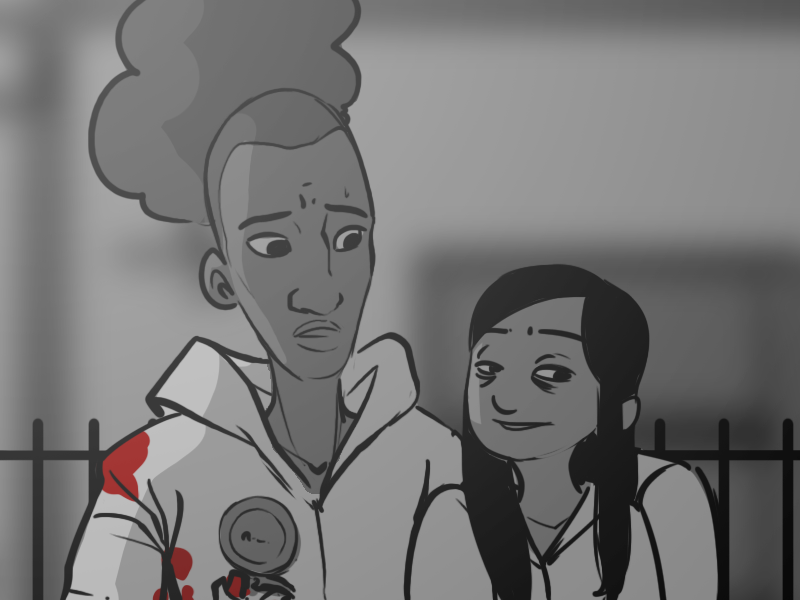 "Well I've errr… I may have engaged in some… idle speculation once or twice about a situation where you might inform me that you absolutely have to get me into bed before putting your arms around me. The context here is uh… not exactly how I'd imagined it."

"I know! I know… sorry. Whaddayou need me to do? Does it have anything to do with that, 'cause we should maybe not carry it around if we don't have too."

Bina points a finger at the watch in Kendra's hand.

Dalmationer:
Exit? What exit.
It leads to a gaping void where once there was reality.

"Just get us an exit vector. We can't go back to where we were, I don't… even know if where and when we were even exists anymore in a conventional sense. I'm… hoping that the damage we caused is localized around the tower and not… you know… everywhere."

The knowledge that they'd destruction of the universe, followed by spending a last desperate few days in this place, as the walls of the end of the universe creep closer and closer, unable to escape until the bubble of nonexistence can no longer avoid touching them, slicing away bone and flesh like a perfect spherical razer has occupied no small amount of Kendra's anxious attention since they got back here.

"Oh good, I needed more nightmares," says Bina, her words a little slurred by fatigue. "That's the lovely thing about nightmares, you can always have more. Thank you Kendra."

"I'm sure it's localized! I mean, we can't have destroyed all of reality. Right?"

"Why don't I check that right now!?" says Bina, with manic enthusiasm.