>Bina: Wonder aloud how one can have a time machine and still be late?

Uuuurgh. This is so stupid! They have time travel! HOW IS SHE LATE!?

Well she knows why she's late. It's Kendra.

Nno, that' not fair, it's her own danged fault for trying to look good in front of Kendra.

She feels extra dumb because, at first, Kendra had said she wanted to do this part.

Bina had said that she was fine, really, she could take the time machine. Her knees were ok, and her ribs hardly hurt anymore. She could do it. Kendra should be the one to hold the anchor and the dummy.

This had been a lie. Her ribs are wrapped in tensor bandages and they stab her every time she breathes, and her knees! Well, its probably best not to talk about her knees.

Worse, after she'd made her claim to vigorous health, Kendra had said that was great to hear, because while she wanted to do the whole 'carrying the time machine and catching Elizabeth' part of the operation, that was actually impossible as there was no way for her to use a time machine without Bina's spooky hand woo woo.

This had made Bina feel like an enormous tool. That hadn't stopped her from asking for only one hour to get into position from their garage landing zone to the government camp.

She could have had three hours, or more. The Entropic Well reached back almost sixteen hours, but noooooo, she had to look strong in front of Kendra.

"It would save them power", she'd said. "And we don't know where Gregor was for most of that time, so we should minimize the possible risk of paradox."

The real reason, the one she didn't say, was that she was hoping it might make Kendra stop treating her like something made out of cracked glass.

Not much chance of that now. No chance at all if she runs out of time and they have to try again.

Rounding a corner she realizes that the last of the light from the entrance has dropped off and it is really dark in the stairway. 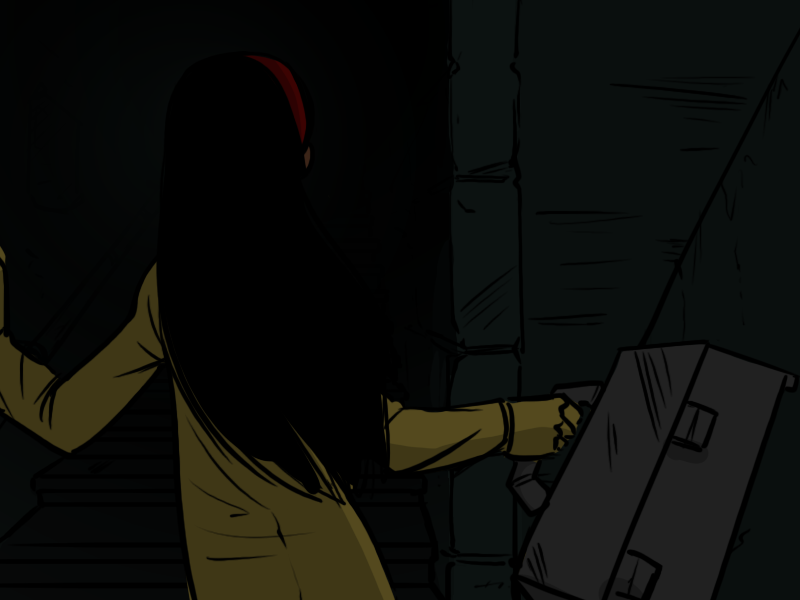 This staircase has no exterior windows. She could try to dig out a light, there are some in the case, but doing so will waste time, time that Elizabeth doesn't have.

She should just keep going. It's only another five flights of stairs. Probably. In the pitch black. If her count is right.

No more then seven.

She should just keep going. Right?

Dave:
Is this going to be a thing? When my friends ask me what the fuck All Night Laundry is, should I just answer, "Giant bug! From space!" and leave it at that?

Can we get that panel on a t-shirt?

BlueMoonHound:
OMG we should do a t shirt yes yes yes

meganopteryx:
I SECOND THIS MOTION. (Or third it)
And Jack if you're looking for a cool place to sell merch, I hear Society6 is a pretty good one.

A couple of people have mentioned this idea before and I might actually have the time to look into it soon.

Thanks for the recommendation Megan!