Primary Temporal Position: 0790
Reset Temporal Position
meganopteryx:
Why don't you just use your spooky hand woo woo to make them work? That's what makes everything else time-travel related work. Maybe it doesn't even have to make that much sense if you have that.

tronn:
>You should test the spooky woo woo hand powers. Can you focus the effect with a lens, for example?

tegerioreo:
Look in the books I guess, but seriously you can't go wrong with spooky hand woo woo.

"So what about unlight? Maybe they need that to work?"

That sounds like one of the things that can go the MOST wrong.

I mean seriously it's called spooky for a reason.

(seriously though do it)

"Err… good idea, but no. The Moment and unlight don't mix very well. If you took off your bandages now we'd get about ten seconds of extremely disorienting shenanigans, then the fail-safes in the watch would kick in and it would close, ejecting us to a random place and time."

"What kind of shenanigans exactly?"

"It doesn't say. Seven tried it once and she described the sensation as… ug, I can't remember the phrase she used. 'Quivering static-filled pillars of liquid nausea' or something. You appear to get poetic when you're puking your guts up."

"Still, it wasn't a bad idea. I mean, everything else runs off that stuff."

BreadProduct:
Maybe they are both broken because they need each other to function?

"OK, well, what about - oh! Do they need to be connected to each other to work?"

"Uh, they do, yeah, but they already are. See that cable on the past viewer? It plugs into the back of this one." 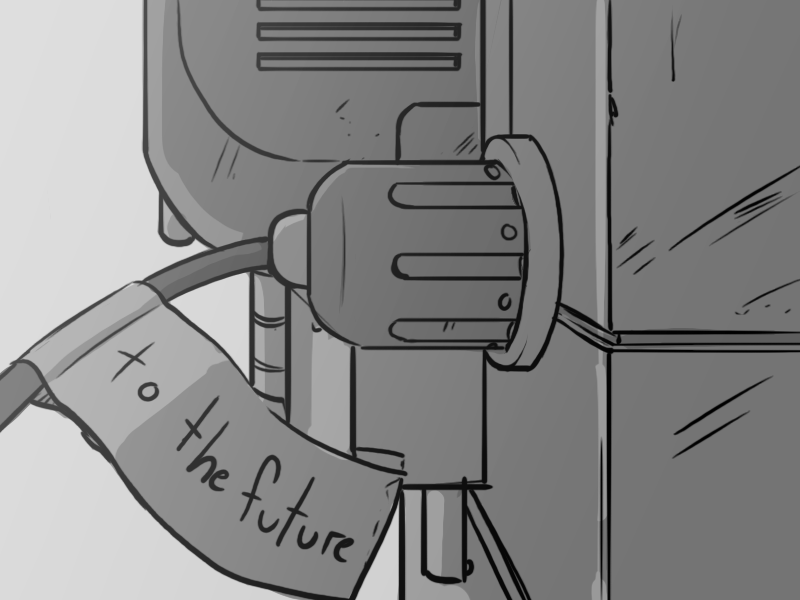 "That was a good idea too though!"

"Sorry! I'm going to be useless at this!"

"No, come on. Look, can you actually check that wire? There's a multi-meter in the toolbox. Just check that it's conducting properly and check the other connections to the main baffles and the paradox sink."

"That bomb looking thing beside it."