"I… oooh! You're talking about the roof tile."

"Yes! Someone made something with… I dunno, a picture of the botfly on it. Or it's name. Or something."

"That would get seen, but it sounds ridiculously inefficient though. Like Gregor grabbing people."

erroneousAllegation:
Were those actually roofing tiles?

They almost seemed to be molds for advertisements or something.

"I don't think it was an actual roofing tile. I think that was just what Josephine was told they were. The way she described them, they sound more like molds. There were tiles with Coca Cola logos on them, happy people eating noodles, that kind of thing. Maybe it was going to be used to print some kind of advertisements."

"I guess that would work. Not as well as a Youtube video, or a newspaper, but people would see it."

"So you think that was my first attempt? Convincing someone to print my name on some decorate plates or something?"

"Maybe not your first attempt, but the one before the thing with Josephine."

"Yeah there were, and… I don't know why it didn't pick those. Maybe… I dunno, maybe it can only use what's nearby, or who is nearby. Or maybe it's dumb and it doesn't know how newspapers work."

"You were just saying it's smart."

"Yeah, but it's not fully awake yet. It was even less awake back then."

"Maybe. Whatever the reason you made the 'roofing tile', it goes wrong. Maybe the person making it gets hurt, or gets fired, or decides that taking business instructions from glowing green bug monster wasn't the cunning strategy it appeared at first glance. For whatever reason, it goes bad. It doesn't work."

"Until Josephine's assistant finds the tile."

"Yeah, and gives it to Josephine. That brings you into contact with a new mind, an ambitious mind, a mind who is really sick of fixing sugar-making equipment and puttering about in her lab on weekends. A mind that wants to change the world."

"So I convince her that she can change the world if she brings me worshippers."

"Sssssort of. But if all this is true, why did Josephine's experiment fail?" 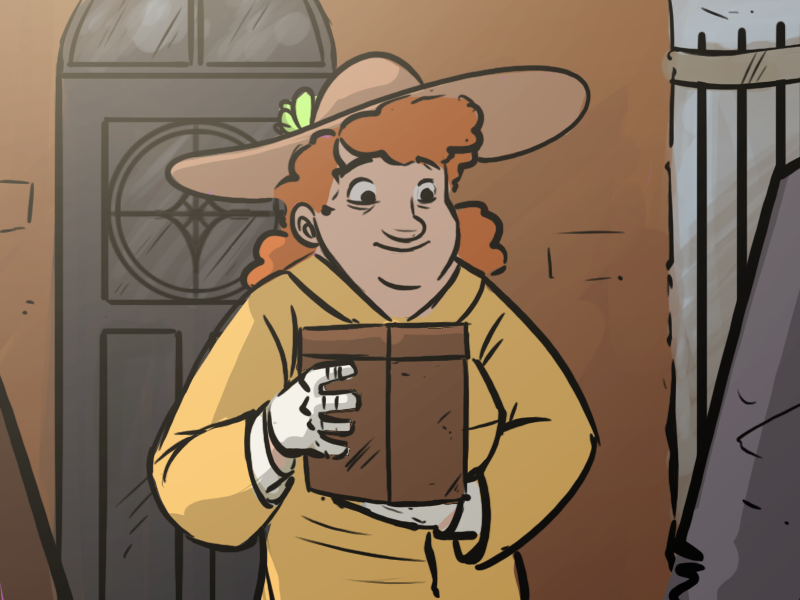 erroneousAllegation:
Probably, but I just realized something.

> If the Botfly only wants to be observed, then why would it kill people? Instead of killing a day and everyone around it, couldn't it have just allowed the experiment to be successful? That way it could be set up in power-plants world-wide, and it wins without actually having to kill anyone. On that same note, why would it do anything to harm the scientists who could have discovered it in the ruins and brought it to the attention of the world?

A symbiotic relationship which preserves its host would probably be its best option. What sort of God would deprive itself of its own worshippers?

"If I'm the Botfly and I want people to look at me, to worship me, why kill them? Why delete them from history? Why not just let the experiment succeed? If her experiment had worked, even if it was only working because the Botfly was willing it to happen and not because of some fundamental property of reality, the Botfly would have gotten as many worshippers as it could ever want. The whole world would run off it's power. It's image would be everywhere. In power-plants, yeah, but also in every physics textbook ever printed. So, why do it? Why blow them up?"

"I don't know! What do you think I've been out here all day trying to figure out?"

DiceRecalibrated:
Okay so.
The moment you started this thread, I went on a reading binge. +1 Reader 4 days ago.

Aaah! Thank you for doing all that reading!