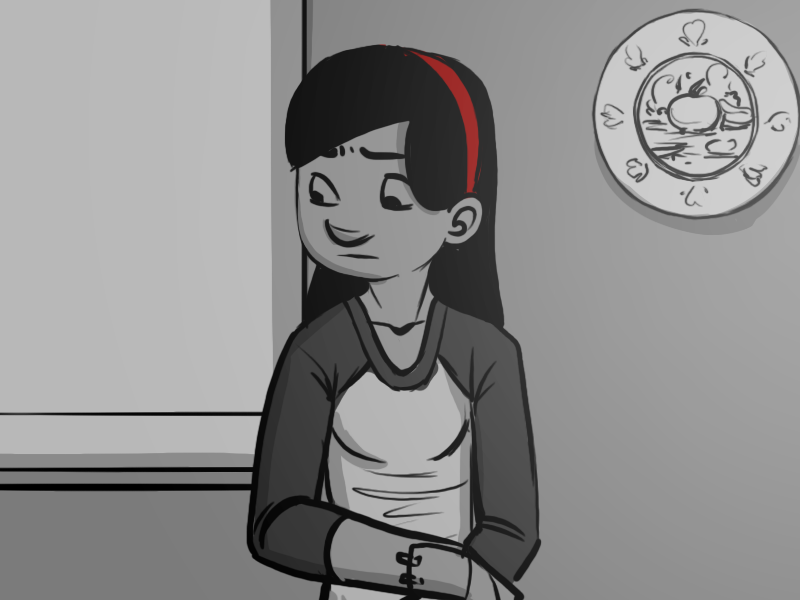 DS:
> admit that you have no idea what Kendra's doing.
> Yes, you know you made it. That doesn't help

tegerioreo:
"Because I don't know diddlysquat about those contraptions out there! After we worked so hard to get to the Moment, it looks like a dead end. Tell me something I can do that will help, and I'll do it - but right now I just feel sort of useless and in-the-way!"

Dave:
It's easier to pretend that this temporary break from mind-numbing terror and constantly nearly dying, isn't temporary. It's easier to pretend that you're safe, that you made it out alive, and that you can be happy for the rest of your naturally long lives. The fact of the matter is, Bina has utterly failed and probably died horribly twelve times before this, and there's nothing to suggest that her thirteenth time through will end any better. She's only made it this far with tons of help from her previous selves, and the only thing she's really accomplished so far is save Kendra from dying, except not really because she ended up in exactly the same hell that Bina is in. Have you ever failed catastrophically twelve times at something? It's understandable that Bina wants to give up and pretend everything's okay.

Beastnix:
>Kendra, you know all those Bina's worked on this stuff, but they had more time than this bina, probably in here and the only way you're going to solve this is if you understand Bina enough.

OK, maybe some of it is all those things, yeah, in part. But those aren't the real reasons she hasn't been reading the journals or why she's been avoiding the Viewers and other devices the other Bina's made.

They might have been what stopped her yesterday, but after what happened last nightâ¦

"Bina, you can talk to me. Really. Please just-"

"Just give me today. Please? If I haven't - figured it out by tomorrow, I'll start helping. I'll read the journals, I'll do anything you want. Just - I need a little time."

https://dl.dropboxusercontent.com/u/45027642/Adventures/All%20Nite%20Laundry/fanart/serpentineInterloper_2015_06_18.png"/>
To apologise for never making suggestions, I made a fan-art. Please keep up the good work you beautiful person!

Aaah! That is so cool! Thank you so much!

And you really don't have to feel bad for not commenting, but if you ever want too you would be more than welcome!

That we shall! Thread five. Jeepers.