There's this thing that Bina knows about called microtome. Lash explained them to her one day while they were avoiding homework together a few months ago.

They're used in laboratories and they're basically like super advanced versions of those big paper choppers you've probably seen at school. They have these impossibly sharp little blades and they take a sample, a piece of tissue, or an organ, and they cut it into thin little slices, and then mount those slices on slides.

They're not a new invention, but the modern ones, the ones that Lash wouldn't shut up about, can slice tissue so finely that you can see the anatomy of individual cells, just a few microns thick.

The Moment was like that at first. A microtome slide of the entire universe.

Or so Kendra tells her.

It's a lot smaller now.

Bina picks up the note. She's developing something of an aversion to notes.

Still, she should probably see what Kendra's up too. 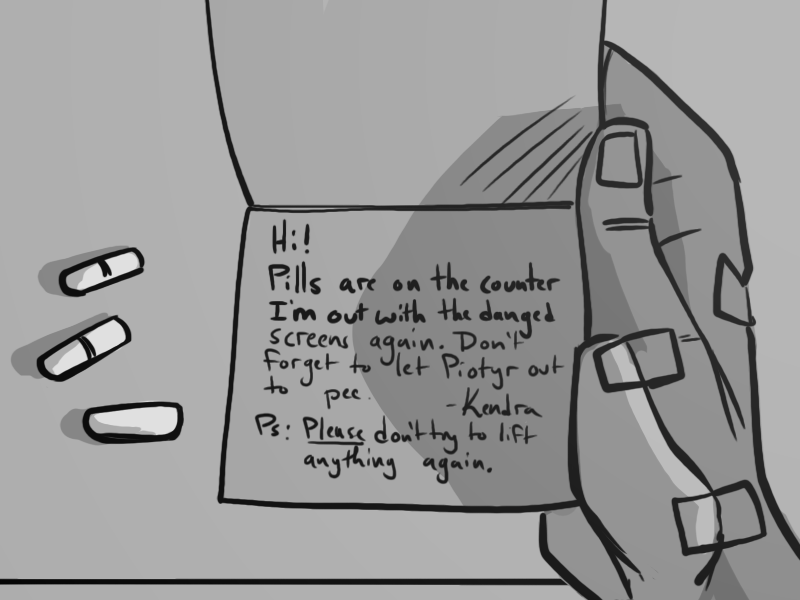 Not a surprise, she was outside all day yesterday trying to figure out why the Viewers aren't working.

Almonihah:
Well, if you need to eat and drink, one would assume that you can heal. Still, I'm guessing you're more doing research right now than just sitting around waiting to heal.

>What have the journals told you? It seems like the focus should be on the Botfly–it seems to be at the heart of this whole mess, and if you can't figure out how to… well, do something to make it stop making a mess, time might break or something. And that would be bad.

They probably do, but Bina hasn't been reading them.