"Come on, we should go. Maybe we can find something in the Moment to help?"

"You're just saying that."

"Yeah, I guess, but we should really go."

"All right, all right, fiiiiiwwaaaait!"

wolftamer9:
> Just resolve to save her later when you have the time and power.

"Yes! Did you see her? When you went back for map and junk."

"Who? Elizabeth? You mean her body? Uh… no, I don't remember seeing it. I was running from Horatio at the time though, with my light off, in the rain, so there could have been an elephant, the prime minister, and a high-school marching band there for all I would have seen it."

"But you'd have remembered it, right? If you saw it."

"Great! OK so, right. Time travel right? We don't have to save her now, right? We just have to agree, right now, that we'll save her later. Our later. Well, ok, I guess her later too, but MORE our later and -"

"We don't know if we'll ever be able to handle that much paradox. Bina, it might be impossible, and even if it worked, it would change our timelines. We'd have no idea where we'd even end up. We might be dead already, or prisoners, and we certainly wouldn't remember this conversation or-"

"No, you don't get it! We might have already saved her!"

"What are you talking about? We saw her die."

"We saw her fall - Bina, you don't survive a fall like that."

"Says the woman who just jumped like a million kilometres through time to hit a monster-dog with a hammer and is totally not dead.'

wolftamer9:
> Ridiculously convoluted means COULD be used to make major changes to the timeline without drastically altering Bina and Kendra's memories in particular (though you still might have to go back to your own time first). FIRST you need a fake body.

"Blood is easy to fake. They do it in movies ALL the time. Besides, it was dark, like you said." 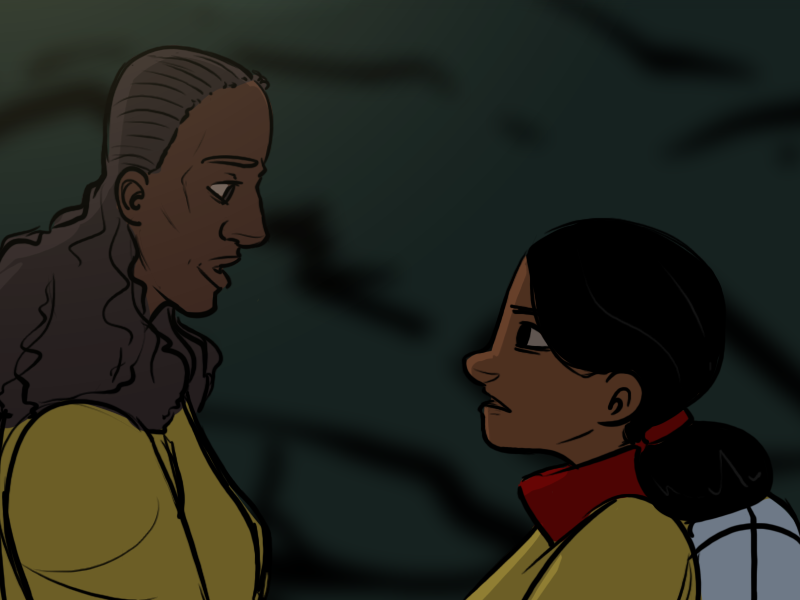 "But you still want to do it."

It's not a question.

"Shake on it. We're going to go back in time and save them."

"We didn't see the science guys die either."

"Bina! Three people? I don't know if we can save ourselves and-"