Bina thinks Kendra has already looked through this stuff, but there might be some useful things left. She thinks there's maybe a hammer or something under some of the -

All right, all right!

Bina puts her hands on the side of the tool rack.

Eurgh. Her hands. She hasn't been very nice to them recently, and she left the gloves on the -

She decides to try pushing first -

tegerioreo:
Go around to the other side and sort of lean against it. That's helping a little, right?

wolftamer9:
> Help Kendra and push the shelf in the best way you can, which I assume is leaning on it slightly while not losing your balance.

- if that doesn't work she'll just lean on it with her face. That'll help a little. Right?

The layers of chipped paint make it feel nobbley under the hands.

Kofiman:
You know, Bina, you seem to be suprisingly unaffected by all your wounds.

Are you still missing a tooth?

It is pretty weird. She feels pretty all right.

rachelcp:
>move around and attempt to push just to be reminded with excruciating agony of your major injuries to your arms and more recently ribs 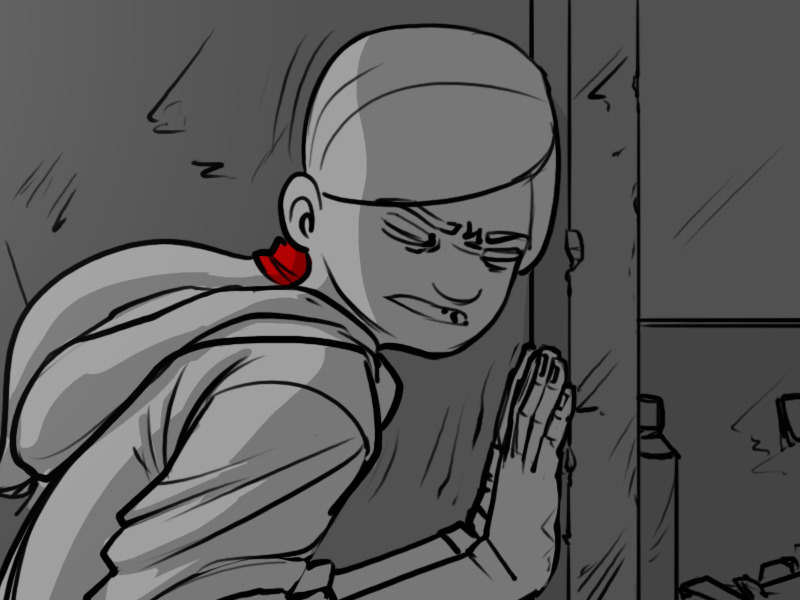 a52:
Jack, are you still doing that thing where you only take thirteen minutes per panel? If so, holy shit. These last few panels are really detailed, and I commend you for that, whether or not you're timing yourself.

Jeepers no! I never really did that. It was mostly a mental trick to get myself to push past my own obsessive perfectionism and actually start the damned thing.

The backgrounds in the updates you're talking about took about twenty five minutes. The characters took about fifteen or so.

I'll let you guys in on a little secret. That's pretty quick for this adventure. These backgrounds are, compared to the previous scene on the airship, really easy. Some of the panels in the dream sequence took almost two hours.

You know how artists always charge more for coloured pictures? This is why. Even simple colours increase the amount of time to do something enormously.