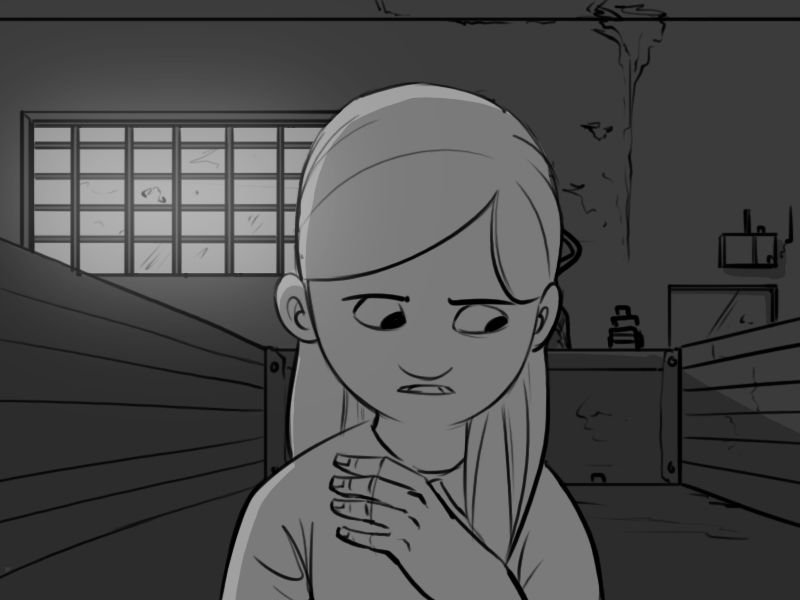 Wait, last time it was -

Somewhere off in the gloom, Bina hears a muffled splash.

wolftamer9:
I forget, didn't B12 have the red scarf on her, and wasn't she dressed like that? I think she's the one who's in that panel, at least. But that might mean B12 also figured out how to cross timelines! (Or she's been lying too.) Remember, she wrote that B3 seems to be able to do it? So she could have extrapolated B3's method on her own and gone to set things right by herself.

I was going to say it would explain how she knew what our Bina would need, but I remember that she expected for there to be dust, not mud.

Can't really wrap my head around how they got the wall to work though. Must be a question of how new timelines are created in the first place.

Another question is what was this other Bina doing there? In the retcon, she takes out some sort of black square (B13's Wallet?) and seems to either use it to absorb Bina's green energy stuff, or make it come out of her hand so it's consistent with the other timeline and Gregor seeing it. Then she pulls her through time??? And after that, she… Oh. She puts Bina in the exact same position as time-travelling Bina.

That probably means Bina should be VERY careful about time-travelling in the future if she doesn't want to become a multi-limbed corpse, like in that episode of Fringe. Hopefully the time machine technology accounts for some of that, but I'm still worried.

I try not to voice-of-god much for this adventure, as I'd much rather leave things up to the reader to figure out what's going on, but I need to point out two things here. If this becomes fanwisdom, some things in the future may not make sense.

First, the person in Bina's second dream who identified herself as B12 is wearing the same clothes as the person we see in the retcon.

Second, the blue journal that Bina recovered said the following:

"I think 5 found out something that she wasn't supposed too, and 3 scrambled her time-line by entering it on the fourteenth and killing Piotyr. This would have caused enough stress on the Loop to make the situation untenable, forcing the Botfly to shuffle the Loop immediately.

I know that this isn't supposed to be possible, and we're not supposed to be able to affect things beyond one loop in either direction, but it's the only thing that makes sense."

rachelcp:
+1 Reader
I started reading it about a week ago and have been reading it virtually nonstop and yay Im finally caught up

my friend told me that their friend recommended it to them and i wasnt planning on searching for it or anything but it sounded interesting. Then when i was casually exploring the forums I saw "All Night Laundry" and started reading it I'd probably have started whether or not it was recommended to me as its such a peculiar name for an adventure but nevertheless I am glad that I found this
I think its amazing the amount of effort and dedication you put into this work you complain about backgrounds being hard to draw but nevertheless you continue to add detail where alot of others would leave a blank wall, you kept notes to make sure the story doesnt end without answering most of the mysteries where so many authors end it on a bad note and despite the readers saying they wouldn't mind you taking a couple weeks off you have continued to update daily for almost two years. Jack you sir are incredible.

Aaah! Thank you! That is so nice of you to say! Thank you for reading. :)

wolftamer9:
Oh yeah, Jack, another reminder to finish the retcon and the part with Piotyr eating static when you get the time. Don't overwork yourself though, seriously!!!

Argh! Yeah, crap. I keep meaning to do that. Thanks for the reminder! Gad, I need to get the website up and running too, the retcons are so awkward to read on the forum.