Primary Temporal Position: 0615
Reset Temporal Position
I need to ask her about the experiment, about how she died, but she's mad at me. I can read it in her shoulders. She seems about to, I don't know, burst into tears or start shouting or something.

I'm not sure what she's so angry about, but I need her to keep talking.

But instead, she gets up from the table and walks a distance away. 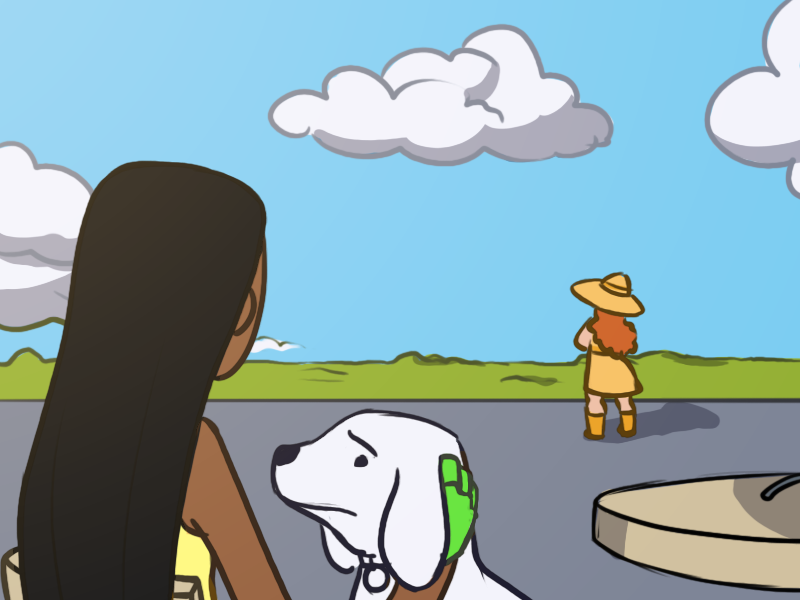 I need to know how she died.

The air has gone completely still. It reminds me of how the laundromat was when I first went inside, the air more like a liquid.

The dress I'm wearing sticks to my skin as I stand up. I have to let go of Piotyr to do it, but she doesn't run off again. She sticks right by my heel. I consider letting her lose, but then I reach down and pick her up. Nothing is going to happen to this dog.

I try to figure out how to get Josephine to talk again. I want to grab her and shake her, to tell her that no matter how smart she is, she fucked up because she forgot the most basic school-yard rule.

There is no such thing as a free lunch.

But I can't say that, because I'm good enough with people to know that insulting Josephine's intelligence is a good way to get her to never talk to me again.

So I approach it sideways.

"Forty watts. That's how much you said it was going to make. Back when we first met."

"Your experiment. You said 'it'll make 40 watts, if I'm lucky' or something like that."

"Oh? Did I? It's different every time you know, that conversation. Not a lot, but a little. Are you the one who ate my husbands tangerine?"

"You don't usually do that."

I can almost feel time slipping through my fingers. I press again. The landscape gives another sickening lurch, only for a second, but I see… things… in the sky.

elementaryMydear:
> Wait, but Josephine, the very first time we met (that is, not original me, but the me I am now, when we met for the first time from my perspective), back when you weren't dead, you said that you needed a huge crowd because the experiment made very little energy. With the huge crowd you got in the past you said you were going to make forty watts. Now you're saying that more than a handful of people generates so much energy that the equipment melts? Or was this big crowd you spoke of that time not the big crowd I thought it was?

Here's the quote:
This experiment? It makes maybe forty watts. That's if she's lucky. It turns on a lightbulb. That's it.

"You said it would only make 40 watts, and you needed a big crowd, but just now you said that you could power the whole country with like seventy people, and with ten people it melted to the -

"Oh that one wasn't properly grounded." She waves a hand as though dangerous experimental accidents are something that only boring people care about.

"The test with ten people, it was all the girls from packaging, I had them look at it over their lunch break. And before you ask, yes, I paid them for it. About forty five minutes in, the measuring device, which was very subtle and meant for radio frequencies, must have overheated and the whole thing caught fire."

OK, but I'm not really interested in that one.

"The other one though, the big one, you said you needed a huge crowd."

"Not huge, but yes, a crowd. I needed 47 people. I ended up with 48, so I didn't end up looking into the device myself. If I had, the bulb would probably have popped."

"But you said, if you had 70 people you could power all of Canada."

"Do you not know how exponents work dear?"

Oh good, this will be fun.

She pauses, clearly enjoying this.

"67 million light-bulbs. Over two and a half gigawatts."

I am getting sick again. Things might be a little slow for a few days.