I ask the question.

"So what little picture was on the special one? The one that charged? It was a fly, wasn't it?"

Josephine smiles, she's been waiting for this, I can tell.

"See that's the funny thing, we could never agree on what it looked like."

tegerioreo:
I think we need to know exactly what, if anything was on the plate that charged.

If it was a picture of a thing with tentacles, Bina, say thank you for the nice party and slowly back away.

"Well Leo, he was my other assistant, he said it just looked like scratches. Sorta random. Like someone had been playing with whatever machine made the tiles, and had ended up with that."

"My husband, of course," she waves a hand, "Said that it looked like a star. My husband was fond of stars."

"Maybe a tree? It was hard to decide." 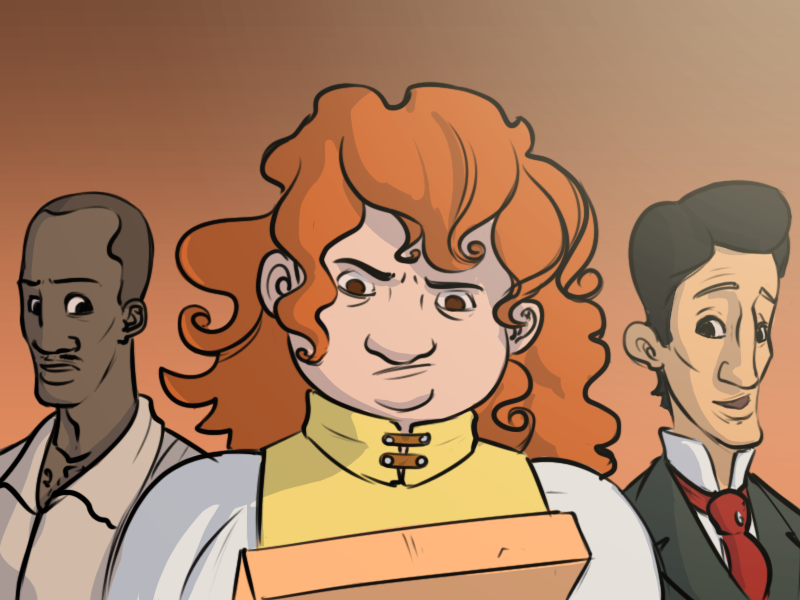 "It was a funny little thing."

tronn:
P.S. I do editing for fun:
"She was quite a bit smarter then her employer"

And you do it well! Fixed! (I need to get better at then and than…)

SNORKELBITCHMEGAHITLER:
i really fucking love this story. it should be made into a book

musicalEmpathist:
I SECOND THIS MOTION A HUNDRED-THOUSAND-FOLD.

wolftamer9:
I was just telling the creator of Superego I'd buy a book of the adventure, and the response was that the split-second animations wouldn't translate well. I'm assuming that's the case here too, but I'd buy it nonetheless.

Hmmm… I've never really considered compiling All Night Laundry into a book. A website? Yes, that's… actually partially completed, I just need to write an infinite scroll renderer (which is proving to be tricky, argh!), but a book?

I dunno. I don't use animations that much in this adventure, the one of the spark earlier this week was the first one in about a month, then before that it was in October. I think they add to the experience, but…

Beastnix:
Would be a short book.

See, this is the thing…. it wouldn't.

I counted last night, after I read this comment, because I honestly had no idea how long it was now. I knew it was long, I didn't know how long, like over 240 000 words long.

Now that's including endcaps like this, as well as tags and quotes, so it's probably about 10-15% less then that in terms of actual narrative… but still, that's four nanowrimo novels end to end.

Put on paper, that's (without images) about 850 pages. With images? Probably double that.

This is not Homestuck, but it's big. Like, longer then all of Scott Pilgrim big. Like, unfeasible to put on paper big.

This is why I'm always amazed and really thankful as well as kind of disturbed when people tell me that they've started reading from the beginning and have caught up.

My plan for this project, ideally before it wraps up, but definitely when it wraps, is to put it on a website somewhere where it's easier to read (and more likely to persist) then threads on this forum. I also plan on providing the archive in an easy-to-download format, some kind of html archive thingy.

But probably no book. Maybe t-shirts though, or prints.

In other news, today has been an interesting experiment in the world of 'Does anyone in my audience speak Korean?'

So far? Not so much.