Primary Temporal Position: 0553
Reset Temporal Position
tronn:
>You know, are you so certain that Horatio wants to harm you? The Hound didn't, at least once. Maybe it's desperate instead of angry?

Didn't want to harm her!?

In their first encounter, unPiotyr sent her back in time, into the presence of a WEIRD ALIEN TIME BUG which tried to EAT HER. It then poked a 4D hole in her arm when that didn't work. A hole that remains full of SPOOKY TIME LIGHT which causes spontaneous time travel and, given recent events, some form of the RESSURECTION OF THE DEAD.

Not the good kind.

The one with zombies in it.

So she's not, you know, KEEN on the idea of giving Horatio a little hug. The best thing, in her estimation, is if he's trying kill her. If that's not his plan, the options for what he's actually after get worse rapidly from there.

xooxu:
>I dunno if I'm seeing this right, but if you head to your left, there's a small Bina-sized gap between the wall and the tables that you should be able to slip by with ease while a certain big, clunky monster should just create a huge toppling mess. Just follow the wall until you feel it give way to some cabinets or something. Then just keep going straight and then you'll hit another wall that you can follow around a corner.

She ducks around the tables and runs, nearly tripping over a work stool in the dark. 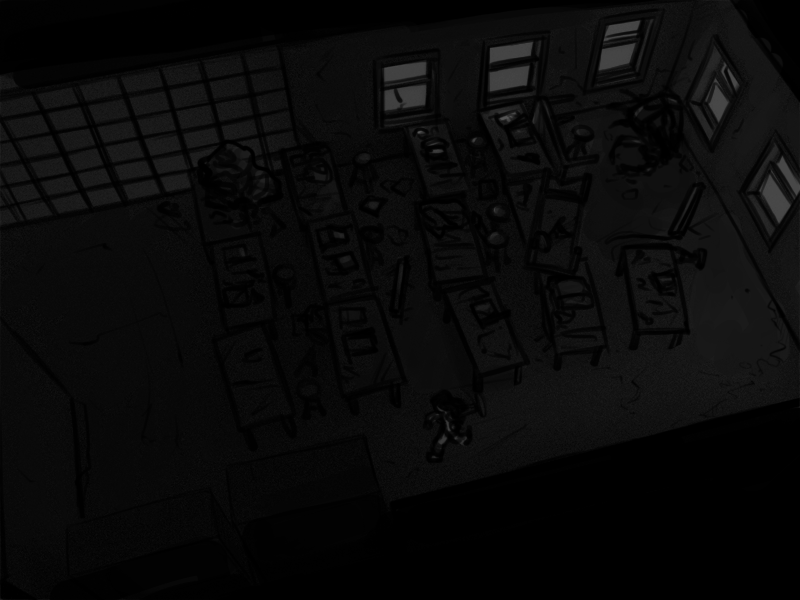 Being out of the mud feels so good. Eurgh. If she never has to climb back into that junk. If she can just trap him in here for a few minutes she can slip away. Get some distance. Breathe.

She thuds into the far wall. 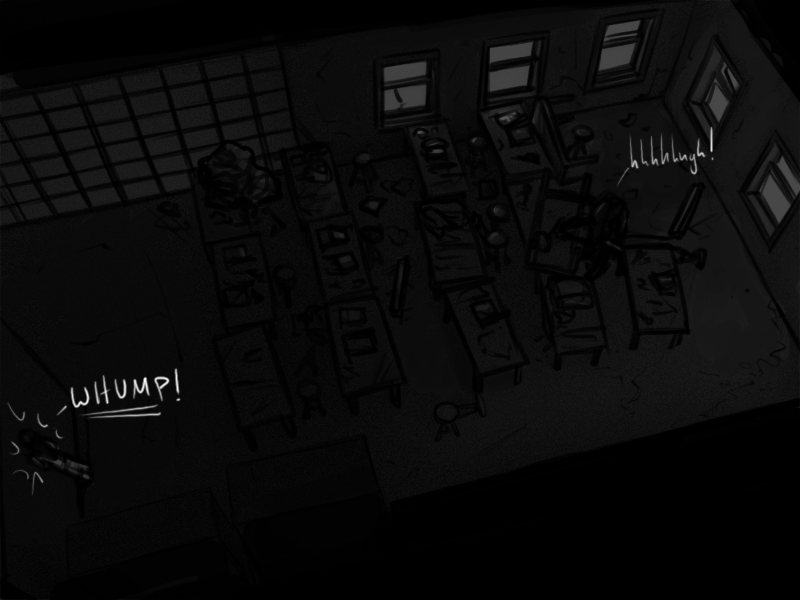 Risking a glance behind her she see's that Horatio is still trying to follow her, it is trying to slip between the tables to the open area but it's bulk is making this difficult.

xooxu:
What are those big tile things? They look a little like a wall of TVs, but that can't be right.

Not TV's, though that throws Bina for a loop as well for a second. They're tiny windows. If they were clean, and if there were enough light, she'd be able to see the rest of the building through there. It must be a single large room.

That means there's gotta be a staircase.

So my perspective on this room didn't really work out. I picked an angle that blocked off some important running room to try to give it a sort of ARPG style thing, but I didn't remove the fourth wall properly.

This lead almost everyone to read the room in a way I didn't intend (as though the tables were completely blocking the room).

Went back and fixed that. Hurrah for stealth edits! (he says, ruining the stealth).

A note for the future. When portraying scenarios where spatial relationships are important to decision making, do not obfuscate that space for aesthetic purposes.