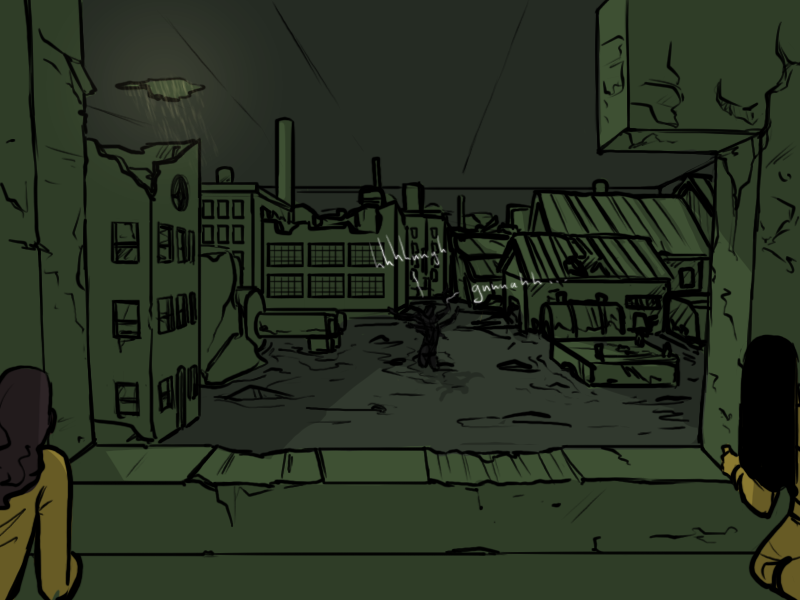 "It IS Horatio. I thought I recognized him."

tegerioreo:
Can they climb ladders? You can probably taunt them safely from up here.

"You think it can get up here?"

"I wouldn't want to bet he couldn't. He looks sorta goofy, but I saw him grow like four extra arms after I hit him with a pipe."

"He's not moving too fast. We can probably get down the ladder before he notices us."

Fuade:
Take the ladder up with you if possible

"Can't we pull the ladder up? I didn't look, is it the kind you can pull up?"

"You stay here! You have to make the time machine! You said you could do it with just some wire, right? There's gotta be wire in the trucks downstairs, and probably a power source. Like a… a whatsit, an alternator -

- You know what I mean! A bigger battery or something! And the other stuff, you could get it in the garage. Just wait 'till he follows me then go down and grab it. I'll circle around a few times and come back."

"Yeah, ok, that is AN option, OR we could just both run. Back to the camp."

"But we don't know what's happening at the camp, there could be more of them or Gregor could have -