"Man! You, this previous you I mean, is really mad."

"Yeah! Just ignore that bit! It's complicated and I don't want to get into it!"

"I know! What about the time machines?"

"Well, I mean, ok you're right there is a lot of different designs here. I think a lot of them aren't time machines par-say, like this 'temporal pylon' it's more of a -

"Yeah! I know, but - the time machines! They have some common elements, right? I mean, I saw they all have a power source. See?" 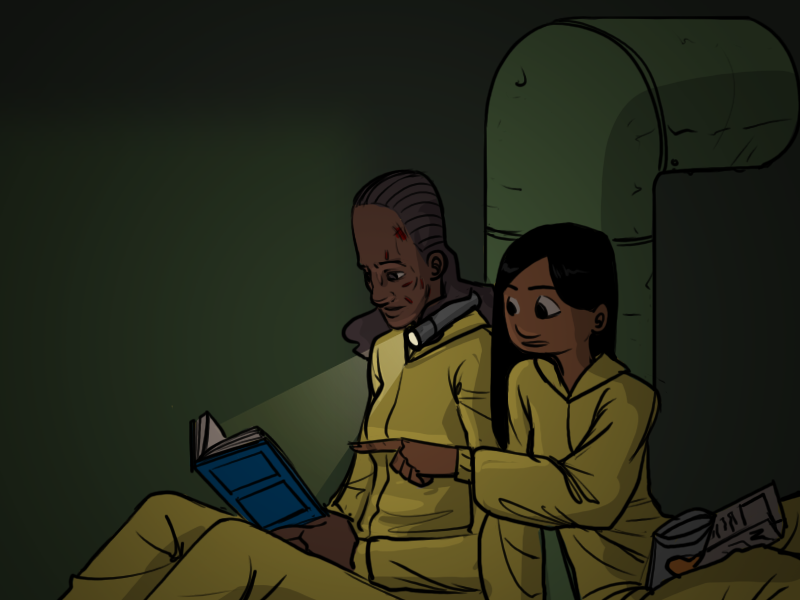 "Yeah, and something to act as some kind of tunable antenna for 'n-targeting' which I'm guessing means 'aiming at the right arrival time'. They all also have something to handle 'paradox' which apparently can be made to travel through wires like electricity, but they all handle that differently. Like, this one, 'coaxial model', it's portable, the drawing shows it housed in a tool-box?"

"Really? Fishing? You go - whatever. Not getting into that. It, apparently, 'grounds paradox' into a second piece of time? She says it's really stable, but you need pieces of time 'temporally equidistant from each other and from current N' which I'm guessing -

"Means you need a piece of the future as well. We don't have one of those. I saw that one. Are there any there that you think we can build with what we have?"

"Well, I'm sure I could find you a brick from somewhere…"

"I know I know! Sorry. I don't think so. Not even if we broke down all the flash-lights."

"We need more supplies. Maybe not a LOT more. If we could get a couple of radio's and some wires, we might be able to scratch up something. One of the simpler ones, maybe, but there's nothing here that we can make just from a few LED's and some batteries."

"Aaaaaaargh! Why can't something be simple for once!?"

"Good question. Where the heck are we going to find a bunch of radio's down here?"

xooxu:
I sometimes really wonder what on earth All Night Laundry would have been like if it really only had taken 3 months like Jack said previously. At times like these I'm just like, there's so much we don't knowwwwwwww…

Hah! Yeah, well, originally this was waaaaaaay less complicated. It was pretty much just a straight-up ghost story. I also planned some more traditional game-ey puzzle stuff, rather then the semi-naturalist narrative we've ended up with.

It has kind of run away on me in terms of complexity. If I ever do anything like this again, I'm going to keep a much stricter reign on things that expand the story because woah, it can happen fast.