Primary Temporal Position: 0534
Reset Temporal Position
wolftamer9:
I just want to say yeah, I'm convinced. B3's the Green Lady. The stopwatch practically proves it (though I guess it could still be Josephine). She's the target.

wolftamer9:
> Remember what you're dealing with, Bina. The Botfly is a parasite. She may not even be herself anymore.

That is not true.

"Like, anything that would help? I'm kind of drawing a blank on what to do next."

Nope. No. How would that even work?

It's impossible, right? She couldn't -

Bina tries to pull her thoughts together. 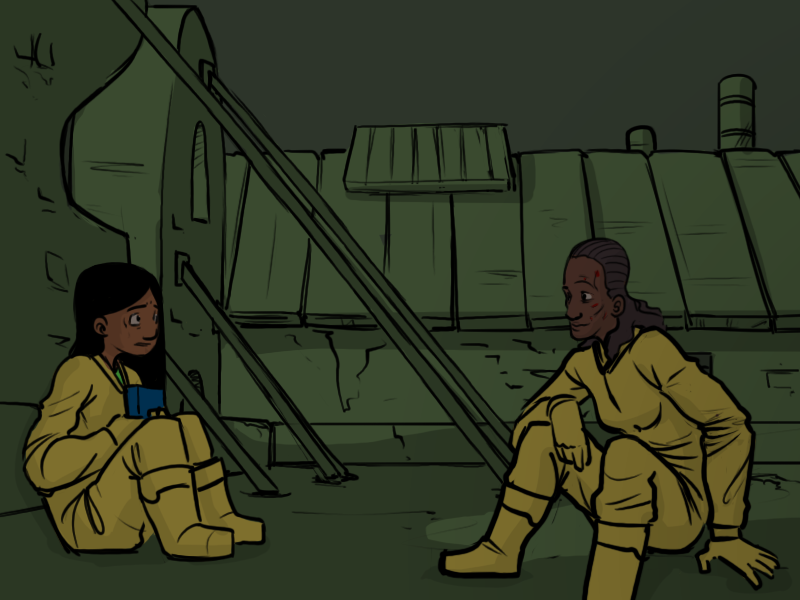 "Uh, I think the Moment is maybe also sort of a place? Like. The way she talks about it in here, it's somewhere where there's, like, space? There's a cafe at least, and you can spend a lot of time there. Like… lots of time. Maybe."

"So why call it the Moment then? That seems -

"No no, I think it's also a time too. Uh. Like it's a moment, in time, that just keeps going? Like a loop? I mean, like a tiny loop, of the same time, over and over again. That… that doesn't make any sense, but you get what I'm saying right?"

"Yeah, I get it, like the Factory. You said it was sort of dead, right? Frozen. The sun didn't move. Like the same second was getting recycled over and over again."

"You think that place is the Moment?"

She hadn't really thought about that.

"There's stuff there that could be useful. Tools. Like, for time travel. B12 calls them 'Devices'."

"Yeah but it's probably playing into Team Green's plans if we go there now. I know."

a52:
(why does Bina have to be so goddamn adorable when she makes faces like that)
Science!

CrimsonMage:
*snip*
Holy theorycraft batman! That was an interesting read.

wolftamer9:
(Just putting this here because I'll forget if I put it off 'til the end of my readthrough. Jack, you never added some of the missing images from Bina's third dream, with the not-dog and the static in the laundromat.)

Thanks! Yeah, I keep meaning to go back and do those. The second retcon isn't finished either. I don't know how I'm going to find the time to do those.