Bina resists the urge to hold the stick above her head and make Zelda noises.

BreadProduct:
> Can you see the opening from here? Is there any activity? The day shift should be showing up any time now right?

She can see the opening from where she is, but it's too far away to make out anything. 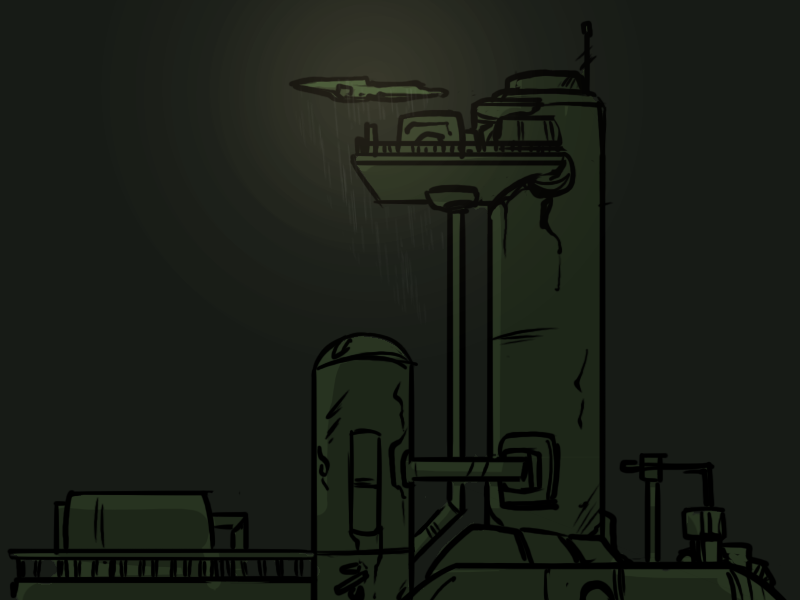 Wait, that platform thing on the tower is on her left now?

Urgh, she's way further out then she intended to go.

tronn:
>Bina: Look around, can you tell where are you? What was the meeting place you and Kendra agreed upon?

The garage where she's supposed to meet Kendra be on the other side of that.

She'd had a plan to lose them around the base of that tower, where there's tons of rubble, but she'd lost the wider perspective in the maze of broken buildings beyond. She'd known that she was getting further and further from the rendezvous and had tried to double back a few times, but each time one of the thingamagigs had emerged and blocked her retreat.

She ducked into the building with the horrible pipe in it because the wigglies had finally managed to corner her and her only options were ducking into one of the buildings, or trying to run through a group of them.

She'd already been running for about fifteen minutes, and she wasn't feeling up for trying to duck past them, so she'd headed inside. She's pretty sure that the towers ahead of her are the other side of the cooling towers she and Kendra had decided would be a good place to loose their unwelcome new friends.

obsidalicious:
Bina: Give the stick a few test swings, y'know… just in case a creature turns up.

The stick makes a low-key thwipping noise as she gives it a few swings before spinning it around and using it as a walking stick. It's not heavy enough to do any real damage, but it could be a useful distraction in a pinch.

a52:
Speaking of this, when was the last time she got some rest, besides that half-hour with Kendra undergound?

Urrrgh. Don't remind her! She's in the manic, giddy, slightly blurred state of complete exhaustion at this point. She knows that in about twenty minutes that exhaustion is going to stick to her like enormous lead anchors, but for the moment she's fine.

A bit twitchy, but fine…

HighwayWizard:
>How deep has the mud gotten since you were last schlepping around in it? If it's been raining this whole time the muck levels could be rising.

That is really hard to tell. The ground is uneven. There are platforms and dips, and patches of rubble. If she had to guess, she'd say it was higher too, but there's no easy way to tell. The mud where she is now is up just past her knees, which is going to make running a non-starter.