The numbers on the flags that they are close enough to see, decrease in value the further on they go.

"I'm really hoping that all of these aren't bodies," says Kendra in a too-cheerful tone, "'Cause that would be a really a LOT of dead people."

Lacemaker:
Plastic has existed for a long time, but mass-produced plastics like we know today didn't really exist until after WWI. (or the Great War, if you lived before WWII. Thank you great-grandpa, we'll never forget.)

Considering the sheer number of the plastic flags, I doubt they mark bodies. That many bodies, all in one place? The building would be swarming with people, and everything would be marked with a lot more than a little blue flag. If I had to guess, I'd say they mark something someone is looking for. There must be some sort of substance, radiation, an odd chemical, heck, maybe even a rudimentary sign of the time cracks, and the flags mark where the readings are strongest. Maybe the numbers are chronological, or maybe they relate to the readings of this odd substance. Either way, someone will eventually come back to study the areas marked by the flags.

If you were really curious about it, Bina, you could try to carefully shine your light again for a little bit, and see if the flags correspond with the cracks. 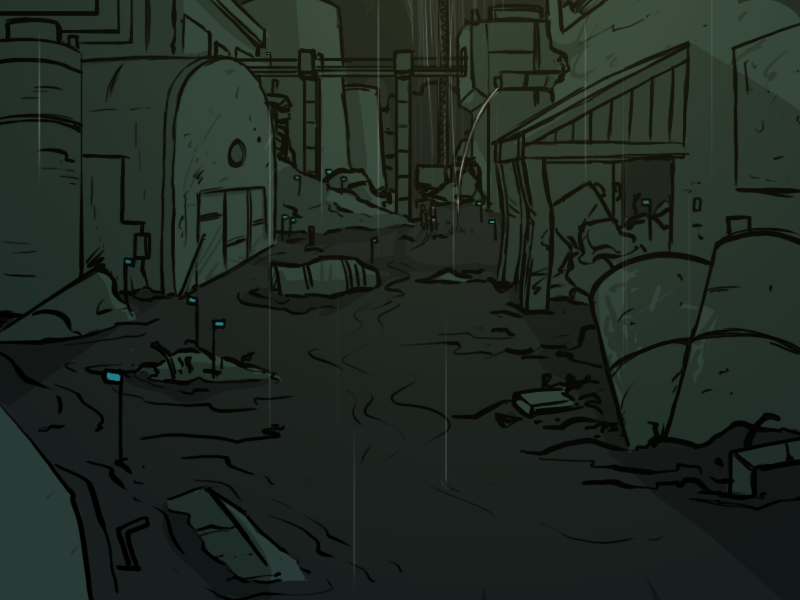 "Is there a way to test for time shenanigans, do you think?"

"You mean aside from my spoooky arm woo woo?"

"Yeah, aside from that."

"I dunno. Maybe." Bina rubs at her wrist through the bandages, "I really don't
want to use the light anymore. It has a tendency of going disastrously poorly, and also I'd really like to not get dissected by evil government scientist people so they can figure out what it is."

"Uh, thinking of evil government science people, do you think we should like… just walk in there and ask if we can use their crane? Or should we…" Kendra waves a hand back and forth, "I dunno… sneak?"

xooxu:
Oop, not how I meant that! Just thought it was funny. Sorry if it came off like a criticism!

Don't worry about it! It was just my own frustration at being slower then I'd like.

I have an idea on that front, but we'll have to see how it goes.

The:
Err, shouldn't either that be 5-72? Either that or the image is wrong.

Aha! It should. Thank you for catching that That One Guy!