"I know, I saw" says Kendra, "You almost bumped into me."

Kíeros:
> Tell her you jumped through time. Again.

"No! I mean through time, again. Like, I touched one of the cracks, it went pop and woosh! Back in time."

"Really? Oh crap! You're not going to have another seizure are you?"

"No! I mean, like, I'm glad you're fine, but why not? None of this time stuff makes any sense. What happened?"

ArcusofBrambles:
NOW is it time to go and get out of this cold?
meganopteryx:
>Skedaddle

"That's where we're headed, right? With the floodlights?" 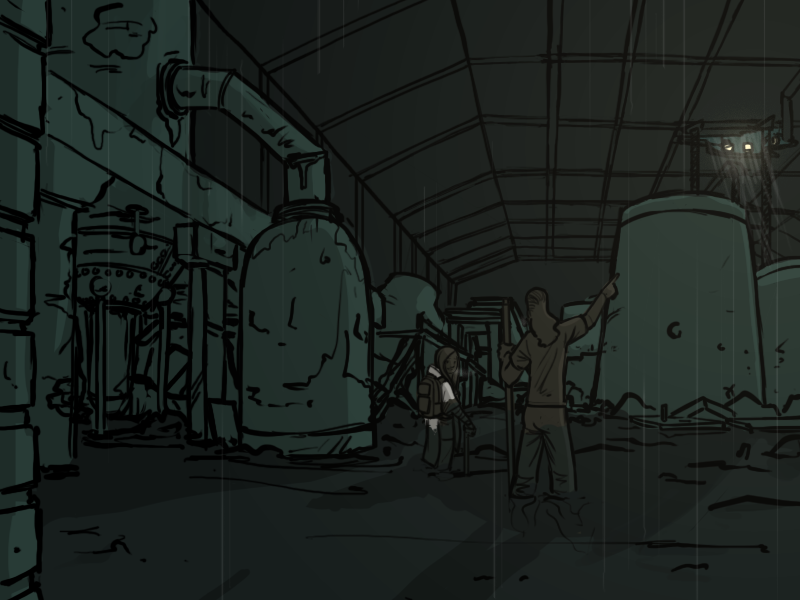 "Yeah, there's a crane there. I don't remember the floodlights though. From before. Maybe they were off?"

"Someone must have turned them on then! That means there's gotta be someone over there!"

"Lets hope its not Gregor."

"Come on Bina! Don't be so pessimistic. I bet its the construction workers! They start pretty early in the morning, right?"

"Well, there was a bunch of weird stuff near the hole. Gasmasks. Bodybags. Construction guys don't generally need that stuff."

"Hey, I don't really care who they are, I'll take anyone who isn't an angry shovel-wielding Russian, a giant unkillable dog, or alien time bug. Heck, I'd take one of those if they offered me a shower."

Xindaris:
>Just mutter that you accidentally went backwards for a second and check for the phone from the dream

Sorry, I know you've suggested this a few times now, but Bina didn't get to keep Lash's phone. She lost it, along with her bag and dress, by the time she'd turned the corner in the dream laundromat.

This will be clearer when I finally get around to finishing those panels (and the retcon from six months ago… sigh). I plan on doing those when I take my vacation in a few weeks.

Argh. Now I have two backlogs to finish.