Aaah! Aaah! Yes. She's back. She'd been worried she'd end up in some OTHER horrible place, rather than the horrible place she had been.

She drops the cane into the mud with a plot and clutches at her hand, choking back the light. The glittering maze of shattered time shuts off. That sudden disappearance seems sinister to Bina, like something venomous slipping under a piece of furniture. Out of sight, but still dangerous.

Nothing good ever happens when she uses the un-light. EVER.

They had seen her! She had talked to them. Had she just screwed up history again? She's like a child blundering around breaking everything.

It's at this point she realizes that she can't see Kendra. 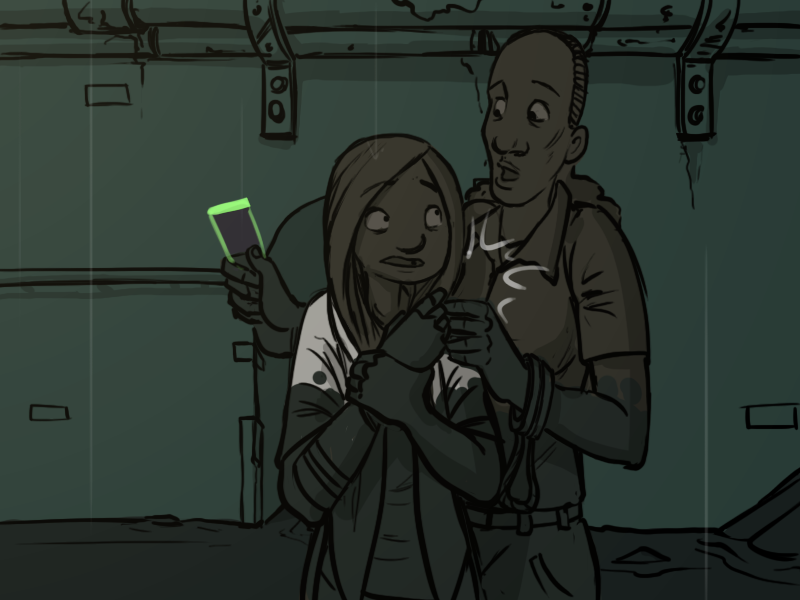 Kendra grabs her and she realizes that she really was starting to panic. Relief drains all the energy out of her and she has to resist the urge to bury her face in her friends shoulder.

"It's all right. I got your ugly splinter, it was in the mud over there, leaning against the TV. Are you ok? You're shaking."

Damn, she thought she was keeping it together better then this.

xooxu:
Your backgrounds are always super detailed. Do you think something like this program (tutorial that explains it) might make it easier on you? I don't have a computer large enough to run a program that big, but I've been wanting to try it out. Maybe you'll be able to use it?

Thanks for the suggestion. All Night Laundry was originally supposed to be in 3d!

Didn't work out very well though. 3D, generally speaking, needs a whole lot more work up-front in the modelling and texturing department. It pays huge dividends when you start moving the camera around, but it takes a lot of time and energy to get to the point where you can do that. Unfortunately, I'm not really good at doing up-front work. I can do continuous work (like this adventure) pretty well, once I get in the habit, but doing up-front work like that is very difficult for me. I haven't found the trick for it yet.

It's something I still have in the back of my mind as something to try in the future, but it wouldn't really work for All Night Laundry. Due to my breakneck update pace, I don't have the time to invest in creating the assets, and I'm far too picky to use generic or procedural assets like they suggest in the tutorial you linked.

I'd love to see more Adventures done using 3d though. I think that'd be really cool, and there's still the off chance that I'll be able to make it work at some point in the future.