Primary Temporal Position: 0321
Reset Temporal Position
xooxu:
> Whatever happened/is about to happen with Sam, I'd say you really shouldn't feel too bad about it. She seems like an unhealthy friend who needs to work on her own issues. It's always sad when friendships don't work out the way you thought, but I think it's better in the long run.

Yeah, I know. Still. It sucked.

It happened about four hours from now, I was staring up at the ceiling at two in the morning, still feeling embarrassed, still seeing Lash looking at me with pity because I was the little girl who had freaked out about a ghost story and gotten caught by the police.

I couldn't sleep, I kept trying to figure out why Sam had told that story, and I realized that Sam hung out with me, mainly, because she thought that I made her look good.

She had gotten mad because I was better then her at getting out of fake handcuffs, and so she had told an embarrassing story about me to knock me down a peg in front of Lash.

And that was pretty much it, as far as our friendship went.

wolftamer9:
> Normally I would say "Aww, that's sad," but there's kind of a giant dog-skeleton-monster to worry about right now, so maybe you should just leave, and let Sam inevitably follow.

It does sort of put things in perspective doesn't it?

"There's nothing out there," she says again, "There's no such thing as monsters." 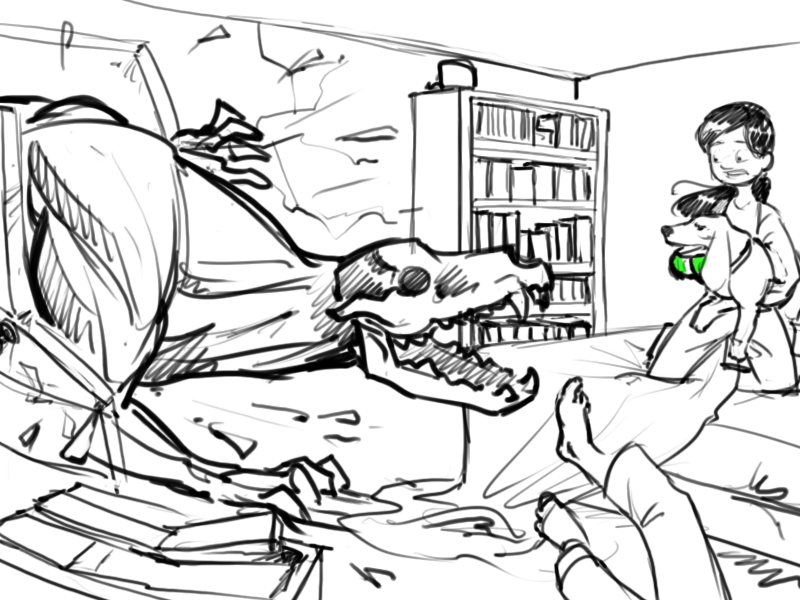 Turns out that air-filled doors and particle board furniture are insufficient to stop an animal the size of a minivan.