But… considering she fell from, you know, the SKY, Bina thinks she got off pretty light.

Everything is scary and weird right now, and she has no idea where she is.

So she does the only thing that makes sense.

She pets the beagle.

Crowstone:
kiss the beagles hhedad
Kyky25:
>Give beagle a pat. He's so cute. And I say that as a cat person.

It is pretty adorable and it has a warm, fuzzy, animal smell.

The beagle seems to enjoy the attention.

Kíeros:
> Does the beagle have any identifications?

It's wearing a worn nylon collar.

After some coaxing, Bina is able to get the beagle to let her see the badge. It reads 'Piotr', but has no address or further identification.

Bina thinks the badge is homemade.

Bina doesn't really want to let go of the beagle right now. She could use some not-being-scared right now and the beagle, who she guesses is named 'Piotr', is helping with the not-scary in a doggy sort of way.

She looks around anyways.

Not stores. They look sort of industrial.

She's in a parking lot?

There are no cars, and no parking spaces. A courtyard then, or a loading area.

It is around mid-morning. The air is cool, but not cold, a spring day. The sky is a very high, and pale, and blue.

It is the kind of morning where Bina might want to go for a bike ride, not because she had anywhere in particular to go, but just to feel the air move over her skin.

tegerioreo:
Look to the right and satisfy everybody's curiosity about the (perfectly ordinary) blurry object back there.
Dregadude:
>What's that blurry thing to your right? 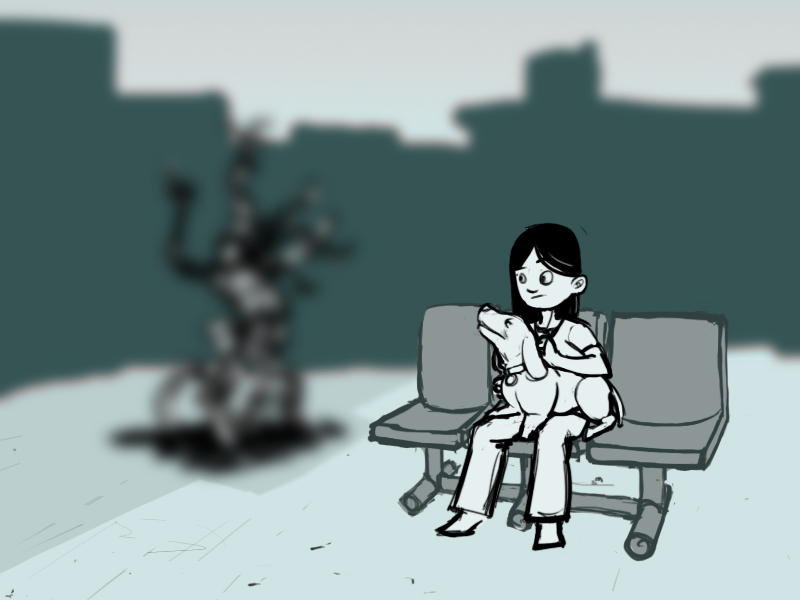