Kíeros:
> Whatever you do, don't create paradoxes.

She's not planning on it!

She happens to like her brains. A lot! She uses them for a many things, such as being alive.

No, she just covered it back up just before she landed. It was doing weird things to the piece of time she's holding. Making it vibrate and little bits fall off the edges. From the way it was acting, she's pretty sure that whatever the green light is, it's -bad- for these pieces of solidified time.

And whatever the bad stuff is, it's not just the light either. Her whole body appears to be radiating some kind of invisible wave or force. The splinter of time starts to shake if she tries to hold it in her right hand, even with the bandages wound tight.

And then there was the computer screen. And the TV. Something is really wrong with her.

Held in her left hand, the shard is almost still, but there is still a low pulsing vibration.

Not like a cat purring, more like touching the side of some big machine. A big machine where something, deep inside, has gone wrong.

And through it she sees the tunnel. It's pretty weird.

LostDeep:
You didn't go into any of the places Gregor told you not to. There are two doors, right? One where Gregor came from, go in the other one.

Hmm. There are three doors to the Laundromat. 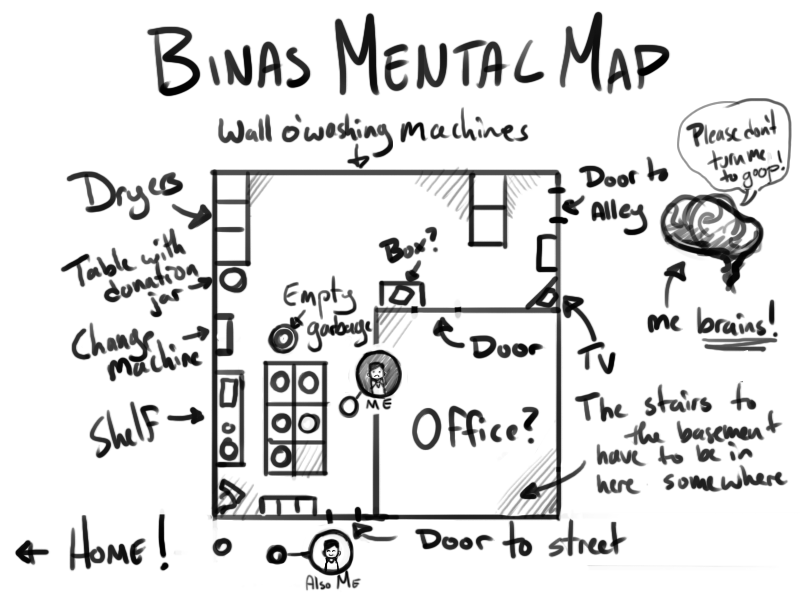 Where would Kendra go if she WERE here? Would she run?

From deeper inside the laundromat she hears a noise. It's sounds a lot like the sound of someone trying to be quiet.

What happened to the shard?

Up 'till now, I was doing something weird with the shard, where we could see it through Bina. That was cool, and plenty weird looking, but due to how similar the colours of the backgrounds are, it never quite looked right.

This is better, but I'm still not entirely happy with it.