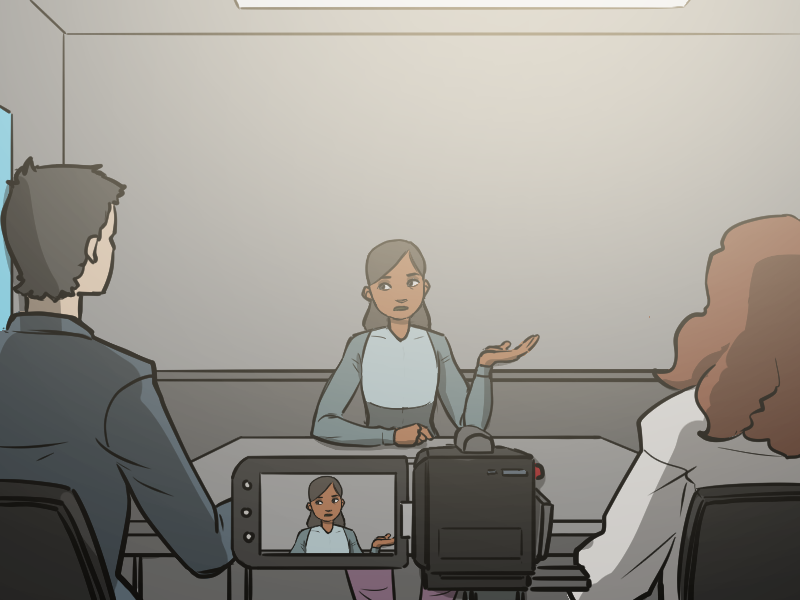 The one who calls herself Noon nods and switches off the recorder. At least, the recorder that Bina can see. "Thank you for coming in and making a statement Ms. Miryala. We know you're still recovering from poor health, so we're very grateful you made the time."

Bina doesn't smile. "If it gets you lot to stop phoning me all the time, it was worth it."

"Will you keep to the cover story?" asks the other one. 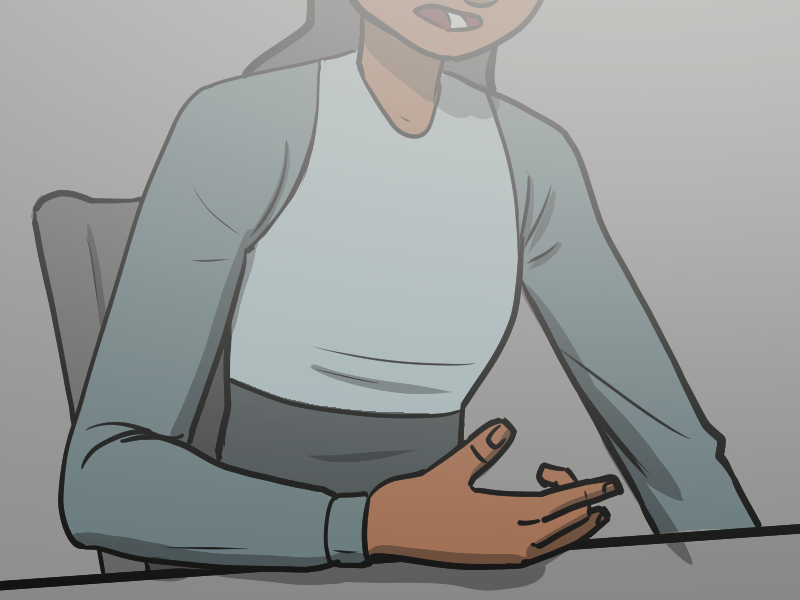 "In cases like this," says Agent Noon. "The cover story doesn't have to be clever, just credible."

The other agent looks around the room. "Your dog didn't show up. I was kind of hoping to meet her."

"I don't think she likes this place," says Bina.

"And you?" asks Noon. "Will you consider our offer?"

Bina is feeling tired again, and going over the story has left her feeling irritated at these people with their suits and their surface-level politeness.

"Sure," she says. "If you tell me the truth about why you had me come in."

Both of their faces go carefully blank.

"This wasn't about my story," Bina continues. "You got most of that already, from Kendra, and the bits you didn't, you got from Amie and Emmie."

She leans forward, and both of them shift very subtly away from her. "This is about trying to figure out if I'm the Botfly." 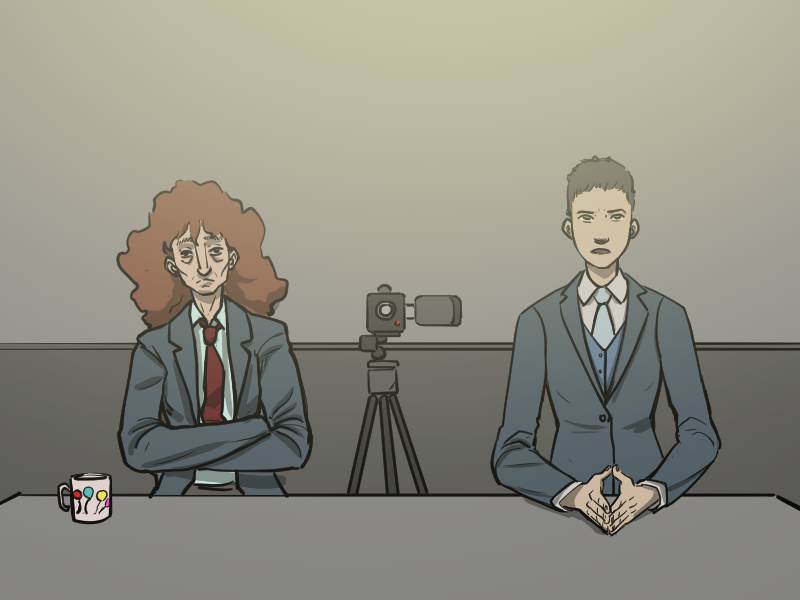 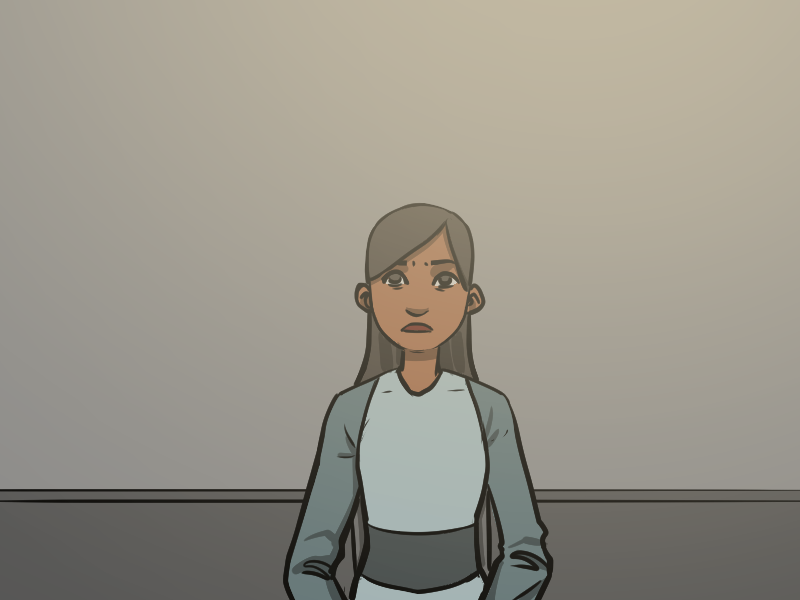 "Well," says the other agent who's name Bina thinks was 'Halloway'. 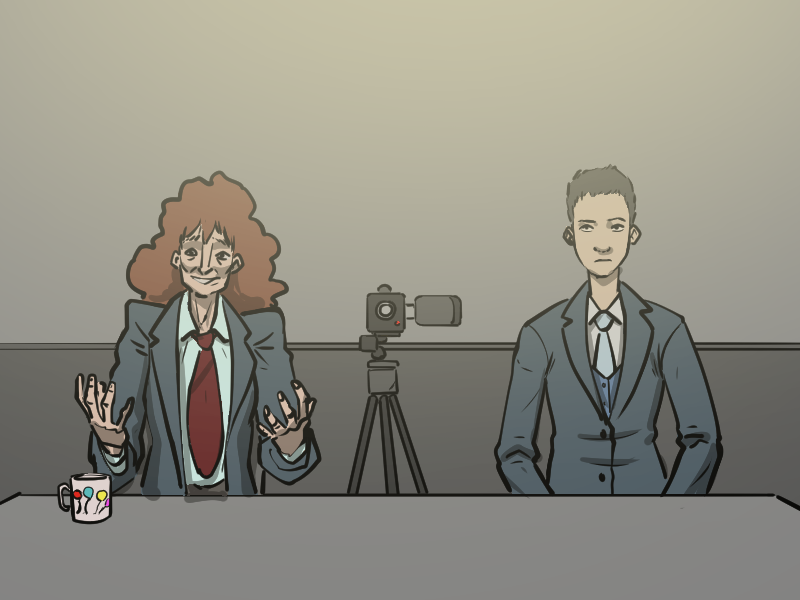 "Glad we cleared that up then."

"Thank you for your time," says Noon.

"I'll walk her out," says a voice from down the hallway when Bina walks out of the definitely-not-an-interrogation room. "If that's all right with you." 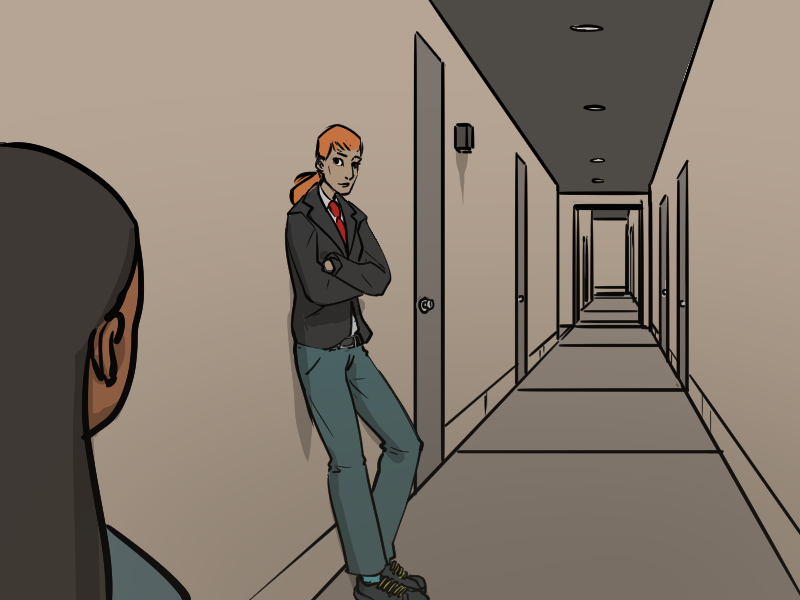 "Fine with us," says the one who's probably named Halloway.

"Seeya," says Bina. They hadn't been unpleasant exactly, but there was more than a bit of the sensation of being a microbe on a slide trying to peer back up a microscope.

Elizabeth pushes away from the wall and gestures down one of the nondescript beige hallways, which apparently compose 100% of the phenomenology spooks Quebec city offices.

"The exit's this way," says Elizabeth, leading Bina down another nearly identical hallway.

"They friends of yours?" asks Bina, gesturing with her head back the way they came.

"Noon and Halloway?" asks Elizabeth, glancing over her shoulder. "Not really. Never met them until a few weeks ago."

"They stopped lying to you then, I suppose," says Bina.

"Yeah," says Elizabeth. "They even bumped me up a pay-grade. I'm officially a special agent now. Thanks for that. I guess." 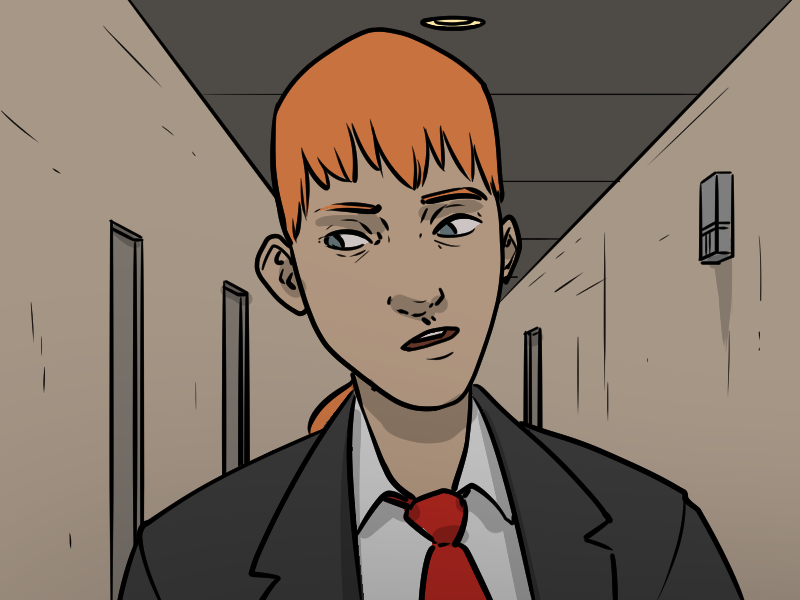 She doesn't sound particularly happy about the situation.

They very few people in the hallways. The whole place is very bland, very beige, and very boring.

Boring in a way that Bina finds intentional.

Her cane, which she'd brought because both Lash and Kendra had threatened her with bodily harm if she didn't, clicks against ancient linoleum tiles.

"I don't get why they didn't tell you that this stuff is real in the first place," says Bina, mostly as something to say. Elizabeth isn't someone who does chit-chat.

"It's mostly not," says Elizabeth. "And the stuff that is… well they're dangerous to have too many know about."

"You know what they call the place that I used to work? The front office?"

"Kept in the dark and fed bullshit," says Elizabeth.

Bina can't help but laugh at that one, and after a few seconds, Elizabeth joins in. 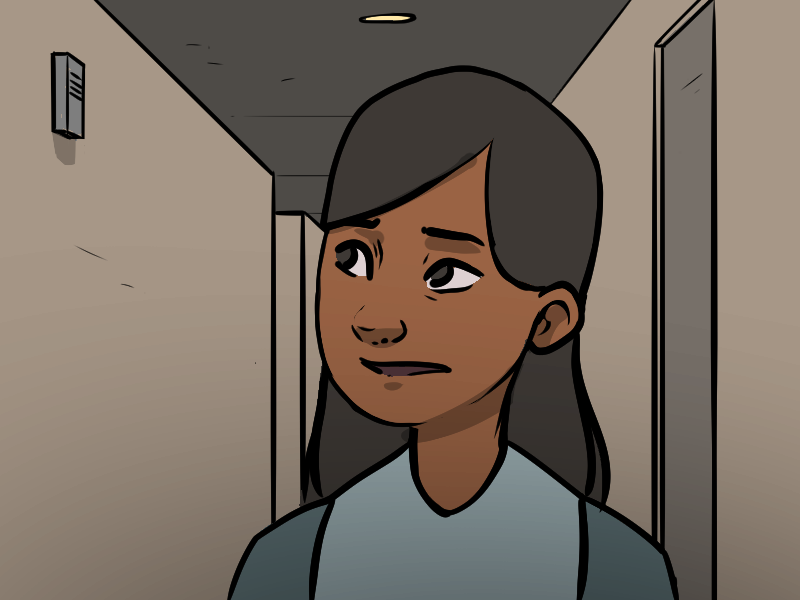 Elizabeth's face twitches, "Of course I am. Keeping me in the dark got me killed, by my count, about five times - and shot, and then it gave me brain damage."

Bina winces at that last bit. "How are you doing? You don't have any lingering symptoms?"

"Me?" asks Elizabeth. "No, I mean - I had what? A few days of duplicate memories? I had a nasty seizure, some lingering left/right aphasia - but that's mostly cleared up. They even gave me my gun back."

They pass from the hallways into a large, bright, box of an atrium. The floor and walls are bare of ornamentation. The only color in the whole room is a small potted plant on the desk of the elderly security guard who Bina suspects might be asleep.

"How about you?" asks Elizabeth, her eyes tracking down to the damned cane that Bina definitely doesn't need, and definitely isn't leaning on rather heavily after a long day. "I hear you're on the mend."

"It's getting better," says Bina. "I still have the tremors sometimes, and holy crap you lose a lot of muscle mass when you're in a coma - but yeah. I'm getting better. I'll be fine."

She says that to herself a lot these days, usually just after physical therapy when somehow every single muscle in her body hurts. At least she's pretty much figured out walking again. Pretty much.

The door makes an unpleasant buzzing noise when Elizabeth swipes her keycard.

Waiting outside is a small white dog. 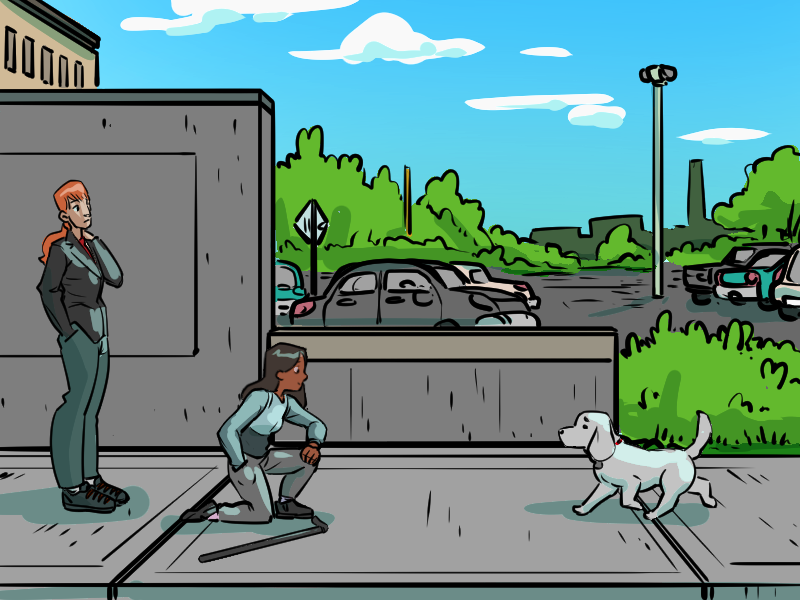 "I'm OK!" says Bina, as the little dog hurries over to her, making a chuffing sneezing noise. "They just wanted to talk."

She bends down to pat the tubby little dog on the side. "Are you worried about me, or do you just want bacon?"

Elizabeth watches this with a complicated expression on her face. "So she… really does just show up?" asks Elizabeth.

"When she wants to," says Bina, rubbing the dogs ears, which make a soft flapping noise. "Or when she wants bacon." 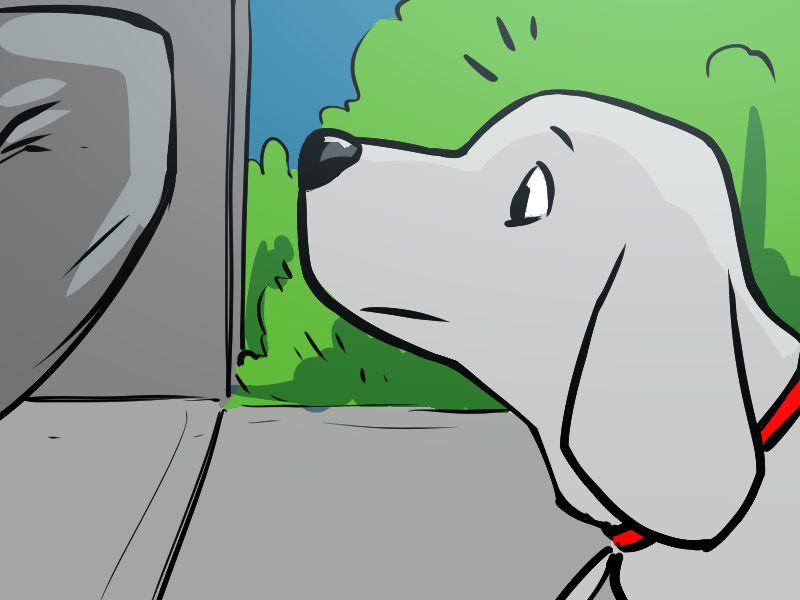 Bina laughs. "Yes! I know, I said the word bacon! Here…" She gives the little dog some of the little treats from her back pocket. Piotyr makes little snuffing noises as she hoovers them up from the sidewalk.

"Where does she go…" asks Elizabeth. "When she's not here?"

"I dunno," says Bina, ruffling Piotyr's ears. "I've asked her, but she's still pretending not to understand people most of the time."

Piotyr devours the bacon and then licks Bina's hand, hoping that maybe there might be more bacon there somewhere.

Elizabeth pauses, looks out over the car-park, and squints. "Is that Kendra?"

Bina stands up and waves to the tiny form of Kendra standing by her car across the parking lot. "Yeah, she said she'd come pick me up."

Elizabeth nods, and then looks at Bina looking half embarrassed at what she's about to ask. "They offered you a job, right?"

"Yeah," says Bina. They had. "They want me to go to school first though."

Bina sighs. "I haven't decided yet. I think… Do you think they just want to keep an eye on me? Make sure I'm not going to sprout tentacles or whatever."

Elizabeth thinks about that for a few seconds as they walk across the car-park, with it's random scattering of down-market sedans in brown, beige, and maroon. "Maybe?" she says eventually. "Probably. If I'm being honest - but also, you saved the world Bina. There aren't a lot of people who can say that and have it be even half-way true."

Bina just hunches her shoulders at that. "Tell them, if I do come to work for them, I won't build them time machines."

That surprises Elizabeth, enough to make her stop and look at Bina. "You can still do that?"

Elizabeth nods, and they walk the rest of the way in silence.

"Hey Elizabeth," says Kendra, as they reach the car.

"You ready to go?" asks Kendra, looking down at Bina.

Kendra already has the door open for her, and Bina is feeling wobbly enough on her legs at this point that she hardly feels bad about that. Piotyr ducks past her and jumps into the back seat. Despite being able to show up wherever she pleases, she never misses the opportunity to go for a drive.

"Oh hey!" says Elizabeth, as Bina is about to get in. "You don't happen to know anything about these rumors of a huge purple creature living in Laval, do you?" 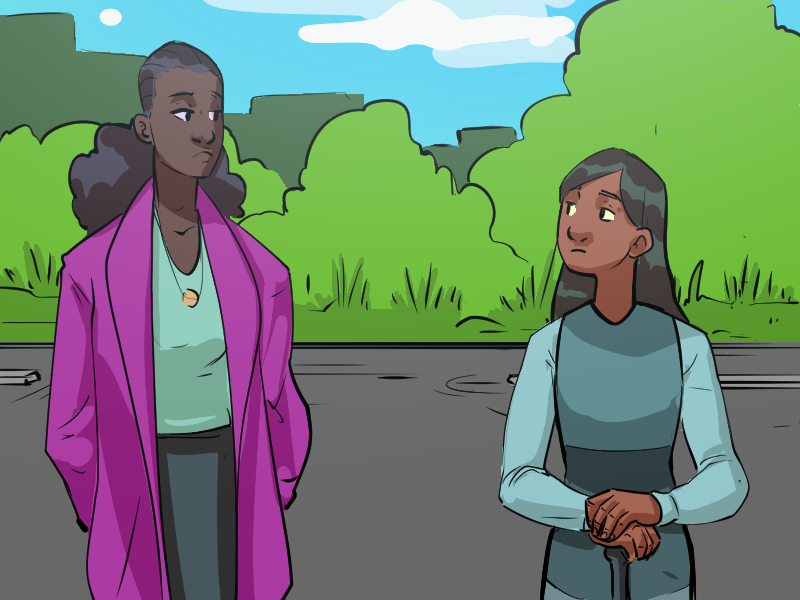 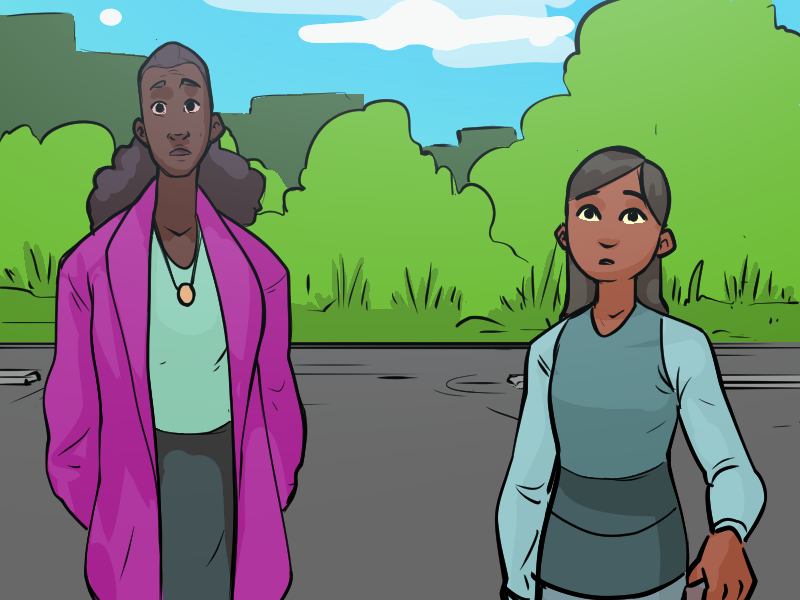 Special thanks to everyone on discord for helping me with the names for Noon and Halloway. They didn't end up in a video-game, but I thought I could use them here for this.

A reminder, there will be a two-week gap between updates for the next scene, and the one after.