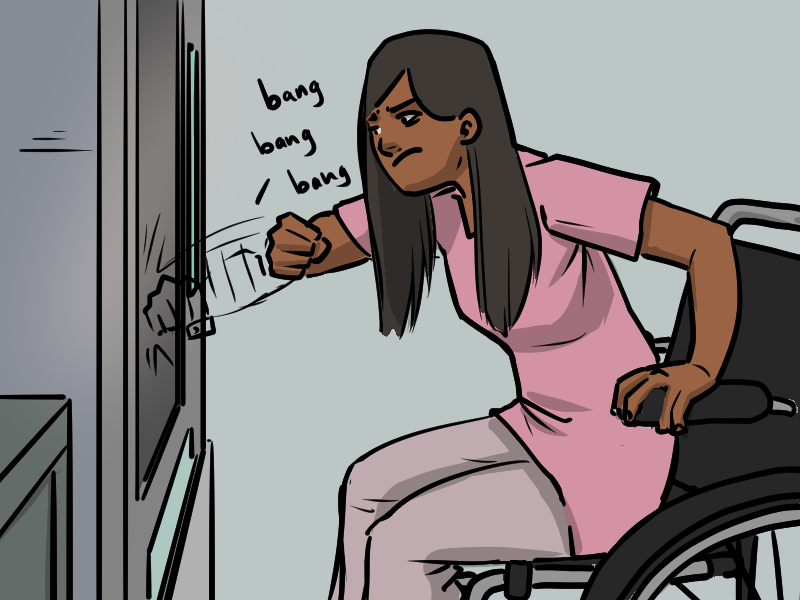 "Argh! Come on! Why are all the vending machines in this place - Aha!"

The bottle, teetering on the edge of the poorly designed shelving system finally gives way and falls into the slot.

Bina bends down and, with as much grace as she can muster in the unfamiliar wheelchair, retrieves it.

She's just leaning back into the uncomfortably slick fake-leather of the chair when the hairs on the back of her neck stand on end. 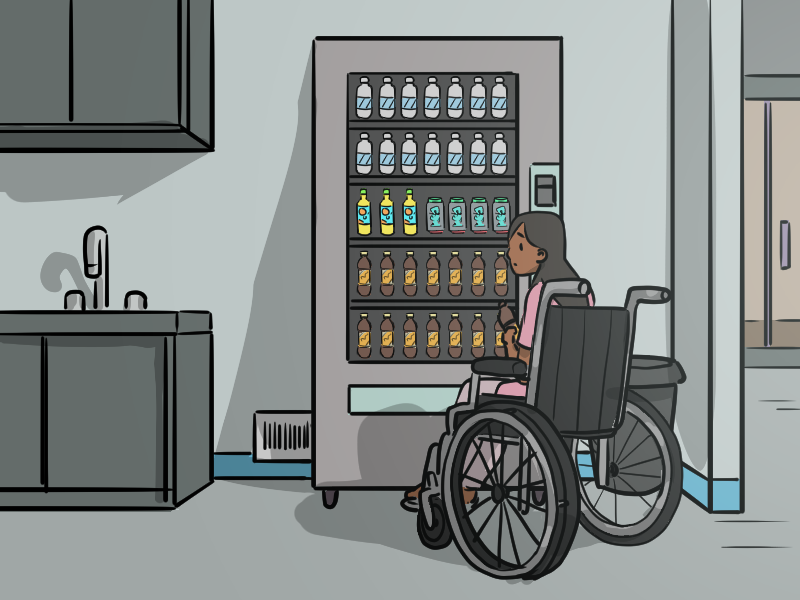 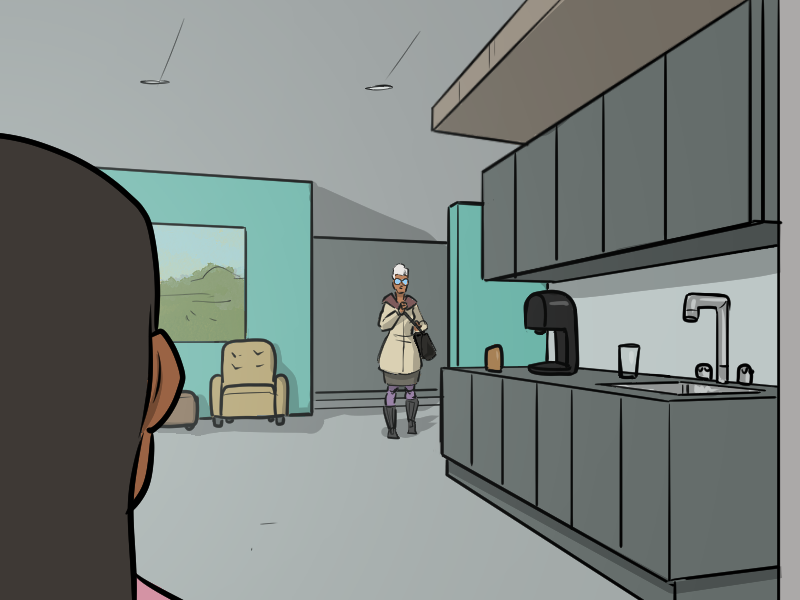 "Oh my god," says the woman, like someone who's been stabbed. "Oh my god, you're real."

She trails off, unsure.

"I looked in the summer," says the woman, stepping forward. "I looked, but I couldn't find you. I'd given up when a friend suggested I check the hospitals."

"No no, I'm fine," says the strange woman, who does not look fine at all. She leans on the wall, and she is unable to hide the fact that the hand that is holding her bag is shaking.

"Your name is Bina, right?" asks the woman. "Bina Miryala?"

Which is right, but she says the name wrong. The syllables, when they come out, are more like 'Binna Miryayla.'

No, no - not distorted, second hand. An old shirt, nearly worn through.

The buzz of the overhead lights is very loud. 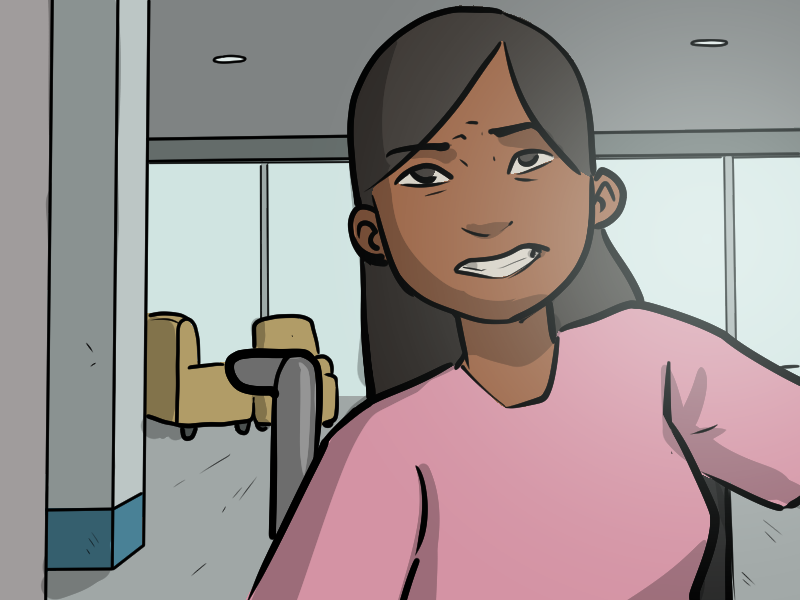 The woman puts her hand to her mouth, holds it there for several long seconds.

"Can you tell me…" asks the strange woman, her voice trembling with an emotion that Bina finds hard to place. Awe maybe. Or fear. "Can you tell me what my great grandfather's name was?"

Which is an absurd question to ask of someone who doesn't know you, has never seen you before, who has spent the last five minutes fighting a vending machine so that she can get a bottle of soda for her girlfriend who has fallen asleep in her hospital room.

It is an absurd question… but she knows the answer right away. Later, she's not sure how she made the connection, because the woman does not really look very much like him at all.

"I didn't get his full name," she finds herself saying. 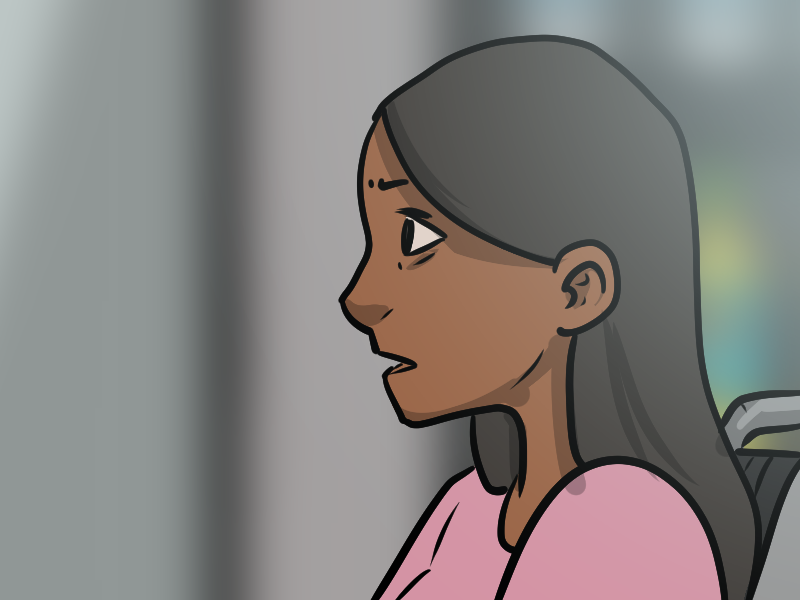 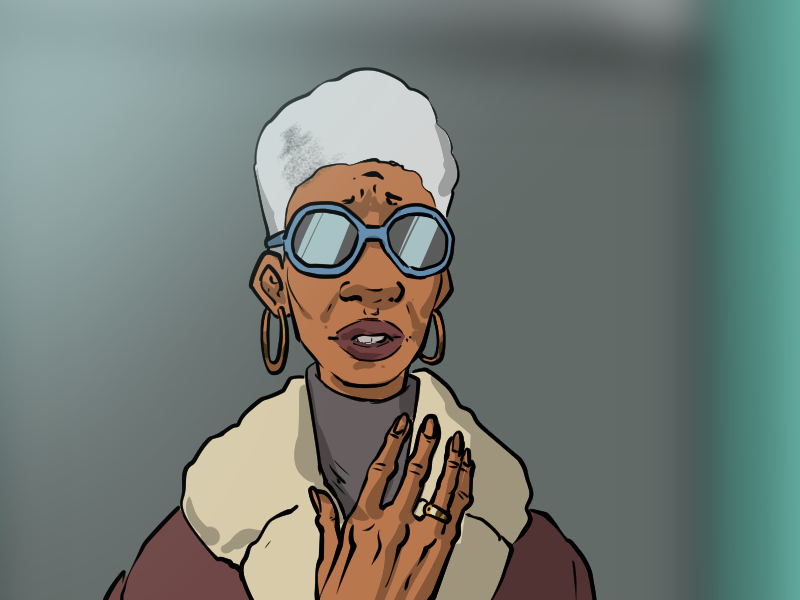 It's a bit later, and Bina has managed to get the woman, who introduced herself as Pamela Bouvier, to sit down and accept a bottle of water she manged to wrestle out of the vending machine.

"We always thought he was a bit, you know… touched," says Mrs. Bouvier. "He believed in ghosts, and time travel, and - oh you know, just a bunch of stuff." 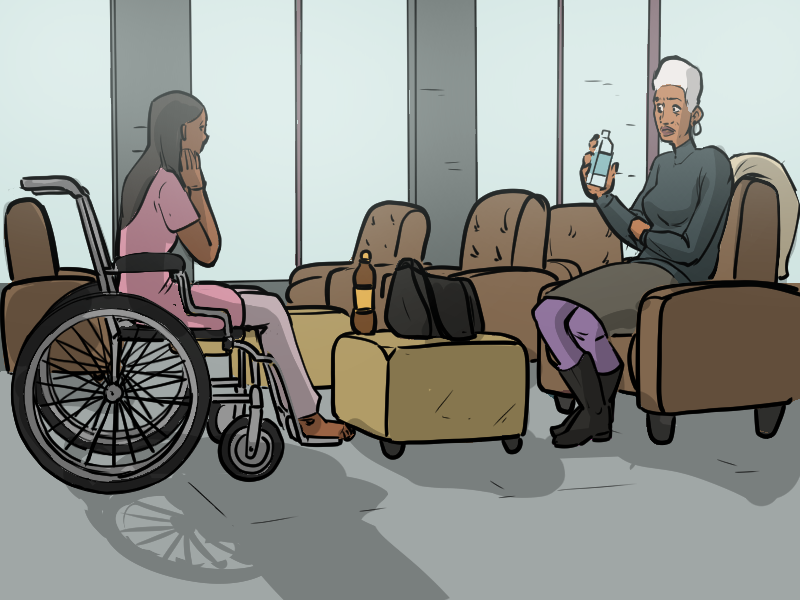 Bina thinks about that for a few seconds. "He would have been… about 70?"

"Seventy-eight," says the woman, with a small smile. "Sharp as a tack, right 'till the end - or so I'm told. This is all old family history you understand. This is him, and my grandpa in 1941, when grandpa was about to head off to war." 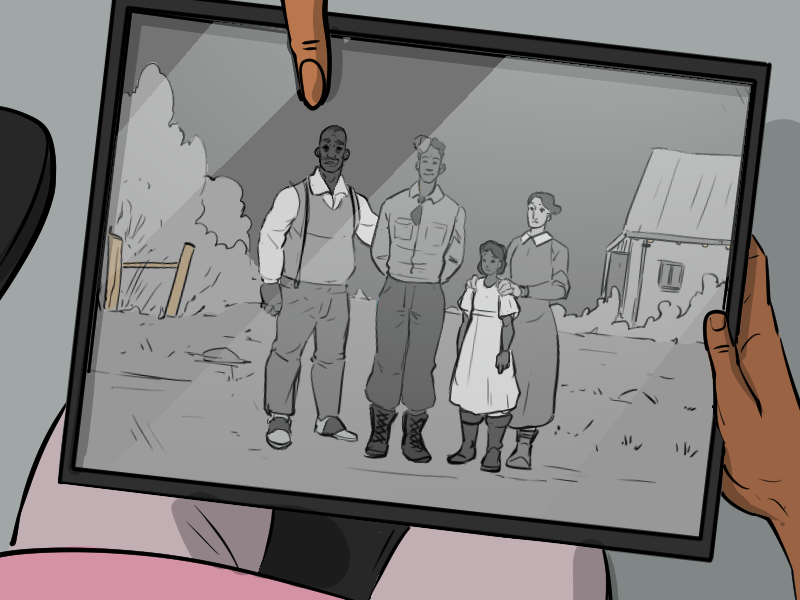 "That's the woman!" says Bina, pointing out the third person in the photo. "The woman he was always with. I thought they were a couple! I never caught her name…"

"Oh yeah!" says the woman, leaning forward to peer at the old photograph. "That's Granny Marseille. Hah - that was a bit of a to-do by all accounts. Him being a black man, and her being a white woman and all. And the times being what they were."

"I'm glad they made it," says Bina, tracing her finger over the cool glass of the frame.

"You're really not lying to me?" asks the woman. She doesn't sound mad. Her voice is flat, stunned. "You really went back in time?"

"He said he worked at two factories at the same time," says the woman.

"One of them was a sugar factory," says Bina. "Called 'Astre Sugar'. They made sugar out of beets."

Mrs. Bouvier laughs at that, a short sharp laugh, full of surprise. 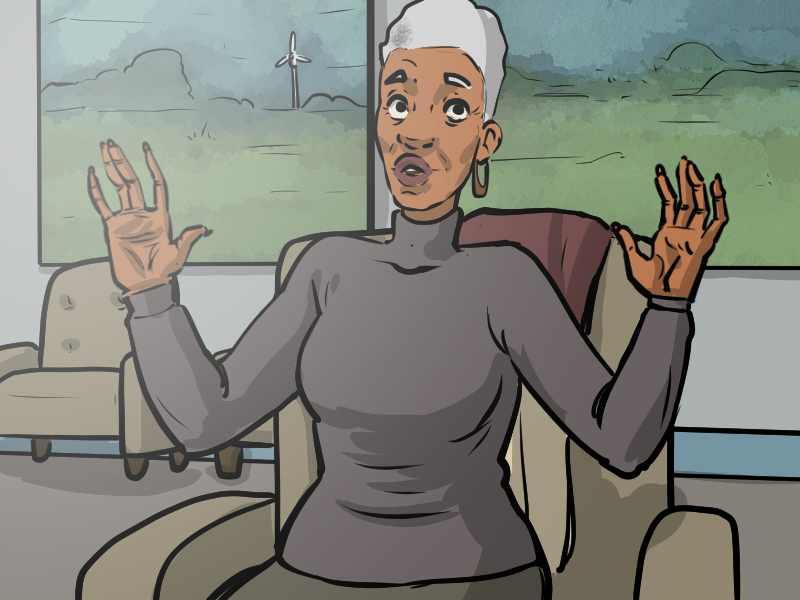 "He was working at a boot factory on the other side of town, had been there the whole time, had a different apartment and everything - and Granny Marseille, she was working in a florist, and the sugar factory didn't exist."

"So that's how it worked out," says Bina. "I'd been worrying about that."

From the overhead speakers, a nurse calls out the fifteen minute warning for the end of visiting hours.

"He said you'd worry. That's why he sent you a message," says Mrs. Bouvier, rustling through her papers. "He gave it to his son, my grandpa there in the photo, and then grandpa gave it to my father, and my father gave it to me. My father is still alive - but he has the Alzheimer's and he doesn't travel anymore."

"It's horrible," says Mrs. Bouvier, handing her an envelope. "But it is what it is."

She leans back in the chair, and it squeaks a little. Bina is glad to see that her face is less pale, and her hand has stopped shaking.

"I didn't really think I'd find you. Papa Leo said we shouldn't look for you until August in 2013 - I did look then," she continues. "But I couldn't find you. With just a name, a name we've been, apparently, mispronouncing and misspelling, and a drawing - it wasn't easy. I'd pretty much given up when my friend Claire - she's a lawyer - she suggested I call the hospitals - and there you were. Here you are, I mean."

"Papa Leo, he called himself a machinist, but he was really more of an industrial engineer - he built machinery for factories, and then for the Navy during the war, but he was also an artist. He drew this -"

She rummages a bit through her bag, pulling out an elderly cellphone, a package of tissues, and three paperback novels. Finally, she retrieves a picture frame from a side pocket and holds it up. 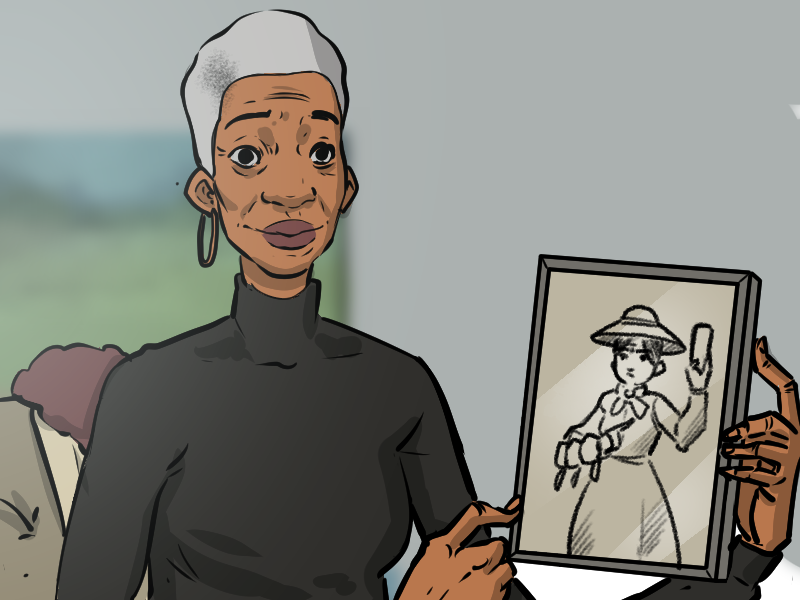 "My dad kept it on the mantelpiece," says Mrs. Bouvier. "Said it was a bit of family mystery. I think it's a pretty good likeness."

"I think you made quite the impression," says Mrs. Bouvier, handing Bina a small folded envelope. 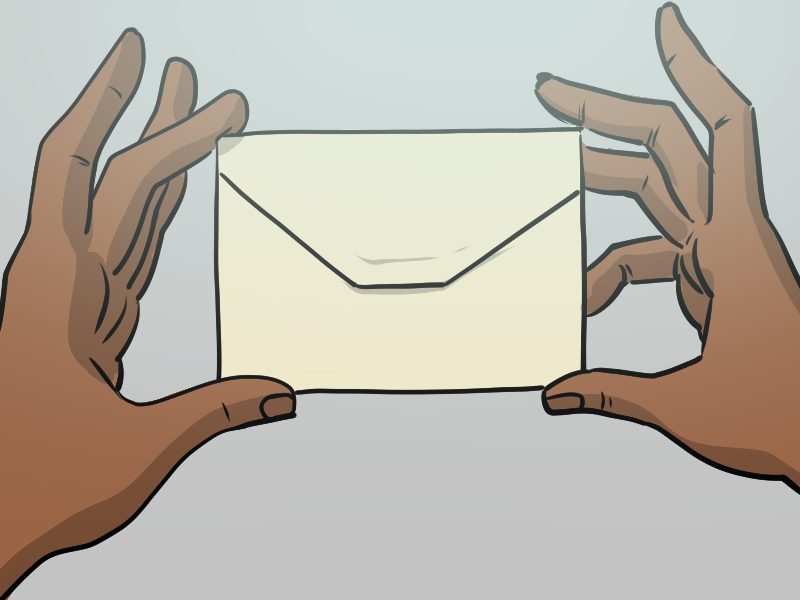 The shape of the envelope chimes in her mind, another little plucked thread of synchronicity.

A coincidence, it has to be, there are hundreds of millions of envelopes in exactly this shape… but still.

"The message isn't the first copy," says Mrs. Bouvier, returning the drawing to her purse. "The original got water damage from a leak in grampa's attic, so my father made a new one in the 80's on his typewriter. The words are the same though. That's the important thing."

I want you to know that first.

That is the important thing.

You do not need to worry about the man either. His wife did for him. She is not, I think, a good woman, or a particularly evil one - but she is proud. She would not stand for being used, not by him or by the other thing. She won't tell me how she did it, but I know that he is dead.

We have talked some, and pieced together what we know. It is from her that I know when to send this message. I suspect she remembers more than I do.

The tablet that started all this, and the thing within the tablet, are gone - or at least, my wife and I have seen no sign of them.

We will keep our eyes open, so you do not have to make a second trip.

Note: This message was retyped by Thomas Duval, grandson of Leo Duval, on May 16th, 1982. The original was lost to rot.


"Do you… understand it?" asks Mrs. Bouvier, after Bina had finished reading through the letter for the second time. "We could never really figure out what he was talking about."

"Is he really talking about a murder in the middle there?"

"I think so, yeah," says Bina. "Josephine was not a woman you fucked with without repercussions."

The two of them sit there for a moment, Bina holding a paper that had traveled almost one hundred years to get to her.

An unexpected, but familiar voice, intrudes on their contemplative silence. "Bina! There you are!" 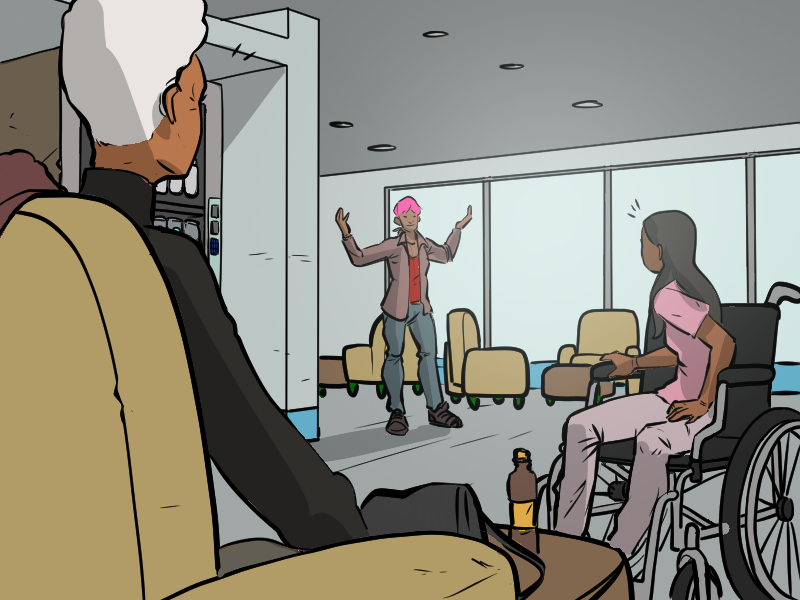 "I woke up and you weren't there," says Laashya.

"Oh! Hello," says Laash, noticing Mrs. Bouvier for the first time. "I'm interrupting. I didn't realize you were in a conversation." 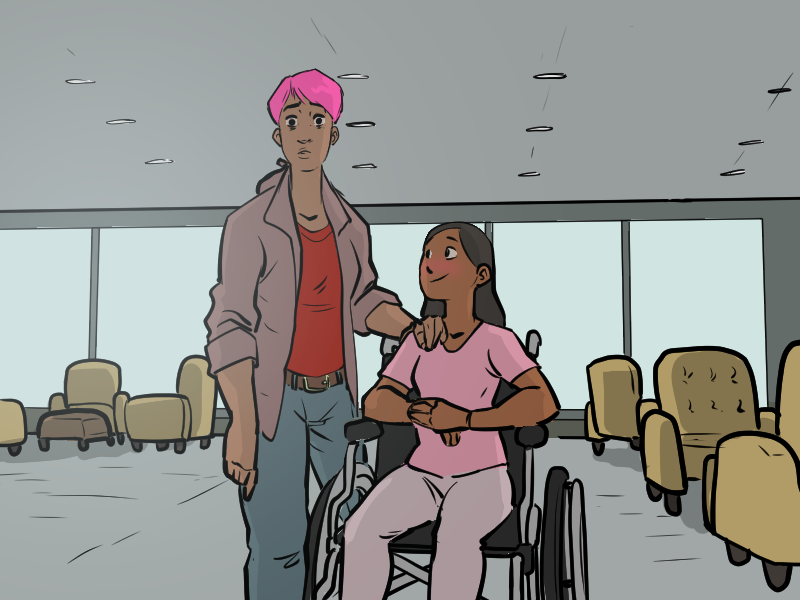 Bina, makes introductions. "Mrs. Bouvier, this is Laashya, my girlfriend." She manages to get those last two words almost entirely without stuttering. Laash squeezes her shoulder when she says it, which makes her face go hot, and she tries not to feel bad about it.

Bina trails off, unsure how to explain what's happening.

Mrs. Bouvier steps in to help. "I'm just here to deliver a message." She gathers her purse up from the table.

"Would you like this back?" asks Bina, holding up the paper.

Mrs. Bouvier looks surprised. "Oh no, thank you dear - but that's yours. Getting it to you was the whole point." 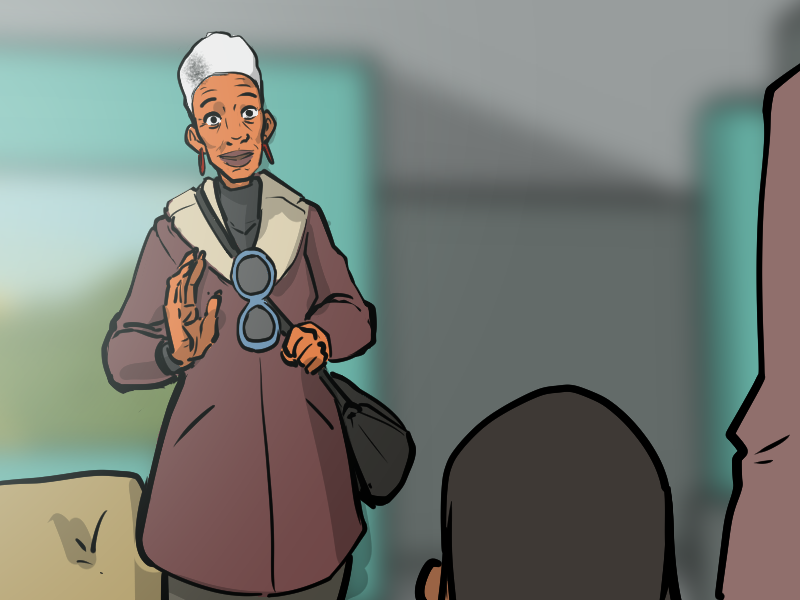 "Um, don't you want to know the story?" asks Bina.

"Desperately," says Mrs. Bouvier. "But it's waited for almost a century, so I think it can wait another few days. If you don't mind me saying - you look very tired, and… the nurses are about to kick me out."

"Me too," says Laash, smiling at Mrs. Bouvier. "But I gotta make sure this one is properly in bed before I leave, otherwise she sneaks out and does ridiculous things."

"She does," says Laash, with a wink at Mrs. Bouvier, who smiles.

Bina tries not to pout, as that would ruin whatever time traveler mystique she has managed to retain.

"Thank you," says Mrs. Bouvier, smiling at the two of them. "My number is on the back of the letter. Please call me when you… when you have the time."

Laash and Bina watch her go. She waves, only a little awkwardly, from the elevator.

"She seemed um… nice, but also kind of spooked?" says Laash, pushing Bina back towards her room.

"She was," says Bina, as Laash pushes her back down the hallway towards her room. "Both those things." 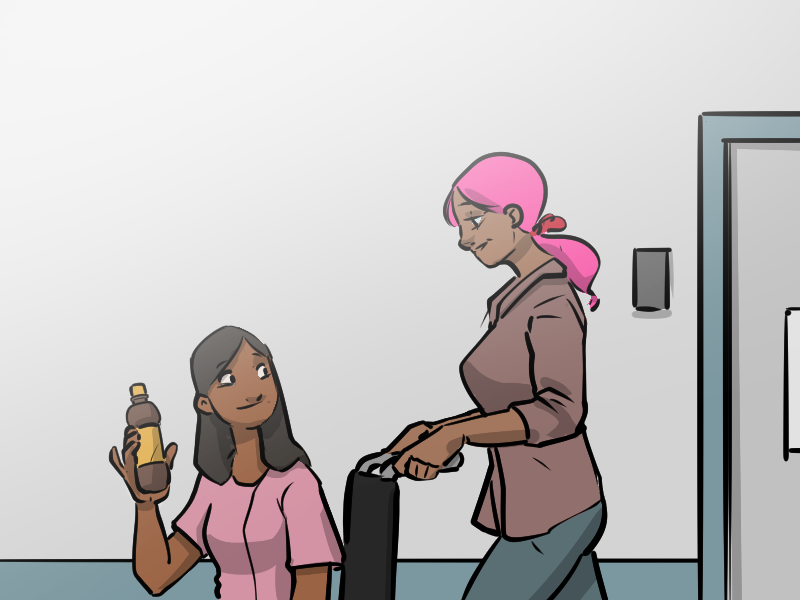