"No! That would have been weird, because she is probably dead, and also lives in the past. I meant Hyung. The developer. She of the couch sitting."

"Yeah, I saw her last week while I was doing my rounds."

"What was she doing?"

"It was near the empty lot one street over. I've been giving out like two or three tickets a week day over there. Lots of cars, police, stuff like that. I thought there'd been an accident. I only remember her because she was shouting at someone. The cops I think."

"So how did you get back here? I mean, back to this time. From the sugar factory."

"Yeah, on my grandmothers scarf."

"I sort threw it and hooked it on a star, and then I climbed it. When I got to the top I woke up here. Upstairs I mean, in the Laundromat."

"I don't know what to think ok? It's all pretty weird."

Bina and Kendra continue down the tunnel. The floor slopes upward, not a lot, but enough that after several hundred feet, the mud now reaches only to their ankles. 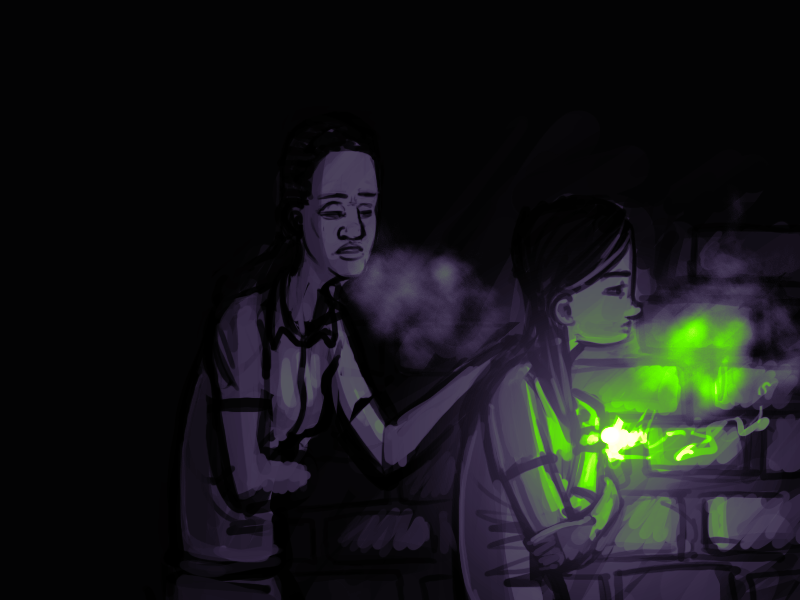 "Isn't it supposed to be summer? I distinctly remember being worried about heat stroke earlier today."

"I don't think this place got the memo."

"You know you're, uh, speaking ok now? No more messed up words."

Tiny muscles in Bina's neck, muscles she had not even know she had, relax. An easing of unobserved anxiety. She had been worried that it was going to be permanent.

"Do you know what caused it? The talking thing?"

"Well you know how I'm making you keep your eyes closed because of the spooky stuff in my arm? I'm not being paranoid. Ok, I AM being paranoid, but I'm not JUST being paranoid. I've got good reason to be cautious with this stuff."

"What can happen if you're NOT being cautious with this stuff."

"No, it looks like the tunnel bends just ahead of us, and I think I see a light. A real light. Maybe."