"She'll still be there tomorrow," says Bina. "A version of her will be. In a way."

"Hrm," says Kendra, unconvinced. "But she won't remember our conversation. You won't have ever given her that money."

"Look - I don't… I don't know how to think about any of this," admits Bina. "The ethics of this situation are a confusing mess. I've been imagining trying to describe this situation to like… a philosopher or something, but I wouldn't even know where to start." 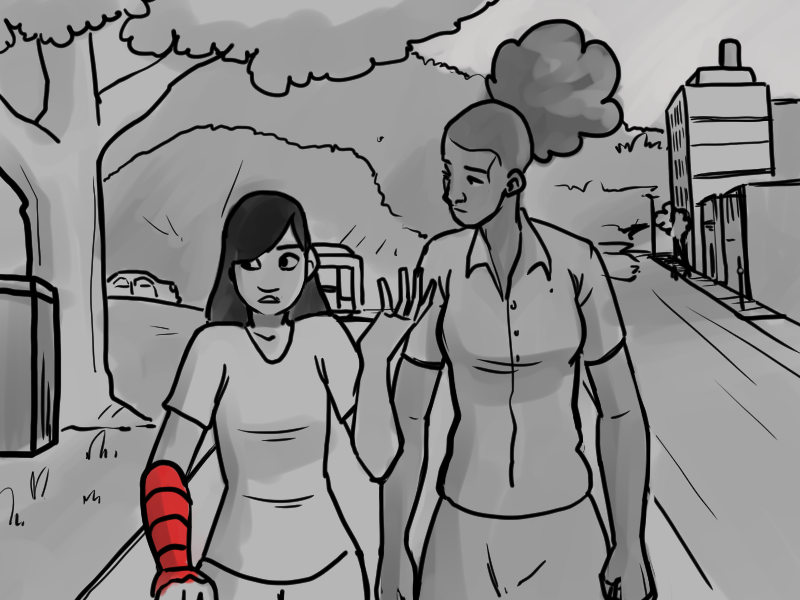 "Tell me about it," sighs Kendra.

"We do what we can," says Bina. "We have to stop the Botfly, but that doesn't mean these people here don't matter. They matter now. I'm not going to stop trying to save them just because they might… stop remembering later. Stick enough laters on everyone and we all end up dead."

"I mean, I've already died like - five times, so I hear what you're saying," says Kendra, looking down at her friend and smiling. "All right. We'd better go. You think Amie and Emmie did the thing?"

"I hope so," says Bina, her new cane clicking on the pavement, as they start walking towards their rendezvous point. "I mean - the universe is still here, so it's a good bet. They just have to do the one thing. It shouldn't be too hard, right?"

"Right," says Kendra, trying to sound more confident then she is.

Hey! So this last little while of doing lots of prose has been very cool, and I'm glad that everyone has been really into it. I plan on continuing to use this style up to the end of the story (which, if I keep writing over 1000 words a day, will be relatively soon), but I'm going to do that… aaafter the holidays.

While it is undeniably a much faster way to burn through story, it is also considerably more work for me - so I'm going to be going back to my more standard 200 - 400 words until the new year.