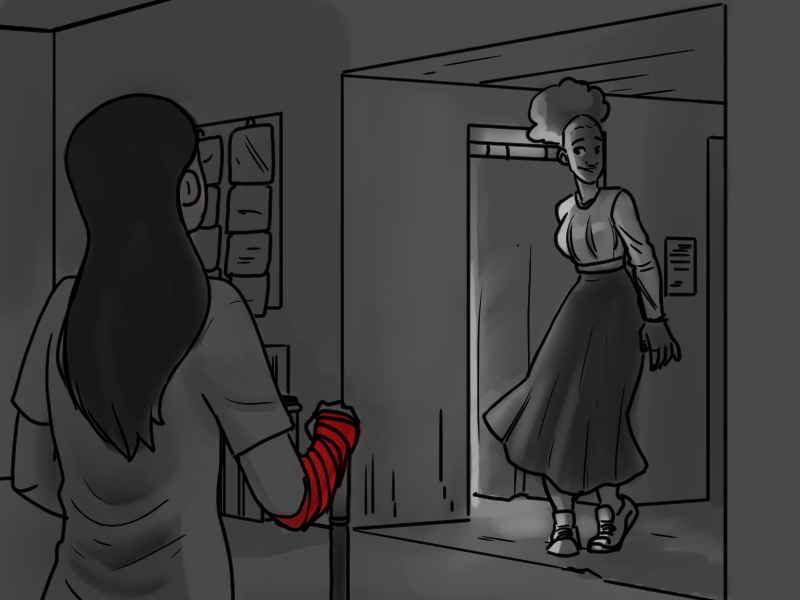 The overhead lights were still off, but her strange customers had brought flashlights with them, big ones, and the light from inside the change-room was enough to see her by. The short girl leans on the not-a-real sword-cane with an expression on her face that seems a bit too serious for picking out a costume.

"It doesn't have to work for long," says the tall black girl, looking at herself in the mirror and adjusting the collar of the white blouse. She catches Marie's eye in the mirror and smiles. "You know clothes, right? Is this the kind of thing a professional woman would have worn in 1910 or so?"

That is a pretty deep question, as far as sartorial history goes, but this is Marie's bag and she answers quickly. "That depends on what kind of profession," says Marie. "And social standing. And country. And a couple of other things - but what you're wearing is a pretty good bet."

"Factory worker," says the woman, looking at herself critically. "From here, Montreal. You don't think this is too posh?"

Marie steps forward, knowing she probably shouldn't get involved with these two, but unable to stop herself. "Oh no," she says. "Things were very different then. A long skirt and a white blouse, possibly with an apron or a smock, if the work was mucky."

She checks the cut, and the size, as she's speaking. "And a hat, of course, or a scarf, if you were outside."

"It is outside," says Kendra. "And a sort of formal occasion."

"Then definitely a hat," says Marie.

"Not like that one I'm guessing," says the woman, nodding at her top-hat, which is slightly too large for Marie's head and has a tendency to slip down over one ear.

"No!" says Marie, righting the hat on top of her head. "More like…" She looks over at the far wall where a row of pegs where various hats and masks hang down over a set of shelves. "More like that one," she says, pointing at a wide-brimmed hat with a jaunty swing to the brim and a cluster of leaves and berries pinned to the side.

The woman seats the hat on her head and steps back, taking in the whole effect. "I like it," she says. "I mean - I wouldn't want to have lived back then, but it's better than the uniform I wear now."

"What about shoes," asks the little one. "Those running shoes aren't going to do will they?"

Marie looks down, at the womans blue running shoes peeking out from beneath the skirt. "Ah, no - but a black leather shoe or low-heel boot would do it. We don't sell them, but there's a few shops down the road that would have something that would do - if you're not trying to be completely authentic. If you are… you'll probably have to talk to a shoe-maker. There are some good ones in this area."

"I think off-the-shelf will be fine," says the tall one, responding to her, but checking in with the little one for confirmation. "Like you said, it doesn't have to last long."

Cosplay then? Or maybe some kind of flash mob? What are these two doing?

"You're taking that?" asks the tall one, gesturing at the cane with it's air of polished menace. "A bit grim, isn't it?"

"What about your costume?"

"Yeah - and if anyone walks in on you? They'll know something is wrong immediately."

The tall one folds her arms, staring down at the small Indian woman with a skeptical look. "You said Josephine thought you were naked last time."

Kink then. Maybe…? Marie isn't an innocent little virgin, but she's never heard of anyone having a 1910's women's factory worker fetish. Still, the internet is a wide and unusual place.

The overhead lights flicker back on, blinding after almost an hour with just the light filtering in through the windows.

"Sorry!" squeaks Marie. "It's been doing that all day."

"It's fine!" says the short one, clearly attempting to take advantage of the distraction to avoid having to try on costumes. "Guess we'll have to go!"

"Bina," says the tall one, her voice hard.

"It's been dark the whole time," says the tall one. "And we have flashlights. Come on, I thought you liked skirts."

Marie decides to be reassuring. "I'm sure we'll find something you'll like." She takes a breath, then, with deliberate casualness asks, "Is this for a… play?"

"Hah! No," says the tall one, adjusting her hat, somewhat pointlessly, in the dark. "Good guess though."

Well… she's already asked. She might as well keep going. "What… is it for?"

"If we told you," says the short one. "You wouldn't believe us."