Primary Temporal Position: 2032
Reset Temporal Position
Marie had given an awkward wave, but nothing more. There was something about the two of them, together, that pinged unnamed senses honed by years of working retail. Most people, most customers, aren't really there when they're in the store. They're inside their own heads, imagining the party, or the convention, or sometimes the bedroom, where their costumes would be worn.

These two? Not so much. They were here, really present in the store, in a way that very few people ever are. It was that immediate presence that made her think, at first, that they were homeless, that and a kind of ragged fatigue that seemed to drift off of them in waves.

Now, the tall one is in the change-room while the short one is playing around with their collection of walking sticks and swords, and having what is the weirdest conversation on her phone that Marie has ever accidentally on-purpose listened in on.

It's a technique she learned years ago, you just drift over near someone and start re-stocking something, or fiddling with the shelves. It's harder to do when the store is otherwise completely empty, but she doesn't really care if they notice her interest. These customers worry her. She doesn't think they're planning on looting the place, but they're definitely up to something. She stays close, hidden behind shelves full of faerie costumes, and togas.

"Yes," says the tiny one who walks with a limp. "I'm dead serious, you need to evacuate. No - I - no, listen to me. There are more of those things like the ones at the hospital, OK?"

She pauses here, glow-in-the-dark witches wand from out of the rack and rolling it between her fingers, assessing it.

"How far?" she asks, putting the stick back and selecting a gnarled wizard staff and hefting it. "As far as you can! I have no idea what this thing is going to do when I set it off but there is a 100% chance of ridiculous bullshit, that I can guarantee. Potentially lethal ridiculous bullshit."

Maybe they're roleplaying? But the short indian woman looks sick, and walks in a stiff and awkward way that suggests she's maybe hurt as well. There's also the way she's talking, which doesn't sound like a game at all.

There's a long pause, and Marie shuffles and pretends to re-shelve some goblin masks.

"Hey!" calls the woman, without warning. Marie starts, and realizes that the woman is looking at her and holding up a long polished bamboo stick with a silver filigreed butterfly on the handle. Marie gasps, her heart in her throat for no-good reason at all, and almost doesn't hear the question that followed. "Do you have a… whatsitcalled - a swordcane? A cane with a sword in it? That would be cool."

"Y-yes," says Marie, pointing to the previously discarded stick. "The Jack the Ripper one. That one. It's got a catch in the handle."

"Ah," says the woman, picking up a black walking-stick. 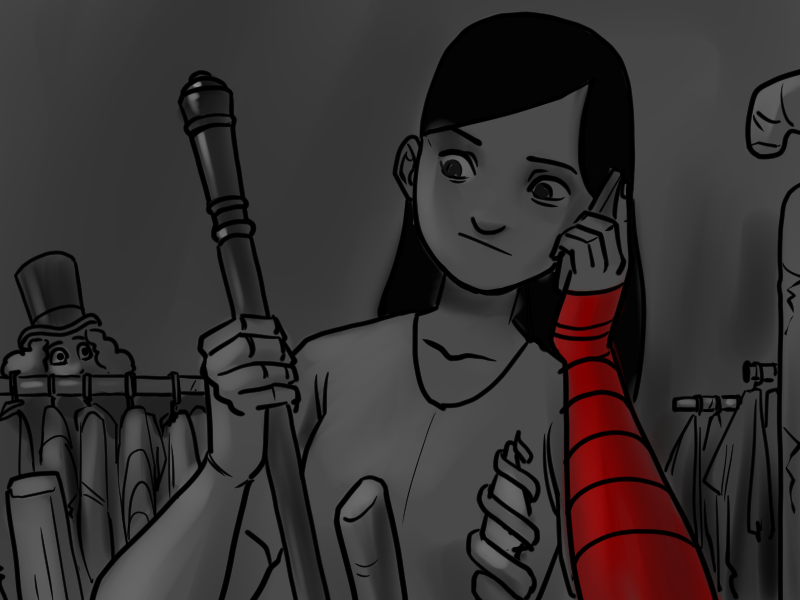 It's overdone in a number of ways, but the woman doesn't reject it out of hand. She fumbles a moment, one handed, with the handle until she finds the clasp. She pulls the handle out, dragging a silvery blade with it.

"Ahh," she says, then, again, disappointed. "The blade's plastic."

Somehow, Marie is not surprised in the least that this woman wants a real sword. "Errr yes? It's a costume," she says, picking her words carefully. "This is a costume store."

The girl sighs, "I know - still, it might be useful." Then, into her phone, "What - Oh, nothing. Just buying costumes. Like one does. At the end of the world. You were saying?"