First - when she got in to work, there was no power. Charlotte, who had been there since six that morning, said that it had been on and off all day, and when it came on, about half an hour after she got to the store, it didn't stay on.

It had been touch and go all day, the lights flickering, the already buggy point-of-sale system they used in their cash registers rendered entirely useless, to the point that Charlotte, had put a 'Cash only' sign on the counter at about ten that morning.

Not that there had been many customers anyway. The whole city seemed to be suffering from brownouts, even in vital city systems like the street lights. When Marie had gone out for lunch, there were cops in the middle of the intersection, with white gloves on, directing traffic.

Marie has been quietly dreading getting home all day. Her regular route takes two subway lines to connect her little Cartierville apartment to the store on rue Montreal where she works. Without the subways running, she's looking at a long and uncomfortable bus ride to get home.

Charlotte, the kind of person who has to speculate about every situation regardless of whether she has anything useful to say, told her that it has to be one of the big transformers that blew, or one of the long tracks of high-tension wires getting knocked down in the storm last night… but Marie isn't sure. During the brief periods when the old wifi router has been working, all she could find while painstakingly searching local news on her phone is 'brownouts continuing' and short videos of confused looking reporters talking about the unseasonal chill.

And it is chilly. The furnace down in the basement is, obviously, off, it's July and an unseasonably hot one aside from this one chilly day. They'd resorted to pulling the few spot heaters normally used for drying the entry mats in the winter out of storage and sticking them around the counters.

That worked, but only when they had power, so they supplemented this by wearing several layers of stock.

Marie is currently wearing a long, electric blue jacket from a magicians costume, complete with bow-tie and top-hat containing in the upper third of it's black barrel, a secret compartment within which hides a small stuffed rabbit on a spring. Beneath the jacket she's wearing two pairs of tights, tiger stripes over spiderwebs, under her shorts.

Charlotte, no better coordinated than she was, had resorted to wearing a pirate costume over an an astronauts jumpsuit.

Marie loves clothes, it was why she accepted the job in the costume shop, even though Starbucks offered better benefits and more forgiving hours. The makeshift outfits are a fun distraction from the dark and the creeping unease of the day. There are a few advantages to working in a place with an enormous amount of silly costumes.

Then Charlotte had gone home, her early shift ending at 3:00 pm, leaving Marie alone in an empty and frequently dark store. She'd tried calling her boss, who never came in on weekdays, wanting to close early due to the lack of power, but her phone's signal was as sporadic as the wifi, and she really didn't want to get fired. Over the next several hours, the combination of boredom and anxiety gradually chips away at her resolve until she made a deal with herself. She'd leave at 7:00pm, regardless of whether she could get in contact, she'd stayed late enough and nobody had come into the store in over an hour.

She'd been trying to read a book on her phone, something non-fiction she'd picked up during a sale that she wasn't really interested in, when the weird customers had walked through the door. 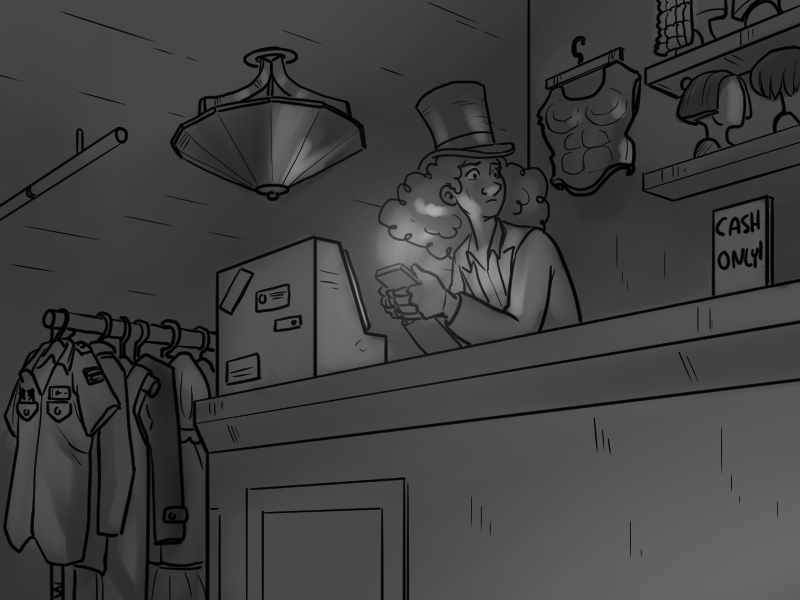 There were two of them, a tall one and a short one, and they hadn't even hesitated at coming into a store where all the lights were off.

"Is this place even open?" the tall one had asked.

"Yep!" said the short one. "See the magician behind the counter? It's open. You're open, right?"

"Fantastic!" said the little one. "This will do just fine."