Primary Temporal Position: 2028
Reset Temporal Position
"You want another water?" asks Bina, holding out a thin plastic bottle to Amie, who is half-sitting, half-leaning, against the back of the truck.

Amie looks up, surprised, then down at the half full bottle in her hands, "No I - I'm good."

Bina looks at the sky, where a desultory drizzle of rain is sifting down from low hanging clouds. It never reached downpour levels in loop Twelve, but the day is damp and clammy.

"You're gonna get wet," she tells Amie, sitting down on the tiny cot they'd screwed into the side of the panel van. The springs squeal as she does, and she leans against the wall, uncapping a second bottle, and leaving the one she offered to Amie on the uneven wooden floor of the truck.

They'd been back at the truck for about an hour.

Kendra rounds the edge of the truck, peeling off a pair of work gloves that are spotted with black smears. "OK, we should be good to drive this thing," she says. The truck's engine has a tendency not to so much require frequent top-ups of oil, as to instead guzzle it wholesale like some lubricant obsessed version of Cookie Monster. "Is Emmie back yet?"

She holds out the extra bottle to Kendra, who takes it gratefully, plunking down beside Amie, her legs dangling over the edge of the truck.

"He's not going to be able to find her," says Amie.

"I know," says Bina, looking down the alley where Emmie had gone. He had wanted to, in his words, have a quick look-around for Twelve, before they left. They're almost certainly not going to be able to come back here for her. They're out of time, the Moment is nearly dry.

Emmie appears at the end of the alley, his white shirt damp, glasses fogged with the rain. He notices them watching him and he shakes his head.

"No luck," says Emmie. "I checked the apartment, but I couldn't get close to the dig-site. There's cops all over the street in this loop."

"She won't be found if she doesn't want to be found," says Bina.

"I still thought we should try," says Emmie, climbing up into the truck. He pauses and pats Amie on her shoulder. She forces a smile, but doesn't look up. Amie has been subdued and withdrawn since they came back. They all have.

Their landing back in loop twelve had been one of the hairiest situations they'd been in.

It had gotten extremely hairy there. When they'd collided with the Twelfth loop, they hadn't exactly stopped. The physicality of interacting with the time-line is always disorienting, but it was more like crunching into the ice over a pond that hasn't quite had enough time to freeze yet. It was only through a panicked scrambling that they'd avoided falling through, grabbing each others hands and shirts, as they clung to the edge of the time-line, then crawled, with difficulty, back over the ledge.

They'd seen nothing of Twelve, she must have left before they got there, but they DID see the naughts. They'd spread out a bit, only one of them was still in the tent after whatever had happened to Twelve when she arrived back in the same place moments before.

There were still enough that it had been a close thing. They hadn't dared teleport out using the Moment, not immediately, for fear of creating another situation like the tower, so they'd had to run again, out through the rip in the back of the tent, then a mad dash through the choking dust, with naughts hot on their heels.

Or, at least, the others had run. Kendra had carried Bina, who hadn't even managed to get back to her feet by the time the naughts were almost on them. Her memory of their flight is watching through her hair as Kendra's shoes kicking up dust and grit, and their enemies closed in behind them. 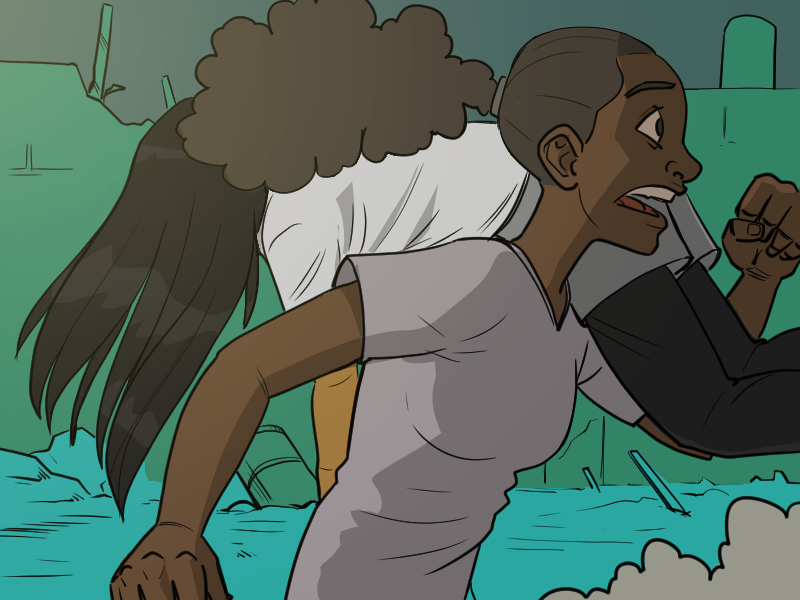 They'd only made it about a short distance, just barely past the first row of buildings surrounding the research camp, when the naughts had caught up with them, dried dead limbs out-pacing faltering mortal ones. Bina had screamed 'Huddle! Now!' with what little breath hadn't been pounded out of her lungs by Kendra's shoulder, terrified that they'd leave someone behind, or - just as bad, bring something dangerous along with them.

But they'd made it out. Amie and Emmie had practically tackled Kendra to the ground, and the Moment held out for another desperate jump.

"I'm still counting this as a win," says Bina.

"I'm serious!" says Bina. "We're all alive. We contacted Three and got her to make the lego piece. And, I mean, it got pretty hectic there for a few minutes, but we made it through together, and all right."

Still, they did all manage to make it back in one piece.

"What do we do now?" asks Emmie, having noticed that everyone else is drinking, and rummaging in the cooler for a bottle of his own. "You two haven't told us your plan yet."

"Right now," says Kendra, stretching her back and rolling her neck back and forth. "Right now we need to empty the Moment."

"Of what?" asks Amie, looking up at Kendra.

"Everything," says Kendra. "All the time machines, the supplies, all the journals. We should be able to fit everything in the truck."

"Some of that stuff we're going to need," says Bina. "And I don't want to take the risk of the Moment eating the time shards inside the other time machines. That could get messy and explodey."

Emmie squints at the truck, the majority of which is still taken up by the massive rectangular bulk of the Bomb. "It'll be a tight fit. There's still a bunch of stuff in there, and this isn't that big a truck."

"If we have too," says Kendra. "We'll leave the less important stuff here."

"We go back to our loop," says Kendra, finishing her bottle and climbing up into the back of our truck.

"And then," asks Amie, her voice lower.

"Not much, I mean - compared to what we've already done," says Bina, finishing her own water and standing up, despite the considerable protests from her knee joints. "Just rescue the hostages from the fortress of our enemies, stamp on the Botfly's fingers, then blow up the universe - nothing to it really!"

Bina can't help but let a hopefully-less-crazy-than-it-feels grin crawl over her face at the looks on the faces of the other three members of her team.

"C'mon! It'll be fun! Where's your sense of adventure?"