Really gone as in, left the time-line.

"She's really gone," says Bina. She needs to sit, but not on the couch. Last time, she'd barely made it back to her feet, and if Three is going to play silly-buggers then she might need to pop up again. Sit on the table? She'd done that earlier…

"Whatever," says Three standing up. "That's not how time-travel works. I'm out. I have no interest in meeting these naughts that are following you, OR waiting for Twelve to show up again with a shotgun or something."

To her surprise, Three stops in the act of pulling the Moment out of her turtleneck. "What?" she asks. "I'm serious about the naughts. Not interested."

Bina looks over at the two Amie's. They're managing to sit next to each other entirely without shouting. The enthusiasm of this timeline's Amie appears to have been muted somewhat by all the arguing, but when she realizes that she's being looked at, she gives Bina a hopeful grin.

"I need something," says Bina, turning back to Three, and leaning against the counter. "From you."

Bina waves a tired hand at her. "We can. This is where I tell her. I can't think of a better time."

"Provided you give no details," says Emmie, who looks nervous. He's sitting at the table beside Kendra, who has the Not-Yet propped up against the wall beside her. "Of what it is or… other things."

"Tell me what?" Three looks suspicious, as though she were about to be ambushed.

"Ask you," says Bina. "I suppose. For your help. You said you were trying to help us? Well - I need some of that."

"What kind of help?" asks Three.

"I need you to build something," says Thirteen. "I don't know if you know much about my plan -"

"I don't know anything about your plan," says Three. "Except that you have one, and it involves mucking about in other time-lines, and that you took the Slingshot from Six."

"Do we have that?" asks Bina, looking at Emmie. "Here? We didn't leave it in the truck?"

"No," he says, getting up and going over to the bag. "We left the other things, but we brought that. It's small so it fits in the bag easier." He bends down, and rummages for a few seconds before retrieving the black lacquered box that Six had given them. He hands it to Bina, with a nervous glance at Three.

Bina undoes the lid, holds it up for Three to see. 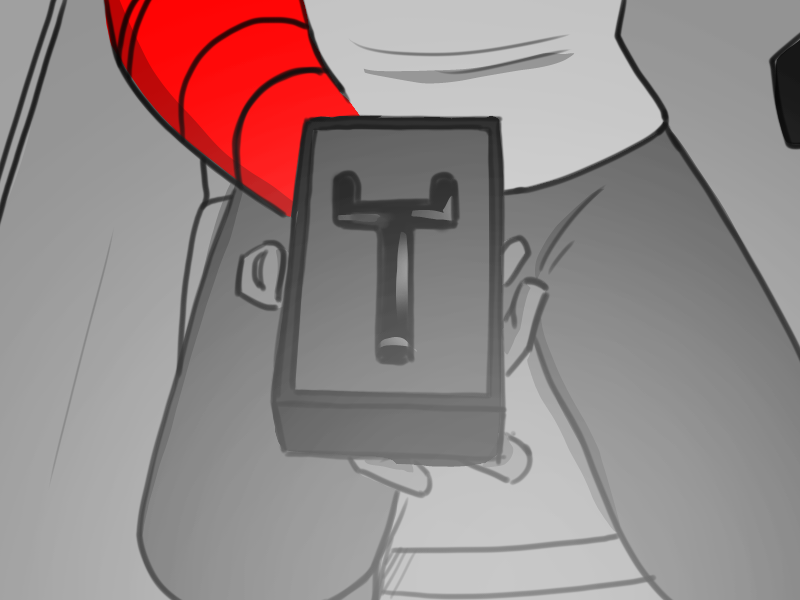 Bina can feel Kendra's tension beside her, but Three makes no move to take the tiny device, merely bending down to look at it.

"You know," says Three. "I think, of all of us, Six was probably best at the time travel stuff. Best at aesthetics at least. I never came up with something like that, and I've been at this for two years now."

"Do you know what it does?" asks Bina. Six hadn't provided a ton of details about how the Slingshot worked, just how to activate it.

"It takes you to tomorrow," says Three.

Bina stares at her, waiting for her to elaborate, but she doesn't.

"I'm going to use it," Bina says, eventually, closing the little box and putting it down on the table where it makes a little click-CLACK against the plastic surface. "And I want to take people with me, I want to take everyone with me."

Three's eyes dart around, from Kendra, to Emmie, to the two Amie's who are watching with eyes wide.

"What people in the factory?" asks Three, frowning at her.

"The people who were at the experiment, the ones who became the naughts," says Bina. "All of them."

"More like sixty five," says Bina. "There's Hyung and Petrovich as well, and a Swat team, I think."

"Look - A lot has happened," says Bina. "But the important thing is, I'm not leaving anyone with the Lady. I'm taking all of them."

Three looks confused, she sits down again and runs her fingers through her hair, combing out a bit where the ends have snarled up a bit, then pushing it back behind her ear. "Can't be done," she says, finally. "Too much weight, to much entropy. A couple of people, maybe, but -"

"Everyone," says Bina. "I'm taking all of them. She gets nothing. She keeps no-one."

"It won't even matter!" says Three. "Even if you could do this - she'll just follow you into Tomorrow. You-"

"You've got to be kidding me," says Three, staring at her like she's grown a third arm out of her head.

"I… can't," says Three, hunching her shoulders up around her ears. "I wouldn't even know where to start! You're talking dozens of people all with different PTP's, some of them from a hundred years in the past! You're - you're trying to launch a rocket with a bunch of random chains on it! You can't aim doing that!? " She stares at Bina, aghast, "This is your plan?"

Three looks up at that, suspicious, first at Bina then at Amie-Five. "You… you already have it, don't you. This 'life raft'. You're ahead of me! That's why Amie called you into the room after we all told our stories!"

Bina just stares at her. Beside her Kendra's face is wooden. Emmie coughs embarrassed into his hand.

Outside, muffled by intervening doors, comes the sound of splintering wood.