Primary Temporal Position: 2020
Reset Temporal Position
The door clicks shut, leaving them in the vaguely stuffy dimness of the hallway. The smell had always sort of confused her, a strange sweet combination of cabbage, cinnamon, and some kind of floral carpet cleaner. It's not a great building, not by a long-shot, but even in the few months that Bina has lived in the place, it's become very familiar.

"What!?" asks Twelve, unable to wait any longer. "What do you want?"

Bina sighs, and sits on the chair that Kendra vacated, not even trying to stifle a groan. "Just thought you might have wanted out of that room," she says, stretching a little and wincing at the feelings from her knees. "I know I did."

Realizing that there's no specific revelation coming, Twelve grunts in frustration and holds her fists to either side of her head. "Ugh! I - you know she's using you, right?" The change from frustration to entreaty is matched by a step forward towards Bina, her eyes wide and pleading.

She stares at Bina, eyes wide. "Right? You can't be that blind."

Bina sighs, not so much refusing to respond to Twelve's agitation as just not being up to it. Her fatigue is like a living thing she has to wrestle every time she moves. "Maybe," she says, closing her eyes. "I know I'm using her."

"But she's older!" says Twelve. "And she's watched everything! You're not - you can't possibly think you have the upper hand here!"

"I don't," says Bina, feeling a bit chilly in the hallway and wishing she'd worn her coat. She spares a second to consider the idea that the fever might be coming back again. She puts that thought away for now. "I just think I have a different perspective than you do."

Bina looks down at her hand, the bad one, wrapped in the red coils of her grandmothers scarf. "I just… I don't think I'm a bad person."

And she realizes, when she says it, that she means it, and some long held tension inside her uncoils. She laughs, a little snort, then a louder one, knowing that this is not the right thing to do in this conversation, but unable to stop them from bubbling out of her.

"I don't think I did this!" she says, turning to Twelve who is staring at her in confusion.

It's like finding a muscle that you never noticed before, and realizing that, for your whole life, you've been clenching that muscle as hard as you can. An invisible tension that you can finally relax.

She snorts again, and puts her hand up in front of her mouth to stifle the giggles. "Sorry - I'm not laughing at you, it's just - I don't! I actually don't!" 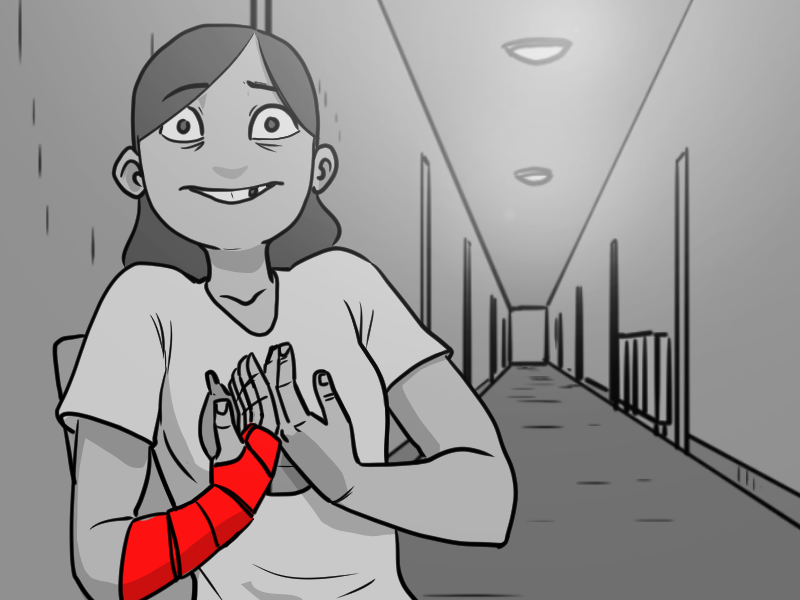 The relief is such that she feels almost giddy for several seconds. Long enough for Twelve to realize the implications of what she's saying. "I'm going," she says, turning away.

"I know," says Bina, breathing in. "And I'm sorry. You're not going to fight me, like you said, I can barely stand, and if you can't fight…"

If she can't fight, she's going to run, which is exactly what Bina knew she'd do when she brought her out into the hallway.

"You don't believe me." Twelve says, not turning around to look at her. "Eleven didn't believe me either. Do you know how horrible it is when even you think you're crazy?"

The giggles, now back firmly under control, do not interrupt as she says simply, "Yes." She means that too.

Twelve's hands clench into fists again. "You're not better than me."

"None of us are," says Bina, suddenly very tired again.

"The Botfly isn't an alien!" says Twelve, through gritted teeth. "Or a ghost, or a god!"

"Is that what's scaring you?" asks Bina, looking at Twelve's tension-filled back from beneath eyelids that feel as heavy as lead shutters. "That she really is what she looks like?"

There is silence, for a long time.