"No!" says Twelve. "I'm not letting you get away with this."

"Now - everyone," says Emmie, in precisely the wrong tone of voice for this situation. "Please! We don't need to escalate this again! Just - let's all sit down and talk about this."

Finding yet another target for the anger that has been bubbling just beneath the surface the entire time Bina's been watching her, Twelve glares at Emmie. "Oh yeah right, like you're going to make me."

"Oh very nice," says Twelve. "I'm sure that makes you feel all nice and heroic to say that. You can hardly stand."

"Yeah, which is going to make it really humiliating," says Bina. "Let her go."

"You should stay out of this," says Three. "I don't need anyone else to fight my battles. You might have figured out some of my tricks Twelve, but if you push me, I can escalate a hell of a lot further and faster than you can."

"That's not helping," says Bina, running a hand across her forehead. Did this kind of crap always have to happen when she was exhausted?

"I don't feel particularly inclined to be helpful right now," says Three, not being particularly helpful. "She thinks I'm a monster!"

"Yeah, well," says Bina, fed up with this. She stands up, never a fun thing these days, and leans on the table. "Let's not kid ourselves, so do you, sometimes. We all do. Or have you forgotten what brought us to this damned city in the first place." 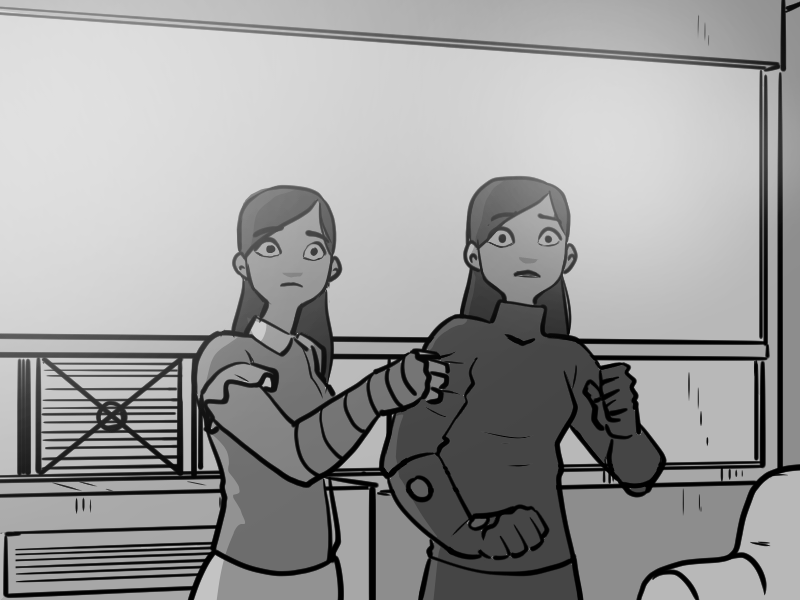 Three and Twelve stand there, caught momentarily off guard. That gives Bina a few seconds to check on the other people in this room. Emmie is standing, hand raised, off balance, unsure what to do. Both Amie's just watch, surprised, scared to say something that will set everything off again. Great, not going to be a lot of assistance from that quarter.

"I don't need any help from you," she says, dropping Three's sleeve. The two step away from each other, glaring. In seconds, they'll be fighting again.

It's not much of an opening, but she'll not spoiled for options. She might as well give it a try. With a groan, she grabs her cane and, with some considerable effort of will, turns her back on herself, twice, in one movement.

"Where are you going?" asks Three.

"I need to talk to Twelve, outside, alone," says Bina, pulling the door to the hallway open and stepping outside. "Now."

She has no idea if it'll work. It shouldn't work. It's a transparent ploy if she's ever seen one, but if they're anything like her, and they are, both of them want this over with desperately, and this gives each of them an out.

"Everything all right?" asks Kendra. "I heard shouting but…"

"I'm going to need the hallway I think," says Bina.

Kendra looks like she's about to ask more questions but then Twelve stamps out behind Bina, brows furrowed, fingers flexing at her sides in barely restrained anger and anxiety.

Kendra gets up without hesitation, still holding the Not-Yet and nods. "All right," she says. "Keep it down though, the Korean lady at the end of the hall keeps peeking out at me and glaring."

"Thanks for the heads up," says Bina, shooting her a quick smile.

Kendra gets up, leaving the chair. She steps towards the door then hesitates. "You uhh… you want…?" she makes a vague gesture with the Not-Yet, and Bina can read the expression clear on her face. Twelve looks mad, is Bina sure she can handle this situation without some kind of advantage?

Bina can't stop herself from glancing at Twelve before she shakes her head. "No - I'm good. I just need a minute."

"All right," says Kendra, slipping back inside the apartment. "If the naughts show up, scream."

Then she's gone, leaving Bina alone in the hallway with Twelve.