Primary Temporal Position: 2017
Reset Temporal Position
"All right!" says Amie-Five, rubbing her hands together and sitting on her bed. She looks around, at Emmie, Bina, and her time-clone, and frowns. "Where's Kendra?"

"She's out keeping watch," says Emmie, leaning against the wall and folding his arms. "Don't worry, I'll fill her in, after you've told us."

Amie looks back and forth, confused.

"For monsters," explains Bina. "She's watching for monsters. We've been here a while."

At her continued expression of confusion, she takes pity on herself. "The naughts always find the Bina's," says Amie-Thirteen. "Especially when there's more of them." She pauses, and realizes how ambiguous that last sentence is. "More Bina's, I mean, not more naughts, though more naughts does seem to help."

"They're coming here?" asks Amie, and Bina can't tell whether she sounds more worried or excited.

Three had finished her story a few minutes before, and Amie, having checked her notes she'd been taking, had called everyone from Loop Thirteen into her room and firmly shut the door. 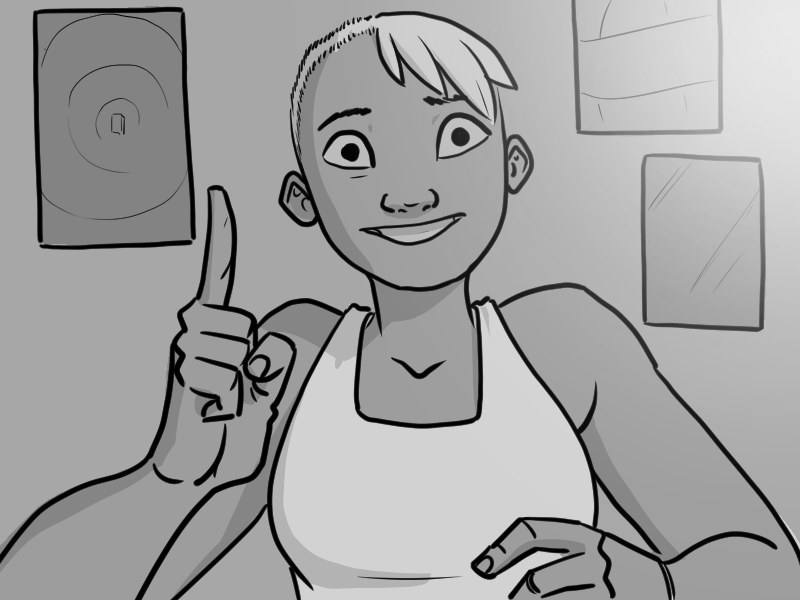 Of course not. That would be too easy.

"But you're the only ones," she explains, shuffling the loose leaf papers she has on her bed. "The others are synced up, more or less, as Three didn't really pay much attention to Twelve until she started building her inter-loop time-machine."

"Are we ahead?" asks Emmie.

"We're ahead," says Bina. "Otherwise she wouldn't be talking to us. Three hasn't talked to us yet, right?"

"What?" asks Bina, taking some comfort that everyone is confused now. "But she looked so tired before."

"Ah… she mentioned that," says Amie, shuffling the papers on her bed with more vigor before producing one of them and holding it up. "She took a vacation."

"She what?" asks Emmie, unsure whether he caught that correctly.

"That's what she said!" says Amie, rocking back and forth in delight. "In exactly that tone of voice! Gosh, this is fun isn't it? It's like a puzzle, but in multiple dimensions. I think I can probably make a graph of all this, and-"

Amie cuts herself off and asks, "Did she… explain why?"

"Ah - it's because after she talked to you through the viewers, she went back and looked into some anomalies in the other time-lines, and realized that you were almost certainly mucking about in the other loops - which meant that pretty much anything that happened after that was your fault and any attempt she made to fix anything would end in inevitable disaster!"

"It does?" asks Emmie, looking down at Bina, eyebrow raised.

"Yeah," says Bina, looking down at her hands holding her cane. "If I can't figure out how to fight, I run." She looks back at younger-Amie, still fidgeting with her notes and papers. "She came here though."

"Yeeaah…" says Amie. "She was kinda cagey about that, but she was adamant that she hadn't seen you in this timeline. Just Twelve. You were a surprise."

"So how are we ahead of her then?" asks Bina. "We've only had the one conversation?"

"Ah! True!" says past-Amie. "But, and I'm quite proud of figuring this out, you haven't actually talked to her twice, but you're working with an inevitability that you haven't untangled yet. If you don't untangle it properly - you get a big nasty paradox."

"An inevitability?" asks future-Amie. "You mean, like the pizza?"

"We have a few of those still running," says Bina.

"We solved one of them," says Amie. "Kendra got the password…"

"Yeah," says Bina, trying not to think about what that actually means. "But someone still needs to sabotage Gregor's time machine in the hospital…"

"But that's not the one we're talking about," says Emmie, without hesitation. "She's talking about the lego piece. Right?"

"Yeah…" says Amie, shooting a miffed look at Emmie for stealing her thunder. "It's the life-boat! You, uh, you haven't asked her to make it yet, and, based on your description, you didn't know what it was going to look like before you got it, so…"

"So we can't tell her what it looks like, or how it works," says Bina.

"No," says Amie. "But you probably should ask her for her to get to work on it. I can't imagine you're going to run into her too many more times before your TARDIS stops working."

"It's not a TARDIS," says Bina, automatically.

"It kind of is," says Emmie. "Is that everything we have to watch out for?"

"Aside from the fact that they want to kill each other?" asks past-Amie.

"I think that's being unfair to Three," says future-Amie. "She mostly just wants to be snarky I think."

"Aaand I'm just realizing that we left them alone out there," says Bina. "Come on - let's make sure they haven't bitten off each other's heads yet."

Through the door of Amie's room, the sounds of bickering, that everyone had been ignoring, begin to escalate into full-blown argument.