Primary Temporal Position: 2016
Reset Temporal Position
"Not interested in talking, huh?" asks Kendra, as Emmie comes back into the kitchen after having been on the balcony for only a few seconds.

"No," he says, getting a glass from one of the cupboards and filling it in the sink. "I'm not sure what's going on there, but she's… not doing great."

"She's not… going to do anything drastic do you think?"

The two of them look out at the window, where Twelve leans against the balcony railing, looking out over the city as the summer afternoon crawls it's slow and meandering way towards evening.

"No," says Emmie. "At least, I don't think so. These last few days have made me really wish I'd gone into psychology, not anesthesia."

"Would that really help?" asks Kendra, trying not to smile. "I mean, I don't think there's a model for 'I think my time clone turned herself into an evil alien bug.'"

"Fair point," says Emmie, nodding in a way that lets her know that he gets the joke, but is also taking her point dead seriously. "This is sort of uncharted territory."

"From pretty much every angle," says Kendra. "Yeah."

In the living room, Amie and Three are talking about what is probably the only truly safe topic of conversation, school. Judging by Amie's expression, Kendra is pretty sure the conversation isn't going well.

"I'm worried about the naught," says Emmie, leaning against the counter beside Kendra and pressing the glass of water to his forehead. The apartment, despite it's window fans running full blast, is very warm. "The one we brought with us. We just, sort of, left it there."

Kendra, who had been worrying about the same thing, winces. "It's fine," she says. "We have the Not Yet, if it shows up here, we should be able to get away."

Emmie looks at her out of the corner of his eye, and raises an eyebrow. "I'm not talking about that, I mean - the Bina from this loop. She wouldn't even know to run."

"Oh that," says Kendra, relaxing a bit. "That should be OK. She's got no unlight. If it's coming anywhere, it's coming here."

The door to Amie's bedroom opens, startling everyone. Bina walks out, followed by a less enthusiastic looking younger Amie.

"Err - next?" she asks, looking in Three's direction. Three stands up, brushes off her gauntlet, and looks first to Twelve, who hasn't moved, on the balcony, then to Bina.

"I just hit the highlights," says Bina, sounding tired. "I suggest you do the same."

"All right," says Three, then, turning to Amie. "Lead the way madame."

They vanish into the bedroom, the door clicking closed behind them.

Bina comes into the kitchen and leans on the counter. Her skin is a pasty gray color that Kendra doesn't like.

"Please," says Bina. "What are you two talking about?"

"The naught," says Kendra. "I was just telling Emmie that Five should be fine, because she doesn't have the unlight."

Bina nods, "That - and I told it to move really slowly. I doubt it's made it's way out of the construction site yet."

Kendra hadn't thought about that.

Amie, their Amie, leans against the counter from outside, she looks towards the closed door to her room, then whispers. "That was a weird conversation!"

"It looked it," says Emmie.

"I thought talking about school would be safe," says Amie. "But she barely remembers anything. We ended up spending most of it talking about Watership Down. I don't even like that book."

"I didn't either," says Bina, between gulps of water.

Nobody says anything for a few minutes. Out on the balcony, Twelve hasn't moved, save for her hair, where the wind catches it, pulling it into ribbons and swirls.

Eventually, Amie asks "How long do you think Three is going to be?"

"How did you get through your story so quickly?" asks Kendra.

"By being mean," sighs Bina. "I just went through the inter-timeline stuff. I skipped everything else."

"No!" says Amie, aghast at this mistreatment of her duplicate. "You didn't tell her anything."

"It's your job to make sure she doesn't," says Bina, leaning heavily on her cane as she walks into the living room. She flops down onto the couch with a groan. "I'm serious," she says. "That would muck everything up."

Kendra goes to the hall closet and retrieves the Not-Yet from where they'd stashed it for Amie-Five's arrival. She checks it over, making sure that the fight in the electromagnetic lab tent, and the construction site, haven't damaged the fragile internal components.

Satisfied, eventually, that everything is in order to Nine's specifications, she brings it over to Bina, who is slumped over on the couch, eyes half closed.

"Can you charge this?" asks Kendra, holding it out. "I'm going to go sit in the hall. Keep watch."

Bina opens her eyes and gives her a quizzical look as she takes the not-quite-weapon. "I just said, I don't think it's going to catch up with us." Inside the device, a disk made of four tiny slivers of a second starts to spin, and an LED turns on, it's glow bent into a supernatural spectrum by the proximity of Bina's right hand.

"There's still our two stalkers," says Kendra. "They didn't bother us the first time we came through this loop…"

"So maybe they bother us now?" asks Bina.

"Bring a chair," says Bina, pointing at the four chairs arranged around the dining table. "Don't sit on the floor."

"What are you gonna do if someone comes up the hall?" asks Amie. "Like, someone who lives here? Mrs. Pak, at the end of the hall, she's in and out all the time."

"I dunno," says Kendra. She picks up one of the chairs, and Emmie opens the door for her. "Maybe I'll just zap them."

"You going to be OK?" asks Emmie, as she passes him backwards holding the chair. "Out here alone?"

She steps closer, close enough that, the others can't hear. His hand finds hers. "And I don't like how Bina looks. You should be in here."

Emmie frowns and looks back at Bina, still slumped on the couch. Across from her, on the table, Amie is trying to remember how to play solitaire with a real pack of cards.

"Yeah," says Emmie, his voice a little clipped. "Yeah, today's been kind of a lot for her."

"Running from monsters," says Kendra, putting on a smile. "It's a great work-out, not so great for recovery."

Then she darts forward and kisses him on the cheek, a quick little peck, as she slips out the door.

"Seeya," he says, his hand slipping out of hers. "Yell, if something happens."

"I will," she says, as the door clicks closed.

Today has been kind of a lot. 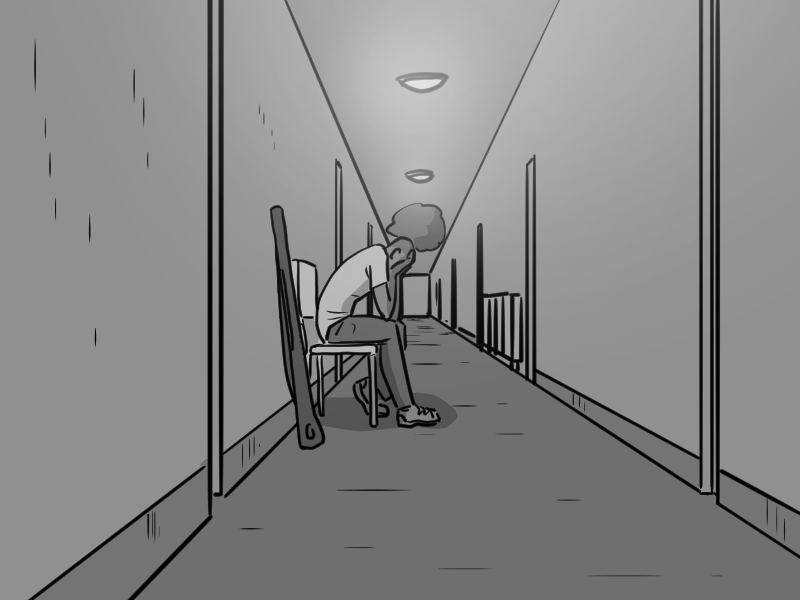 After a few moments, she leans back in the chair and sighs, then she puts the Not-Yet on her lap, and she waits for the monsters.

That's about 1200 words, rather than the 250 words which is my average for all night laundry.

As I've been saying for literally years, I really need to finish this project, so I'm going to see what happens if I lean a bit more heavily on words than on the ratio of words to pictures I've been using recently.

This may be a bit much to read, and it might be too much to write as well, but like most everything I've been doing since I started this 2016 days ago, it's an experiment. Let's see how it goes.