Primary Temporal Position: 0181
Reset Temporal Position
Kendra keeps talking and Bina realizes that she's not really talking to her. She's just talking because she's terrified and she needs to talk. Bina knows the feeling. She wishes that she could do the same thing.

"I didn't see the shovel guy for like an hour after you left. You went out the back door right? It was weird. He seemed like… upset when he heard the door. No. Not upset. That's not right."

"It was weird. Like, if I were a murderer guy, and I were in the middle of, you know, DOING MURDERS, I would be extremely worried if one of my victims did a runner, but he just looked… I don't know. It was weird."

"He was like… resigned? Like he was hoping it wouldn't happen, but he was expecting it anyway."

Dregadude:
>Bina: does the building seem to be getting any more unstable? 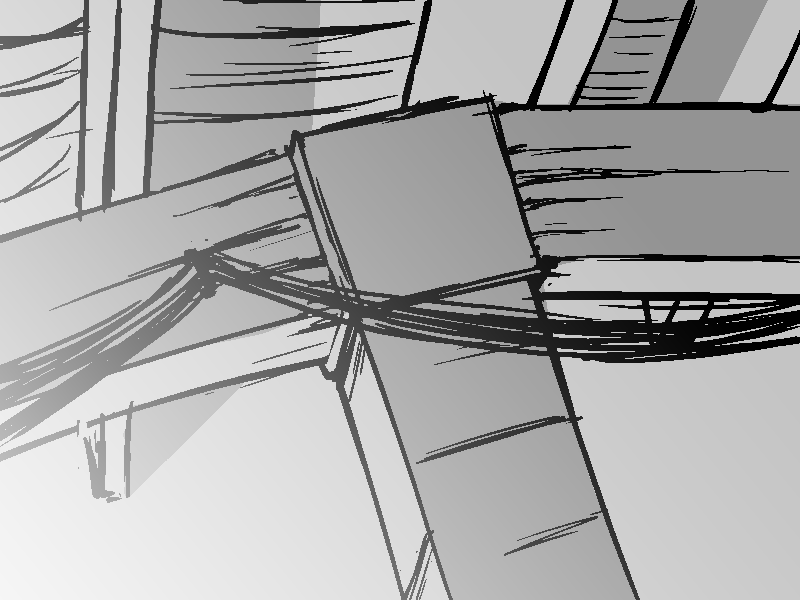 Was that big crack their before? She can't remember.

"When he left, at first I thought he'd be back immediately, maybe with you under an arm or something. But then he didn't come back."

"There was a clock on the wall, so I could, you know, count how long he'd been gone. At first at least, about twenty minutes after he left there was a sorta brownout or something. I thought it was a brownout but now I'm down here and see how wrecked this place is… maybe there's a short somewhere."

"Anyway, after the brownout, the clock stopped, which is… a little weird now I think about it. It was one of those little ones. They usually run on batteries."

The ceiling has been making ominous creaking noises since she woke up.

"I was starting to hope he'd forgotten about me, or got caught by the cops, or had a heart attack, or was abducted by aliens or something."

Are the creaks getting louder?

"Then he came back with you slung over his shoulder."

"You were completely out of it, like totally floppy, and I thought you were dead. It was like , 'Oh well. It was a good show Kendra, but now I've seen him with a dead person and he's never going to let me go. He's going to kill me for sure. He's got too.'"

Something is digging at her. It's like little bits of her are all screaming but she can't quite hear them.

"But then you were alive."

[video=youtube;gnwywMpPbjg]http://www.youtube.com/watch?v=gnwywMpPbjg[/video]
She'll know what you mean.

What in the heck is THAT?

This is not the last one of these.

Haaah! These are great! Thank you so much!