"What?" says Kendra. "I just sent her forward to the PTP using a time machine that isn't the Moment - so our tension is released, she's in the right spot, and we don't have to muck around with handing things to our future selves which will definitely cause the world to explode."

"Won't she just come back to now if we turn the machine off?" asks Amie. "What are the rest of us going to do?"

"That's only when you're jumping away from your PTP," says Kendra. "If you jump to your PTP there's no tension on the line, nothing for your time machine to do. It just opens the way."

"This is a time machine?" asks Four, struggling to keep up. "But it's so little!" 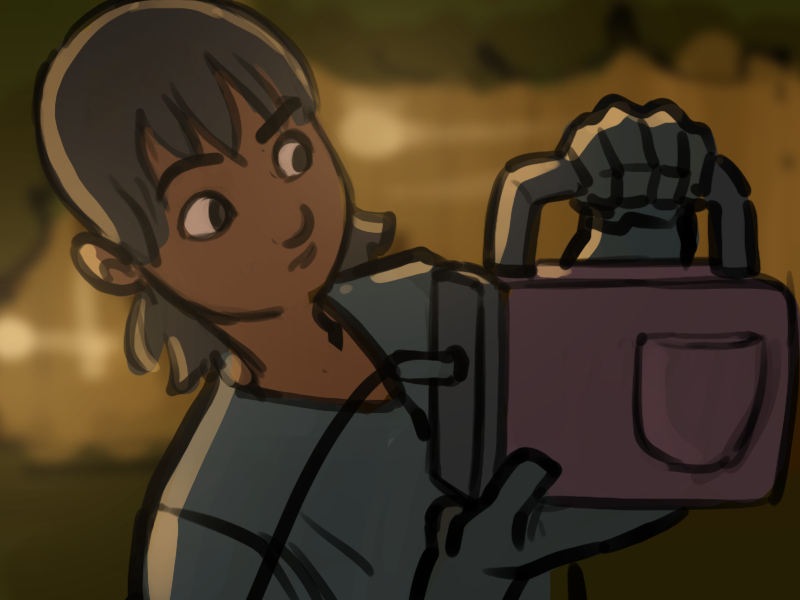 "And I thought it was out of batteries," says Emmie.

"It ran out of batteries, so we replaced the batteries with some of the extra batteries we brought with us," says Kendra. "Why would we bring only one set of batteries? Then we'd only be able to use it once?"

"That is a valid point," says Emmie.

"Always carry extra batteries for your time machine," says Kendra. "That's lesson one of practical time travel with Kendra. That and do not look directly into the green light. Actually, that is lesson one, this is lesson two. Or possibly lesson two is good shoes…"

Austin Cote Williams:
I love how everyone has plans and ideas to take action and they all just do them without talking them over with everyone else and it somehow has not backfired yet.

"Can we maybe slow down on the unilaterally taking decisive action thing?" says Four. "You guys are making me dizzy and also, kinda, alarmed."

"Emmie did it first," says Kendra.

"He called a cab," says Four. "You just punched a hole through time."

"OK, that's fair," says Kendra. "Now come on, we need to punch another hole through time to catch up with her."

So the thing that Kendra threw Four in the previous page was the other half of the time machine, which she's holding in yesterday's panel. Kendra did this because Bina has the unlight and the time machine doesn't work without Bina touching it.

Thankfully, she has a spare Bina, as well as spare batteries.