Bina braces as best she can and then with a one-two-three, Kendra starts pulling. 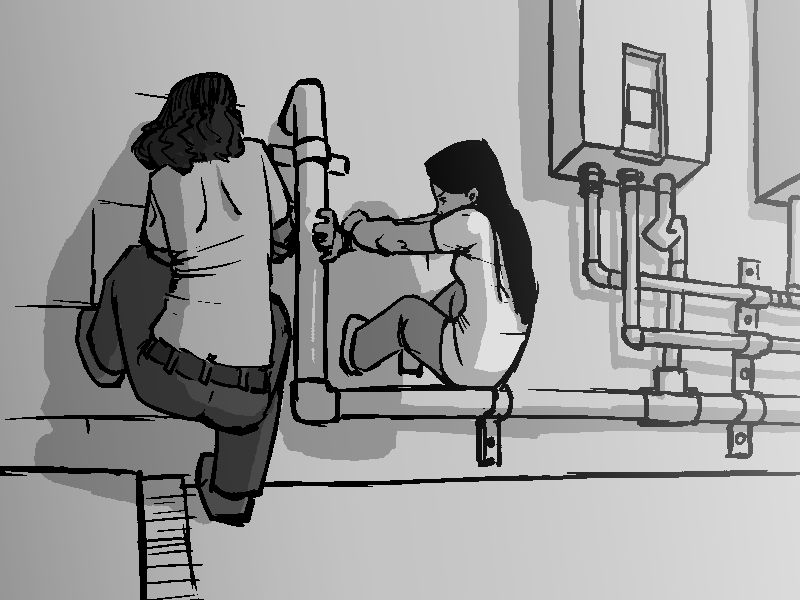 The other woman is strong, significantly stronger then Bina is, and for the most part Bina just tries to hold the handcuffs steady. Her wrist starts hurting as the bones grind against each other.

A familiar sensation, and not a welcome one.

tegerioreo:
That "pipe" is electrical conduit. See it going into the breaker box? Pulling it loose is just going to expose you to lots of torn-apart wires, which is probably not a good idea unless you are certain the current is shut off.

Bina looks over. The pipe is attached to three boxes. Two smaller copper pipes run parallel to the large steel pipe that traps the handcuffs. 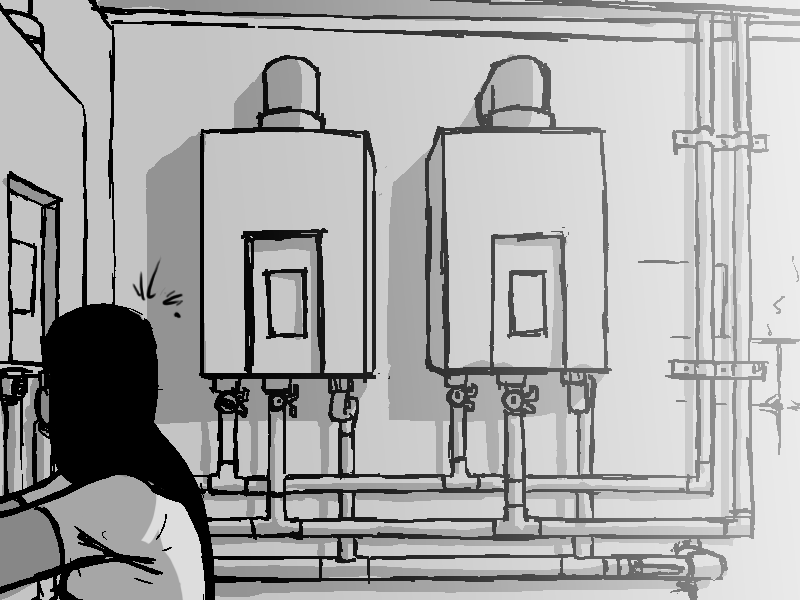 Bina's pretty sure that those things are tankless water heaters, not electrical boxes. She's never heard of using three of the things at once, but then again this is a laundromat. They must use a ton of hot water.

So three pipes. The two copper ones will be full of water. One coming in with cold water, one for the hot water going out, and this big pipe for… what? Drainage?

Come on you blasted handcuffs! Come on! BREAK!

Why would you need a pipe this heavy for overspill?

Bina clenches her legs together. She shouldn't be thinking about the word 'overspill' right now. That might lead to… accidents.

Fuade:
>Actually, feel the pipe first. Make sure it's not full of boiling water or something.

Bina touches the pipe. It's cold. So definitely not the hot water pipe. And probably not the drain.

When she looks back at the water heaters she notices that they're attached to this pipe by flexible tubing. Not by metal fixtures.

That's weird, you don't use flexible tubing for water.

You use it for gas.

Fun fact. I pulled some references for these water heaters off the internet while I was doing the location design for this basement and I honestly thought that the third pipe you see attached to these things really WAS a drainage pipe.

The fact that it is actually a gas pipe is something I only figured out while writing this update. I was looking for more references and I found a diagram that shows how they work.

I would like you to ponder for a moment that Bina has managed to get chained to a pipe full of explosive gas… by accident.

Not even the I intended that to happen.

I'm beginning to think that the universe really DOES have it out for her.

Dalmationer:
Hey, Jack, have you ever watched a fantastic fear of absolutely everything?

I have not, but Simon Pegg is great, so I'll might have to check it out.