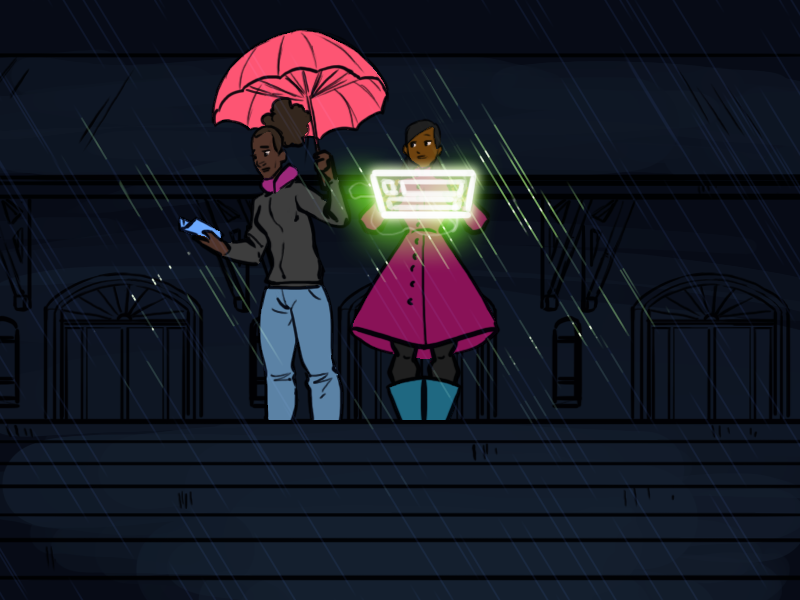 "It's crappy time travel," says Emmie. "Violent time travel that tears holes in the world and is so dangerous that it nearly gets someone killed every time you use it. Worse, it only works within a single day. Whatever regret Bina has that was strong enough to convince the Botfly to give her this power, she can't go back and fix it. Instead, she's stuck here, in this day, with her regret, repeating it over and over and over again."

"Yeah, except rather then getting more and more control over the situation, things keep getting worse and more chaotic."

"But that still doesn't explain what it did to you."

The Green Lady:
+1 reader! I think I broke the longest-time-taken-to-read-the-archive record, having started back in April after seeing an ad on Buttersafe. Maybe I took so long because I was trying to read every comment. I gave up yesterday at page 1413 because it took about 10 minutes per page and I was worried I'd miss the end, and then I caught the rest of the way up, and just about fell off my bench when I saw the missing buttons.

Thank you so much for doing this for us! Hats off to a certified Master Calvinballer (I just ran inside, grabbed two hats, and put them on so I could take them off again!) for making such a hilarious, thrilling, creepy, immersive, gross, heartbreaking, enthralling, uplifting, Lego-filled, confusing comic and for keeping it going every day for over four years. (Just one more and I'll be able to make a Ziggy Stardust reference!) It has kept me up at night, lowered my concentration at school, and played with my emotions, for which I sincerely thank you. The art is amazing and only gets better when you change styles, the story is top-notch and I admire your dedication to it, each scene overflows with reality in a way I don't think I've seen anywhere else, the characters are perfect, each with their own quirks and flaws and vibrant personalities and problems, making them feel real, and the pacing is amazingly well-kept even with such a constraining update schedule. I think it's safe to say that this is one of the best, if not the best story I've ever read. I can't wait to start suggesting, and I'm excited to read (and dreading) the end, however it pans out!

Edit: and, of course, after posting this I almost instinctively scrolled back up to hit "Next". This is going to be painfully slow, isn't it?

Wow! Thank you so much for reading this comic and saying such kind and complementary things. This made me really happy. Thank you.