Primary Temporal Position: 1473
Reset Temporal Position
xooxu:
Kendra: you are a seasoned vet in all things nope now. You don't need to look. Really. You don't. If Bina is freaking out, you know it's something to freak out over, and you just need to move your legs! Go go go!

Kendra doesn't mess around, when she sees the expressions on her friends faces she runs.

ForestGardener:
Too late. Remember how fast they are?

Or, more accurately, she tries to run, but the naughts are many things, and one of those things is fast.

She barely gets the umbrella up in time. 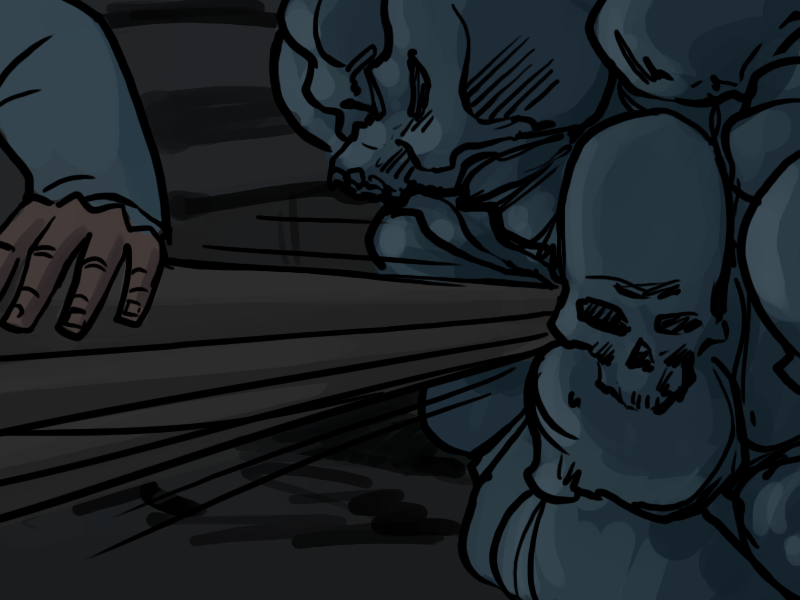 The butt end of the umbrella hitting the naught makes a sound like someone dropping a pipe into wet concrete.

Reggie Sharpe:
These pages have been really short lately. Not that I'm complaining, I'm just curious as to what's going on.

How appropriate for today. :)

The answer is pretty simple. Action! It is kind of the perrenial problem of having a chronologically based update schedule. Action requires more… well actions and in this style, those typically involve drawing a panel, which can take a while, especially if they're complicated or have detailed backgrounds.

A dialog scene can get by with one panel for a lot of talking. Usually it's better if there's more, to give us things like body language, spatial relationship and expressions, but you can pick just one or two points and draw those. I tend to lean on that a bit heavier then I'd like, but it works pretty well for most scenes.

In an action scene… not so much. I kinda have to draw all the bits. So as things happen faster, there tends to be less text. The upshot of this is that it reads faster in the archive, but because I can still only draw the one or two panels per day, it tends to appear to be really short if you're reading along.

Something to think about if anyone is planning on creating their own adventure like this. If you keep the camera static and you choose a simplified style, you can create a lot of panels in a very short amount of time and you can aford to do more, and more complex, action. That is not something to sneeze at. See: Problem Sleuth, Homestuck, Lucidstuck, Rubyquest, etc.