masterax2000:
Kendra: ask why Bina was freaking out about this.

"But you were just freaking out about -"

"Well… Amie told me about the other loops, and then I looked at that list of what the other Bina's were building, which does kinda paint a picture where we're the ones who dropkick all the people in the factory out of the calendar."

"Which was horrible and awful and scary and a lot of responsability and holy crap I didn't want to do it, but the big thing, and most importantly, is this - Hello! My name is Bina Miryala." 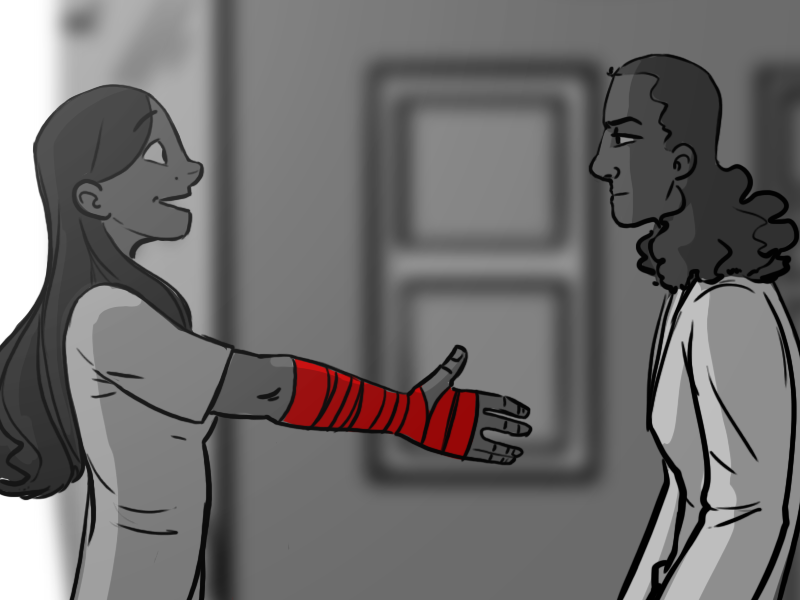 "I have a serious anxiety disorder that, despite medication and therapy, results in frequent panic attacks that significantly disrupt my daily life. Nice to meet you!"

"Hello Bina…" says Kendra, ignoring Bina's outstretched hand. "But seriously we probably have to do the killing-them thing. Despite the fact that it makes no sense, you've kind of convinced me that it's necessary, and if I look at this list it really looks like all the tools to do this are -"

"I know! It's totally impossible, absolutely mandatory, and we're not going to do it."

"But if we don't ensure that they're erased from history then -"

"No, Kendra, god - think about it - we are going to have to do so many impossible things to pull this off that I'm just going to stick that one on the top of the stack, OK?"

"We are not going to kill the people who absolutely have to die! We'll figure it out. Everyone lives through this, all right? Everybody lives."

"All right, fine," says Kendra, giving up. "Everybody lives."

Xam:
Zach, all of yesterday I had been thinking that Bina had came to a horrifying realization and then you do a complete 180 to show that B&K now have an actual workable plan for confronting the Botfly! I was wondering how anyone could possibly end this story satisfyingly without a cheap deus ex machina, but you have now shown a glimmer of a magnificent ending to come. I am so glad for staying up late to read this post as soon as possible.

Thank you Xam, and to everyone else who said nice things today. We haven't stuck the landing yet, but we're getting there. That being said, I never really thought I would be able to square the circle on the promises I made on this page, but we got there. It took 1234 days, but we finally got there.

Side Note: To my fellow Calvinball players out there. No matter how attractive or cool your idea is, seriously consider before making the decision to expand the scope of your project to get yourself out of a jam.

You could end up spending the better part of three and a half years paying it off.

fkmclane:
I'm not great at giving suggestions (though I might give it a try soon), but I've been following this story for a while. I haven't posted here yet but feel like this is a great page to do so.

Your ability to create such an intriguing story through the use of suggestions and your own imagination is absolutely phenomenal! Plus, I love all of the different art styles and your delivery throughout the story. To keep this short, +1 reader who is very excited to see where this comic goes from here.

Thank you for reading fkmclane! I love suggestions, but I also love hearing from the people who I don't see very much, who read and participate that way. Thank you so much for reading, and thank you for your kind words.

Chaz Wallace:
So, Zach ,glorious creator, on the days like yesterday where the comments attempt to theorize on things and lead to 50 or so comments, do you enjoy that and/or get ideas thanks to it on how to explain things?

We Launderers do sometimes seem to get out of control on comments and theories sometimes. Least I know I do.

I do! I really enjoy seeing what you all are thinking about what's going on. Even when I don't take a suggestion, seeing what confuses people or what interests people, or where people are getting hung up is really helpful, and often ends up effecting the story in direct (like today, a lot of people didn't understand why Bina was freaking out, so a lot of the update today is about that), and indirect ways.

Specifically, I want to mention Asthanius comment yesterday. This one:

When B3 looked forward, she locked in the events of loops 4 through 12. She said that she made a point of not looking into the 13th loop. Our Bina (B13) is the first Bina who can do things that haven't already been foreseen.

I'll say that again: B13 is the first Bina who can do things that haven't already been foreseen.

Everything that B4 through B12 tried, regardless of mathematical probability, failed. Everything failed because the universe had decided that B4 through B12 would exist, and the events of those loops were all set in stone. None of them could escape the loops or change the past or present because the universe literally couldn't let any of that happen!

We can't take any of the other Bina's plans at face-value; they haven't been executed in a non-predetermined environment.

I really wanted to include this one in the main story, but it was so long and there wasn't a chunk I could extract to make a clear connection to the action, but direct the action it did.

The revelation Bina had about the loops, that I knew before going into this scene, but her reaction to it was, in many ways, determined by this comment.

I was originally going to have Bina's rather morose take on what's going on to continue, I was going to have her mostly accept the idea that they would have to follow the plan, that they'd have to make sure that Josephine and company go boom, but Asthanius excitement here changed that. It made me realize that of course, once she got over her panic, Bina would be excited about this. Of course she's see the positive possibilities.

Of course she'd make the decision she made today.

I read all the comments, even if I can't put them in the story.