After that, they should ascertain if anything changed during their jaunt to the past. Did people still witness a bunch of cops get murdered by a dog the size of a tank? Did anyone see time crack like an egg?

They enter in through the emergency entrance, which is just up the drive.

"Where is everyone?" asks Kendra. 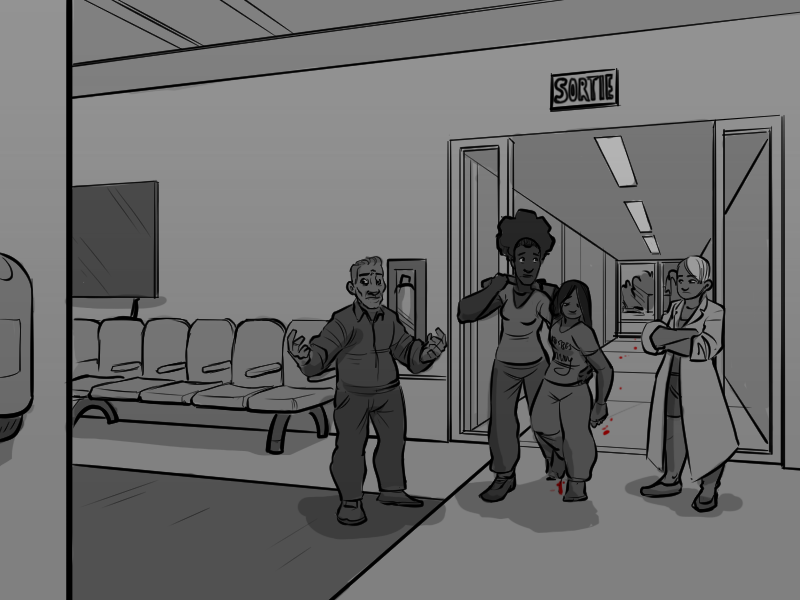 "They cleared out," says the man, who still has not introduced himself. "For the most part. There should still be someone over there in admitting but - well I can see your friend is bleeding, otherwise I'd have suggested going somewhere else. There was some kind of gas leak here earlier."

"It seems to be gone now," says the man. "Hazmat came through here about half an hour ago and cleared it, so you're not in any danger, but I they're still diverting ambulances to the other hospitals nearby."

"What kind of gas leak?"

"They told me it was nitrous oxide released when the basement flooded earlier but that doesn't sound right to me. Nitrous makes you happy, it doesn't cause… this. There was some kind of a panic."

"Was everyone OK?" asks Bina.

"From the gas? I think so, but then something else happened on the street outside. An explosion or - well, something else. Nobody seems to really know what happened but several people are dead. Look, you should get your foot looked at, then all of you should get on home. It's crazy out today."