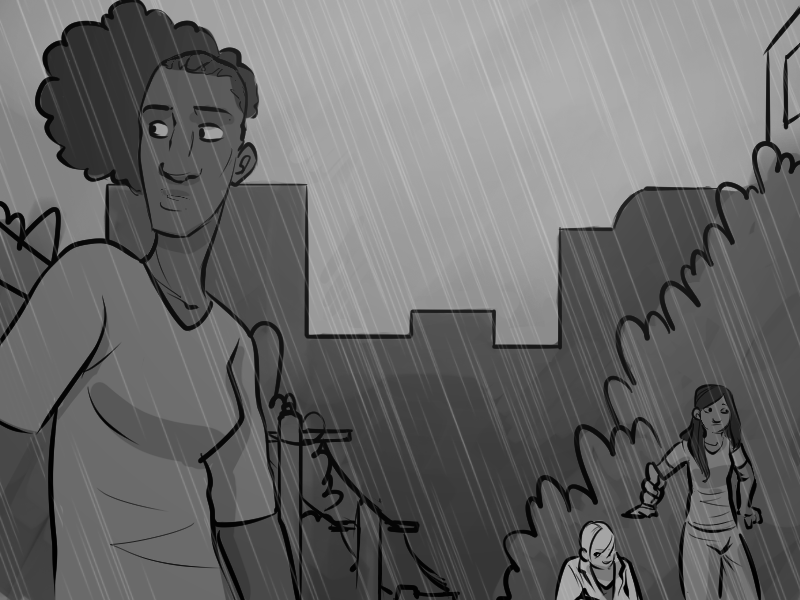 Hey everyone! It's day 1300 and also the end of that scene in the train tunnel so I thought I'd say hi to everyone (including all our new readers over the last few days, I know some new people popped up, thank you for reading!) and pull back the curtain a little again.

This last scene sure was confusing wasn't it?

I realized that something was going wrong about the point that they got down the stairs on the subway, but I should probably have recognized it earlier.

I think the reason this part confused people so much was that the main threat of the scene 'If we don't prevent a paradox that alters our past, we could get brain damage' and the solution 'we have to cover up a murder scene' are both, not to put to fine a point on it, space magic.

This entire sequence and scenario hinged on space magic. There are a lot of rules for how time travel works in this comic, and they were all interacting through this sequence. I think about these most days when I'm writing, but they haven't been important to the narrative since Bina and Kendra rescued Elizabeth, which November of last year.

This same threat, the threat of paradox, worked before when Kendra and Bina were tidying up the office where Kendra was held prisoner, but I think it worked there because our protagonists had been there before, and it was directly connected to something that we had all already seen, but this one, the one in the tunnel… didn't.

I'm playing Calvinball, so with most scenes, if I had the opportunity to go back and smooth things out and edit, I probably would, but this is a chapter I would rebuild from the ground up.

My advice to everyone (including myself) is to learn from my mistakes. In this case, I think the take-away here is to not build a scenario where both the threat and the solution to that threat are complex and abstract.

Having one of those two things be abstract can work great. You could have your characters trapped in a room where they have to solve a puzzle. The puzzle is abstract, possibly related to whatever the space magic in your story is, but their goal, to get out of the room, is very grounded.

From the other direction, you could have someone trying to complete a symbolic action of some kind, but have them need to do that in a practical way. Bina trying to climb the stairs here is an example of that from this story. Her goal is complicated and based on space magic (use a sequence of three time machines to catch a person falling to what we have, up until now, thought to be their death) but the actions she's taking are practical and simple. She has to climb the stairs and assemble the time machine before the deadline.

Gotta do more of that, and less of this.

As always, thank you for reading and commenting. I hope everyone is safe, and warm, and happy, as we head in to the longest nights of the year.