Yeah that's not happening. Bina's not touching that thing again if she's got anything to say about it, and right now, she does.

Bina drops down the side of the rough earth ramp.

Fuade:
Is that perspective throwing me off or is that thing bigger then a truck now?

Bina spares a few seconds to look at the dog-thing.

It DOES look bigger then it did before. Not as big as a truck maybe, but big. Polarbear big. 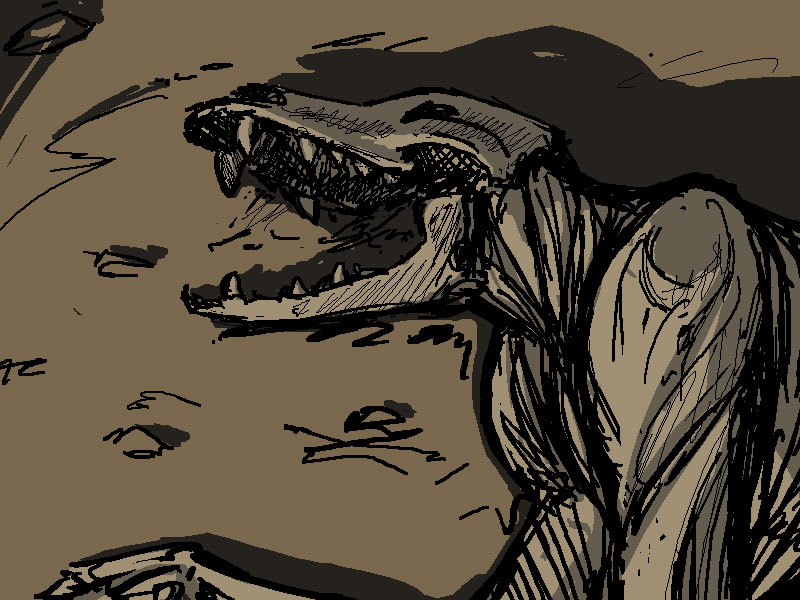 It also… looks inert in some unidentifiable way. It's jaw is strangely unhinged, and partially buried in the loose earth of the dig site. Did it try to swollow something too big for it?

She's about to look closer when, behind her, she hears the slam of the laundromat's back door.

Dang, Gregor is fast, she's only got a few seconds before he reaches the end of the alleyway where he will be able to see down into the construction site.

Kyky25:
>Either keep running or hide. You don't want Gregor catching up

That's the question isn't it, run or hide? She wants to run, but she's not sure that she can.

Her knee's, her hip, even her lower back, from when she got thrown against the wall in Josephine's office, all throb dully. Her right arm throbs too, though with an itching, burning sensation, rather than pain. That's maybe good news, but, considering how everything else has been going, it probably isn't. She has conflicted feelings about taking a look under the bandages.

Being honest with herself, if she runs for the other ramp, she's not sure if she'd even make it all the way across the construction site before her legs gave out. And that's if she doesn't trip on a piece of rebar and impale herself in the dark.

Even IF she makes it to the other ramp, what then? That's not concrete over there, just packed earth, like the thing she just slid down. It's not exactly a good running surface, and she's wearing her slip-on tennis shoes. They're just about enough for doing the laundry in the middle of the night, but not much else.

Then there's the gate to consider. If it's locked…

To make matters worse, the sky is doing that city thing, where the lights from downtown reflect off low hanging clouds. It's not bright, but there's more then enough light for Gregor to see her.

It looks like the sky is trying to screw up the courage to start raining. Wouldn't that just be perfect? Eurgh.

On the other hand, there's the danged dog to think about. It looks dead, but then again, it never looked very alive to begin with, so who knows? And then there's Gregor. He might not be right in the head just now, but he doesn't strike Bina as an idiot, and he's clearly been out here in the construction site before.

Hiding doesn't solve the problem. It just prolongs them. Maybe she could break into one of the portable offices? They're a long way off, on the other side of that sinkhole. Can she avoid Gregor that long? She doesn't know.