"It was nutter," says Amie. 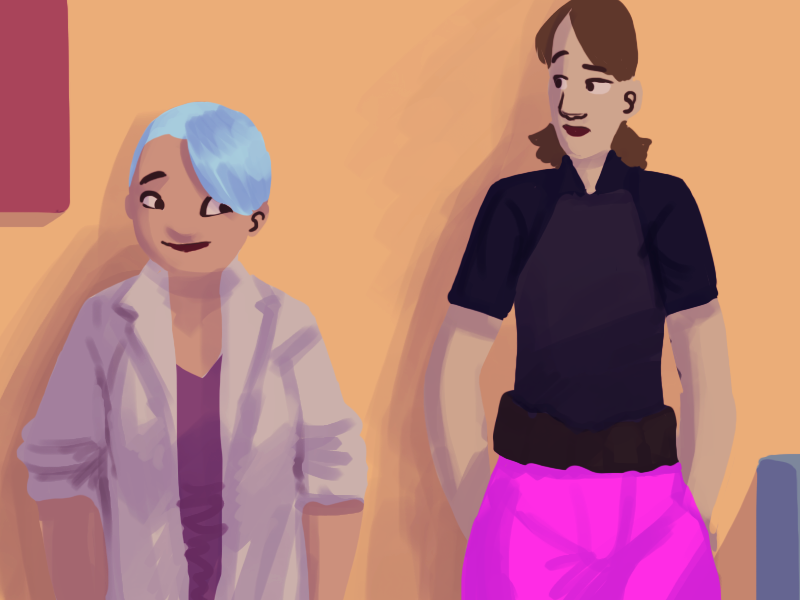 "You called me a nutter, not, you know, a loony. It's OK though - I wouldn't have believed me either. I would have wanted too, but whatever! I've just had some seriously good pizza and everything's OK! Also I was right."

"Yeah," says Edwards. "Err… You should still maybe duck any other cops you see."

"The Lieutenant," says Castillo and then trails off. "He's a good guy but he - he doesn't have much of an imagination. He showed up about half an hour ago and this situation - it's sort of a nightmare for him. A 'buncha respectable doctor-types talking about getting attacked by monsters? I feel kinda bad for the guy."

"Last I saw, he was sort of corralling everyone from the basement down on the first floor to try to 'get to the bottom of this'."

"What did you two tell him?" asks Amie.

"Nothing," says Castillo. "Which was… not fun. He's a fan of shouting."

"It wasn't that bad," says Edwards. "We told him that Agent Miller had ordered us not to talk about anything under some official secrets something-or-other and he needed to take it up with the spooks."

"How's that working out so far?" asks Amie.

"Pretty well, aside from the shouting," says Edwards. "The radio's are still barely working, so he hasn't been able to get in contact with anyone."

"Great!" says Amie, and then because she has no idea what to say next. "I guess."

There is an awkward silence. The medical machines in the room beep. Behind a curtain somewhere Amie can hear Kendra talking into one of the intercom phones.

"So… you're all time travelers?" asks Edwards, breaking the quiet.

"OK!" says Kendra, putting a hand on Amie's shoulder. "They're paging Emmie. He's out of surgery and he'll be here in a second."

Flashstorm:
I found ANL on an old reddit comics recommendation thread yesterday evening and have binge-read the whole shebang.

This thing is amazing.

Gosh! One day!? Are you alright? Please say you were at least adequately hydrated during all of that!

Wolph Strykes:
I can't remember if I've mentioned it before, but I truly do enjoy seeing all the different art styles you try! Especially beautiful job with the wet road in this one!!

Thanks Wolph! I'm kind of struggling with this one, so I'm glad it's working out. :)

Wolftamer9:
Aah, with all these new readers I've been thinking about rereading ANL, but I'd have to find the time. Worth it though!